Part of the Halsey-Weidler Streetscape Project calls for protected bike lanes that will be constructed between Northeast 102nd to 114th avenues along Halsey Street through the Gateway business district. These bike lanes push current street parking out from beyond the curb; cars will serve as a barrier between prospective bike lanes and updated sidewalks.
COURTESY PBOT

“The Halsey-Weidler [project] is about to go to construction. It’s starting next month,” says Portland Bureau of Transportation (PBOT) project manager Elizabeth Mahon. “It’s needed a lot of love for a long time, and fortunately, we now have the money to do all of it because of all the work everybody has done advocating at the local and state level.” The project has an expected completion date of May 2019.

Taken out of context, you might think somebody’s died, given the way public officials talk about Portland east of 82nd Avenue. And you’re not wrong. Halsey Street, east of 82nd Avenue, or “Outer Halsey” as it’s called at PBOT headquarters downtown, is home to two high-crash intersections (“Halsey-Weidler Streetscape Project breaks ground,” MCM June 2018). Outer Halsey is a priority area for PBOT when it comes to making safety improvements. This fall, its precedence will be much more visible—for better or worse.

On Aug. 9 at a Gateway Business Association luncheon, guest speaker Mahon updated an audience of Gateway business owners, as well as invested members of the public, on major PBOT projects coming soon to a street near you. 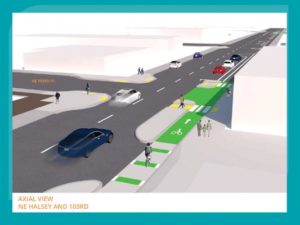 This is what Northeast Halsey Street looking east at Northeast 103rd Place will look like when the project is completed in May 2019.
COURTESY PBOT

As previously reported (“Mixed-use community proposed for 10.5-acre site in Gateway,” MCM July 2018), the Halsey-Weidler Streetscape Project is one of the most high-profile, last-minute fiscal solutions for Gateway, given its 2001 designation by the Portland City Council (with input from Prosper Portland, then known as the Portland Development Commission) as an “urban renewal district.” Upon its crowning, Gateway became worthy of up to $164 million in public improvements over a 20-year period. That 20-year period ends in 2022. From 2022 onward, the urban renewal district status would itself need to be renewed, and that’s unlikely. 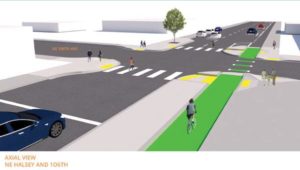 This is what Northeast Halsey Street looking east at Northeast 106th Avenue will look like when the project is completed in May 2019.
COURTESY PBOT 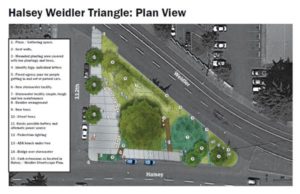 The East Entry Triangle to the Halsey-Weidler couplet is also set for a makeover as part of the Halsey-Weidler Streetscape Project. The triangle breaks and separates Halsey and Weidler streets at Northeast 112th Avenue. Today, this traffic island is occupied by little more than a distinctive, towering Douglas fir and the occasional homeless camper.
COURTESY PBOT

For all its good intentions, the Halsey-Weidler Streetscape Project has seen its share of controversy. As part of the plan, protected bike lanes will be constructed between Northeast 102nd to Northeast 114th avenues along Halsey. These bike lanes push current street parking out from beyond the curb: cars will serve as a barrier between prospective bike lanes and updated sidewalks. Not everybody is on board.

Gateway neighbors say that Portland refuses to see east Portland at face value, as its own entity and with its own interests. Cars, some say, are at the top of that list. “I’ll bet you if these city officials go around, business by business, in the Gateway area, they’re going to find a lot of pushback from the business owners with converting our area into Alberta,” says local business owner Ted Vogelpohl, who attended the Aug. 9 meeting and lives off Northeast 109th Avenue and Weidler Street. “And if they take away our parking and move parking next to the street, people aren’t going to want to park in the Halsey-Weidler couplet. That’s going to hurt the businesses.”

Another component of the Halsey-Weidler Streetscape Project involves the project’s plans for the “East Entry Triangle.” The East Entry Triangle breaks and separates Halsey and Weidler streets at Northeast 112th Avenue. Today, this traffic island is occupied by little more than a distinctive, towering Douglas fir. Gateway business leaders consider the East Entry Triangle to be the official eastern entrance into the Gateway business district. “It will serve as branding as you come into the district from the east,” says Mahon. “It exists today, but it’s just landscaped. [In the future], it’s going to have a large stored water facility, and the community applied for a grant for this through the Bureau of Environmental Services (BES) Stormwater Program. [The triangle] will have a large bioswale with a walking path to look at the facility. We’re keeping the beautiful existing Doug fir and planting additional trees. There will be a solar installation there to help power the rapid flashing beacons [we’re putting in].”

Tom Badrick, from the Parkrose Heights Association of Neighbors, was behind writing the BES grant for the East Entry Triangle. Admittedly, Badrick is no stranger to fashioning traffic islands. He’s also behind the redesign of the “Windscape,” the traffic rounder at Northeast 102nd Avenue and Weidler Street. Windscape is seen as the de facto western entrance to the Gateway business district, and it’s taking its own steps toward building upon its rundown aesthetic later this year (“Traffic rounder redesign committee approves final site recommendations,” MCM Aug. 2018). 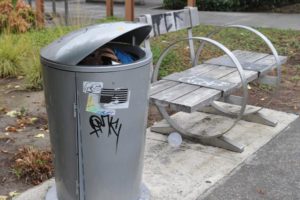 A Prosper Portland community livability grant is paying for three benches like these in the east triangle at Northeast 112th Avenue and Halsey Street. They’ll match other distinctive benches and trash cans placed in the business district, like these in front of Riverview Bank on Halsey Street, at the new park and other sites in the Gateway urban renewal area.
COURTESY PBOT

All in all, it took five grants to give the East Entry Triangle a fresh look. “The first grant was for state-of-the-art benches, the second is from BES for doing a bioswale, the third was for Nevue Ngan [who are also behind the drawings for Windscape] to come and do a design for it, the fourth was a grant to do a kiosk on the island and the fifth is an internal city grant that PBOT applied for to do a trial for a solar installation on the site that will help power new flashing beacons,” says Badrick.

Mahon gave the solar panel special attention during her presentation. “It will help power the signalized pedestrian crossings on Northeast 112th at Halsey and Weidler. This is being funded through the City’s Innovation Grant Program, and PBOT is the grant recipient. The grant is $60,000 for design, construction, maintenance and monitoring/reporting.”

Mahon does not know when the East Island Triangle portion of the Halsey-Weidler Streetscape Project will commence. “The contractor will determine the sequencing of the work, and this information will be provided as part of the schedule submittal to the city.”

Questions, comments? Call Mahon at 503-823-0396 or email her at elizabeth.mahon@portlandoregon.gov.