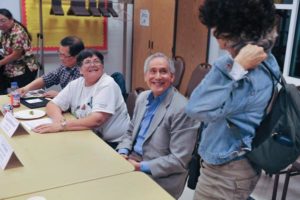 Prosper Portland is promising developer Ted Gilbert, center, more than $13 million to help leverage more than $300 million to develop the 10.5-acre parcel at Northeast 102nd Avenue and Pacific Street in Gateway, which includes the former Gateway Elks Lodge and a lot that’s been vacant for nearly 20 years.
STAFF/2011

If you ask developer Ted Gilbert about the future of Gateway, he’ll remind you that the east Portland transportation hub was given its name with reason. Preceding the construction of the I-84, the region was brainstormed to evolve into Portland’s “front door” to the west and “gateway” to the east. And if Gilbert has anything to say about it––which he does––it’s not too late.

“Growing up, the Willamette river was like a moat,” says Gilbert. “You’re an east-sider or a west-sider, and the river was a wall between the two. Now people see the I-205 like that. We are much more interconnected. Northeast 82nd was the end of the city. But look at [the neighborhood of] Montavilla. It’s trendy, and it’s revitalizing. What’s next? Gateway. Our time has come.”

According to Gilbert, the ingredients are available for Gateway’s golden age, and now there’s a recipe that has garnered the city’s blessing. He co-owns the 5.1-acre parcel of land at Northeast 102nd Avenue and Pacific that’s been a vacant lot for nearly twenty years—locals describe it as “that hole in the ground next to Freddy’s”—with Generations, a corporation that builds quality assisted living communities. Combined with the 5.44-acre former Gateway Elks Lodge lot owned by the David Douglas School District, will merge to create what the developer describes as “a mixed-use, mixed-income, transit-oriented intergenerational community that would include childcare; early childhood education, including an elementary school, a community college and a four-year university; a senior recreational space; and a senior housing community that ranges from mostly independent seniors through assisted living and memory care.”

The prodigious venture is dubbed the “102nd and Pacific/Generations Gateway Project.” New on-site facilities will begin at five to seven stories high and would be anchored by an array of entities: Generations, an assisted living community, which is looking for a second facility outside of the established CherryWood Village; the David Douglas School District, which would generate a new K-5 school; and a collaboration between Mt. Hood Community College and Warner Pacific University. Warner Pacific is interested in developing a college of nursing in addition to year-round adult education programs. Plans also call for “infrastructure costs––roads, sidewalks, utilities and structured parking,” adds Gilbert.

In short, the whole area will be reborn. Or rather, it will come alive. But the name of the game here is to zero in on one of Gateway’s leading industries––and we’re not talking about transportation.

“The area is healthcare-rich in direct proximity to this project and Gateway,” says Gilbert. “You have the Oregon, Providence and Kaiser clinics and nearly 3,000 jobs. These are mostly held by baby boomers. This is an extraordinary opportunity to connect young people and adults with these kinds of jobs.”

What is 2+2+2?
The project calls for a focus on workforce development and education. The blueprint is influenced, in part, by the 2+2+2 model. Under the 2+2+2 framework, there is partnership between a traditional high school, a community college and a four-year university whereby students spend two years in each program. The credits transfer seamlessly and promote “career paths centered around certain key fields, such as healthcare,” according to Gilbert. “When I learned about [the 2+2+2] model, it seemed especially effective,” states Gilbert.

“When we have an abundance of healthcare in this area, we have all the specialties. We can take advantage of all that infrastructure with summer jobs, shadowing, direct hiring and adjunct professors. All of this is available right on our doorstep,” says Gilbert.

The 2+2+2 plan would not only benefit teenagers. Gilbert believes baby boomers will benefit from an innovative retirement community under the 2+2+2 model. “[Generations] needs to create a new idea for baby boomers that has more energy and sense of purpose. Their idea is creating this intergenerational community where seniors get to be surrogate grandparents to younger people while younger people get to engage with the seniors. We have healthcare, adult education and 2+2+2. They’re on board and already spending money. The YMCA would love to build a state-of-the-art facility there and take pressure off East Portland Community Center, which is packed.” 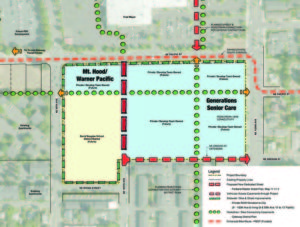 The 102nd and Pacific/Generations Gateway Project is set for the 5.1-acre vacant lot at Northeast 102nd Avenue and Pacific Street and the 5.44-acre site of the former Gateway Elks Lodge. The visual is a concept plan shared for showing the project location, the full 10.5 acres site and the combination ownership private and the school district. It is not the final lot lines or uses.
COURTESY PROSPER PORTLAND

No time frame for new elementary school
For the moment, Gilbert’s plans for the site’s older generations might be more in reach. David Douglas District Communications Manager Dan McCue notes that a new elementary school is not in the school district’s immediate sights, while it is in its eventual interest. “While we continue to hold that property for a future elementary school, we have no immediate plans, no design plans for a building, no time frame and no funds to build it. Eventually, we hope to locate an elementary school on that site, but when that happens will depend on enrollment growth over the years and whether and when we are able to pass a future bond measure,” says McCue. “Safe to say that is at least a couple years out. We have had talks with surrounding property owners around coordination of development of that whole Gateway area, so that the eventual placement of an elementary school will be a great fit with surrounding development.”

Having spent 15 years on the Opportunity Gateway Program Advisory Committee, Gilbert has long been committed to local economics. In 1998, he participated in the founding of the organization Opportunity Gateway. “When we started Opportunity Gateway, east Portland felt like if something quality was anywhere in the city, it happened downtown or close in, but not here. The citizens wanted to change that.”

Millions more in urban renewal money yet to be invested
By June 2001, the Gateway Regional Center Urban Renewal Plan was approved by Portland’s City Council after being drafted by the Gateway business community with input from the Portland Development Commission, known today as Prosper Portland. According to Prosper Portland’s website, the 2001 plan “established the Regional Center as a tax increment district capable of financing up to $164 million for public improvements over 20 years.”

But time is running out. By 2022, Gateway will no longer be an official “urban renewal district” under the 2001 Plan. Its status will need to be renewed.

Under its urban renewal district designation, Gateway has up to $20 million devoted to the Halsey/Weidler Business District, $8 million toward the Gateway Transit Center and $2 million allotted toward the Central Gateway neighborhood. In the 2017–2018 fiscal year, this money has been allotted to projects such as Gateway Discovery Park, the Halsey-Weidler Streetscape Project and a mixed-use development adjacent to the new park.

The lot at Northeast 102nd and Pacific, however, is not owned by the city. While the property falls within the urban renewal zone, any city money would come in the form of investment in private development. City investment is more likely while Gateway retains its urban renewal zone title. In total, Gilbert believes $310 million is the current “guesstimate” for what it will take to get the job done.

Prosper Portland is considering investing up to $13 million for the site’s private developers to map solutions. This $13 million is expected to have a return on investment. “We want to stress that public funds are going to leverage a lot of private investment; it’s a different process than properties that Prosper Portland owns,” says Susan Kuhn, Prosper Portland’s relationship manager in the Gateway Regional Center Urban Renewal Area.

Prosper Portland’s interests in the site appear concrete. “What we’re focusing on is quality development that’s going to help create and build out Gateway as an economic regional center. For Prosper Portland, we’re looking at the workforce training and small business development opportunities. We’re in the community engagement stage right now, listening to the community’s priorities for public investment in this project. The concept that’s been proposed is an institutional building for Mt. Hood and Warner. On the ground floor, there would be retail space for those who have not specifically benefitted from economic growth in the past.”

In line with a 2018 Niche.com ranking of the most diverse places to live in the Portland area, 10 of the city’s top 12 most diverse neighborhoods are in east Portland. The other two neighborhoods are Portsmouth in north Portland and Wood Village, a Portland suburban city in east Multnomah County. Prosper Portland hopes to prioritize minority, women and immigrant-owned businesses for ground-floor retail.

To attract community input, Prosper Portland has launched a series of focus groups, in addition to a survey. Kuhn says, “We’re doing a series of small focus groups, or small group meetings. The focus groups will culminate in a community meeting to hear about the public benefit priorities and next steps on the evening of July 17 at the Immigrant and Refugee Community Organization on Northeast Glisan.”

In terms of identifying immigrant or minority business owners, Anne Mangan, Prosper Portland’s senior communications coordinator, says the agency has multiple pathways of determining these businesses. “We will put out a call to market the space particularly to those audiences.”

Gateway urban renewal area expires in 2022
Gilbert believes his proposition is doable before 2022, but he admits that he and his partners can’t do it alone. “My biggest contributions would be living in this place, getting this land and hanging in there for years without grabbing for lower-hanging fruit. We’re going to have to attract an enormous amount of private capital. The size of the project is such that it will be financed privately. East Portland deserves quality designs, quality development––and it’s going to cost the same to build that quality in Gateway as it would in northwest Portland.”

“Can we execute it? Honestly, I don’t know,” says Gilbert. “The desires, the players and the will to identify the resources are there. We have people around the table now that want to do it; they know what they want to do and how to do it. David Douglas will decide when it’s appropriate to build a new school, but it’s more cost-effective to do the rest at one time.”

Gilbert is hoping the ships will set sail before 2022. “What everybody is looking for is the synergy of everything being next to each other. That would make this a vital place. We want to create a really exciting brand for Gateway for the folks that are there and for those from the rest of the region. We want it to be more than a drive-through.”

If you want to get your hands on a Prosper Portland survey to respond before July 6 or learn more about the project, contact Prosper Portland Project Manager Susan Kuhn at 503-823-3406 or kuhns@prosperportland.us.