2018 will see the introduction of numerous city and Portland Bureau of Transportation (PBOT) efforts designed to improve safety for bikes, cars and pedestrians east of 82nd Avenue. Many of these improvements are part of the Fixing Our Streets (FOS) initiative, of which, the first two FOS east Portland-associated projects have officially broken ground as of late May. 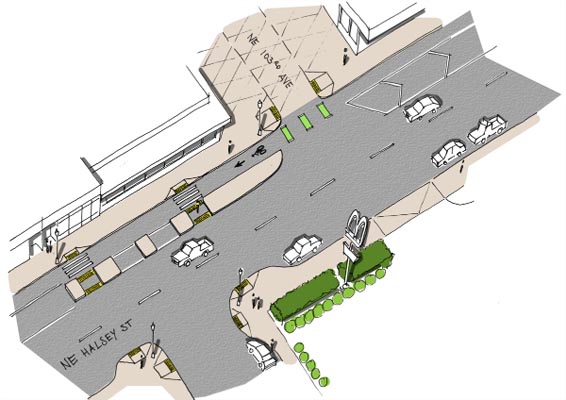 As previously reported (“Portland gas tax pays for N.E. Halsey Street repaving,” MCM January 2018), the FOS initiative is a direct result of the successful two-year-old ballot measure, Measure 26-173, which was passed by voters in May 2016. Measure 26-173 called for the creation of a gas tax at 10-cents-per-gallon at local pumps, which PBOT started collecting January 2017. The money is then recycled and redirected toward funding FOS projects. In short, drivers are paying for roads.

Overall, there are 19 FOS-related projects scheduled to begin this spring and summer throughout Portland, with some projects taking place around east Portland.

The first project is a $2,240,000 initiative to add a three-inch grind, overlay paving and Americans with Disabilities Act (ADA) ramps along Northeast Halsey Street, including the Halsey-Weidler couplet from 102nd to 114th avenues. Work is expected to begin this summer. Additionally, a case of sidewalk construction has yet to receive a firm date for the construction phase but is expected by this summer. This project will see sidewalks built up on Northeast 102nd Avenue from Sandy Boulevard to I-84.

Outer Halsey is a prime candidate for roadwork: it possesses two high-crash intersections, which has designated it as a priority area for PBOT. But the beginning of FOS work along Halsey also marks the beginning of PBOT’s other Halsey-related project, and this one has proven controversial with some locals.

The $2,240,000 paving job along Halsey will be accompanied by an additional PBOT project, the Halsey-Weidler Streetscape Project. This project is being partially funded by Prosper Portland and carries a price tag of $3 million. Both the FOS Halsey road improvements and the Streetscape Project will undergo construction side-by-side.

Business owners suggest that the Streetscape Project’s desire to add protected bike lanes––fitted between sidewalks and street parking from 102nd to 114th avenues (e.g. along the Halsey-Weidler couplet)––might make the street less desirable for shoppers with cars. Select business owners have commented that PBOT is looking out for bikes, instead of cars, which there are fewer of in east Portland than there are closer to downtown.

For his part, Dylan Rivera, PBOT’s public information officer, assures the public that this divisive component of the Halsey-Weidler Streetscape Project is meant to benefit everyone. However, Rivera does admit that PBOT hopes for increased biking along Halsey given the safety improvements. “The first thing I’d say is right now [is that] when people open their car doors, they already need to be mindful of people biking,” says Rivera, defending PBOT’s plans. “This project will result in slower automobile traffic, making the street more welcoming for everyone. This will make people parking vehicles on the street more comfortable. As always, they need to check their mirrors and be careful with their car doors so they’re not hitting anyone in a travel lane.”

Both projects along Halsey Street are on track to enter post-construction during the first half of 2019.

“We’re really dependent on folks getting to work on public transport and through biking and walking, because that’s how we can move a lot of people without making traffic so much worse,” says Rivera, speaking on behalf of several east Portland roadwork initiatives launching this spring and summer. “If everybody is driving alone in a single-occupant vehicle, there will be more traffic. This is how we can accommodate more people and get people to experience healthier lifestyles.”

To learn more about any or all FOS projects, check out PBOT’s official FOS webpage at portlandoregon.gov/transportation/64188. If you have questions or comments about FOS, e-mail concerns to fixingourstreets@portlandoregon.gov.