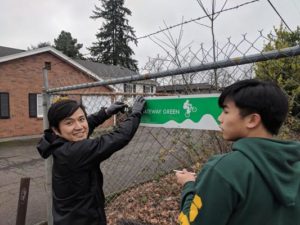 Last month, Propel Studio’s Tuan Vu and Minh Nguyen placed directional signs around Gateway for Gateway Green, the new mountain bike park adjacent to the I-205 Freeway. The signs were paid for by a $5,000 grant from PeopleForBikes.
COURTESY PROPEL STUDIO

If you’re lost trying to find Gateway Green, the new mountain bike park next to the I-205 Freeway, or the I-205 Multi-Use Path, you’ve just received a little help from Friends of Gateway Green.

Linda Robinson, co-chair of Gateway Green, shared her experience of disseminating the signs around Gateway in an e-mail. “We had a total of eight volunteers putting up signs on Monday afternoon. The signs are pointing toward the Multi-Use Path and the Transit Center––but they have the GG logo and the words “Gateway Green” on them. We put up about half of the signs and we hope to put up the rest of the signs along the I-205 MUP, but we haven’t secured official permission yet.” 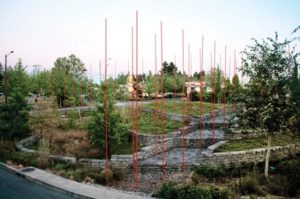 The roundabout or jughandle at Northeast 102nd Avenue and Weidler Street is set for another makeover. The first, in 2008, was named a “living sculpture” called Windscape and cost $100,000. Windscape lasted until 2014 when homeless vandals snapped off many of the red poles for lean-tos. Designs for “remodeling” the roundabout will be on display Thursday, Jan. 4 at the Kaiser Gateway Clinic located at 1700 N.E. 102nd Ave. from 3 to 7 p.m.
COURTESY CITY OF PORTLAND

In other Gateway news, there will be several concept designs for altering the façade of the jug handle, or roundabout, at Northeast Weidler Street and 102nd Avenue formerly known as Windscape. Before Windscape, the space was flat and grassy with a couple of fruit trees. The north side has a swale funded by the Bureau of Environmental Services along with some landscaping.

The Northeast Halsey Street between 102nd Avenue and Weidler Street intersection are already set for a three-inch grind and overlaying paving, as well as Americans with Disabilities Act-compliant ramps, as part of a Fixing Our Streets paving project in 2018 (see related story here). That project is currently in the design phase and is expected to be completed in the second half of 2018.

Several concept designs for “remodeling” the roundabout will be on display Thursday, Jan. 4, at the Kaiser Gateway Clinic located at 1700 N.E. 102nd Ave., from 3 to 7 p.m. “After the open house, we will review community feedback and modify the design to reflect what you have shared with us,” said Tom Badrick, longtime chair of the Parkrose Heights Association of Neighbors. Representatives from Nevue Ngan Associates—the landscape designer—and community leaders will be on hand to listen to and collect feedback. “The goal is to engage the community [and] redesign, or not, if everyone likes it. Options so far from the public include installing an arch, taking it back down to flat, adding an international herb garden or [adding] a sculpture garden,” said Badrick.

Badrick also notes that there will be a renaming contest for the roundabout owned by the Portland Bureau of Transportation (PBOT).

If you are interested in tossing your suggestion into the ring, Badrick suggests making an appearance at the meeting and keeping up with future notices (which you will likely receive from the Mid-county Memo).

Nevue Ngan, for what it’s worth, was hired by PBOT to lead the design team developing the Southeast Division streetscape master plan in 2014. That project led to a redesign of Southeast Division’s street based on community-identified goals. A lot of decorative rocks armed with miniature people, as well as colorful islands of assorted trees and plantings ensued, among other additions meant to boost the street’s identity with pedestrian, car, transit and biker safety—as well as stormwater runoff—in mind.

Read more about Friends of Gateway Green at gatewaygreenpdx.org.

A short history of Windscape, the roundabout at 102nd Avenue and Weidler Street:

Windscape was built in 2008 with federal matching funds (“Living sculpture adorns improvement project” MCM November 2008), and designed by Portland Parks & Recreation Director Mike Abbate—who was, in 2008, a landscape architect working at a private firm—Prosper Portland (then PDC) paid about $100,000 for the landscape sculpture of custom masonry and red, wind-vibrating poles, which were removed in 2014 due to vandals (“Vandalism blows Windscape away” MCM November 2014).