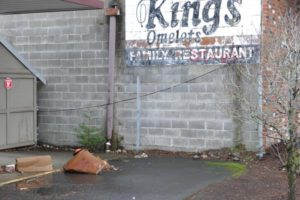 Before and after images of what the wall between the Outer Rim Bicycle Shop and Kings Omelet looks like now and what it will look like after the installation of the “Outer Rim Green Wall.”
STAFF/2018

Outer Rim Bicycles, 10625 N.E. Halsey St., will fix up your BMX bike, mountain bike or road bike anytime, but this month, it takes on a new renovation: the patio in front of its shop.

In late 2016, a Gateway One EcoDistrict grant set the stage for East Portland Neighbors to fund the “Outer Rim Green Wall” on Outer Rim’s patio for $26,000. The grant was written by Tom Badrick of the Parkrose Heights Association of Neighbors. A public event commemorating the opening of the Outer Rim Green Wall has been given the greenlight for Feb. 15 from 4 to 6 p.m., but the wall won’t be finished upon its reveal. The community is invited to assist Outer Rim in planting the wall, a surprising green space that doubles as a performing stage with a cutting-edge design that includes unique, modernist seating spaces. 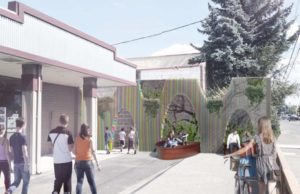 Before and after images of what the wall between the Outer Rim Bicycle Shop and Kings Omelet looks like now and what it will look like after the installation of the “Outer Rim Green Wall.”
COURTESY PROPEL STUDIO

The project was Badrick’s brainchild from its inception. “Most of my past 15 years have been as a sustainability professional, so green walls and roofs are of interest to me. It came about in part [when I was] sitting at one of the beer events at Outer Rim thinking about what to do with an unattractive space.”

Inspiration for the wall comes from both Gateway’s role as a transportation hub, as well as its standout demographics. Steel panels at the site allude to transportation-oriented surroundings, since Gateway, after all, is known as a transportation crossroads. Multicolored fins along the wall comment on Gateway’s ethnic diversity. Overall, the project seeks to stand out à la the Gateway arch, a community emblem built by Fred Meyer himself.

To learn more about Outer Rim, visit outerrimbicycles.com or call them at for more information about this upcoming event at 503-278-3235.