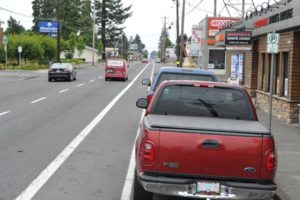 Northeast Halsey Street, from 102nd to 112th avenues, is receiving a makeover this year with repaving, better lighting, crosswalk improvements and a protected bicycle lane this year. The work is expected to take six to nine months. A portion of the funds for the work comes from the additional gas tax revenue that started being collected Jan. 1, 2017.
STAFF/2017

Since January 2017, you’ve been paying more for your gas within Portland’s city limits. The good news: your money is ending up back in your hands—or rather, your streets.

In May 2016, Portland voters had their say over Measure 26-173, which added a 10-cent-per-gallon gas tax every time you take to the pump, which the city via the Portland Bureau of Transportation (PBOT) has been collecting since Jan. 1, 2017. Its initial goal was to raise an estimated $64 million over four years, and so far, it’s been exceeding expectations.

Ironically, transplants may be the ones deserving the slow clap here. “It’s raised about $15.6 million, and that’s ahead of our projection, which was about $15 million by now,” says Dylan Rivera, PBOT’s Public Information Officer. “We’re pleased with that. A lot of it is the result of factors outside of our control; the economy is booming when we’ve got something like 80 to 100 people moving to the Portland area every day.”

According to Rivera, the gas tax is built into the price you pay at the pump. Another action item—the heavy vehicle use tax—is Measure 26-173’s sister tax. The Portland City Council also passed the heavy vehicle use tax in May 2016, which “charges companies based on a percentage of the state weight-mile tax they pay,” according to the tax’s PBOT webpage. Only companies who pay the state weight-mile tax and have a license to perform business in Portland are taxed. They then pay 2.8 percent of their Oregon Weight-Mile Tax.

Whereas the gas tax is collected on an ongoing basis—you probably visit the Shell a couple times a month—the heavy vehicle use tax is collected on an annual basis. Rivera compares it to an income tax you pay once a year, as opposed to the gas tax, which functions like a gas-specific sales tax. As of Oct. 31, PBOT had collected $187,000 in heavy vehicle use taxes. “The gas tax is collected by fuel dealers based on their sales to gas stations, and ODOT [Oregon Department of Transportation] collects it for us and transfers the money to the city,” says Rivera. “This is the most efficient way to do it because ODOT collects state gas taxes, as well.”

But you probably don’t own a heavy vehicle, so let’s get back to the gas tax.

Where is your money being recycled? The answer: PBOT’s Fixing Our Streets (FOS) program. FOS invests the green in new blacktop across the city, but one paving project will take place along Northeast Halsey in the Halsey/Weidler couplet from Northeast 102nd to 112th avenues. The project has a budget of $2,240,000, which will commission a three-inch grind and overlay paving along the intersection of 102nd Avenue and Weidler. You can also expect upgraded Americans with Disability Act-compliant ramps for all curbs within the given paving area.

Northeast Halsey Street—at 6.5 miles long—will be a busy bee next year. It’s owned by PBOT, which on its website lists Halsey as possessing two high-crash intersections. This FOS assignment will join forces with the Northeast Halsey Streetscape Project in helping improve the road’s lethality. “The Halsey Streetscape Project will improve the sidewalks, lighting, pedestrian crossings and bike access on Northeast Halsey and Weidler between Northeast 102 and Northeast 112th Avenue. That $3 million project has been planned for a number of years now,” adds Rivera. “The Fixing Our Streets Program gaining voter approval last year gave us the opportunity to add pavement maintenance to the project. So the Fixing Our Streets paving will be built by the same contractor at the same time as the streetscape project.”

In an e-mail, Rivera notes that the repaving will only occur on Halsey Street, not Weidler Street.

Asked in mid-December about the timeline of the Halsey projects, Rivera commented, “We have finalized the plans for bidding out the work. We believe we should be ready to get City Council approval this month, hopefully by the end of December for our bid plans. Then we’ll be able to have the project out to bid to the contracting community by this spring.”

The FOS maintenance work is set to begin this summer and will take six to nine months to complete; finishing touches are planned for Winter 2019. Expect a similar timeline for the concurrent Streetscape Project on Halsey and Weidler.

As for the future of the gas tax itself, it’s likely to resurface as another ballot initiative seeking voter reappraisal in 2020. If voters vote it down then, it expires.

To find out more about PBOT’s FOS program and the Northeast Halsey: 102nd to Weidler Project, go to fixingourstreets.com or contact Dylan Rivera at 503-823-3723.  n