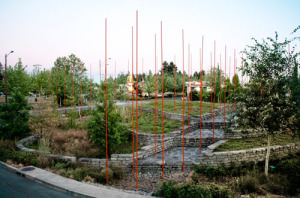 Windscape, the “artistic landscape” sculpture with its attention-attracting poles was built in the stormwater retention facility, or jug handle at Northeast 102nd Avenue and Weidler Street among native plants and trees in 2008. The entire project cost $100,000.
COURTESY GREENWORKS

We got a call last month from reader John Chinakos. He wanted to know what happened to the array of red poles in the jug handle at Northeast 102nd Avenue and Weidler Street that city workers removed recently. Chinakos’ call was not unique. Despite a half-dozen Lee Perlman reports of its evolution beginning in 2005, and a front-page feature when it was being constructed (“Living sculpture adorns improvement project” MCM November 2008), we get at least a call or email every other month asking, ‘What is it?’

Dubbed Windscape, it was designed by Portland Parks & Recreation Director Mike Abbaté when he was a principal at the landscape architectural firm GreenWorks, who was under contract with the Portland Development Commission to build it as part of the 102nd Avenue Improvement Project.

With federal matching funds, the Portland Development Commission paid about $100,000 for the project, with $10,000 for the plastic poles, according to the city’s capital program manager Dan Layden.

He said the city considers half the area a stormwater retention facility and the other half Windscape area. “[In 2008] there was an interest on the part of the community and others to try and do something different and unique there,” Layden said in a telephone interview. “It was never intended as art; it was more intended, for lack of a better term, as ‘artistic landscaping.’” 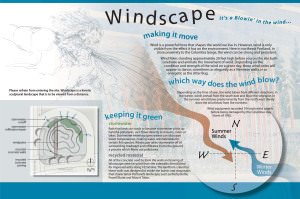 The intersecting array of 51 red poles, each 20 feet tall, that symbolize the E. Burnside Street (Portland’s baseline street), and 102nd Avenue junction, are set among native plants in recycled concrete from the 102nd Avenue Improvement Project. The walls are designed to evoke Portland’s buttes and mountains: Rocky, Powell and Clatsop buttes and Mt Tabor and Mt Scott.

The poles vibrate in the wind; however, other than in a video on GreenWorks’ website, none of the people we talked to over the years ever saw them move. “We didn’t quite get it right,” Layden said. “They didn’t move as much as we were hoping they would move; they still moved, but it took a really strong wind.”

Despite being designed to withstand 102 mph winds, and set in concrete with tamper-resistant bolts, Windscape couldn’t survive the windstorm of vandalism this summer when the jug handle became an impromptu campground for homeless as transients broke poles off to use them for lean-tos. When the city got wind of what was happening, workers removed all 51 poles and cut the screening foliage back to discourage camping. “They’re in safekeeping. We’d like to put them back in,” Layden said. However, due to maintenance budget cuts for projects like these, unless they get some local help, Windscape may be a thing of the past. “We’d like to put it (Windscape), back to where it was, but that is going to require an agreement with either businesses or some association in the area [to maintain them],” Layden said. “We’d like to figure out a way to work with somebody to be able to maintain it, but we haven’t solved that problem yet.” 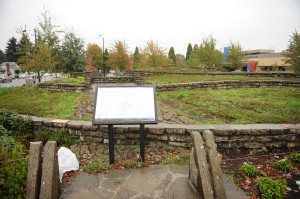 This is how the stormwater retention facility looks today with shorn foliage and without Windscape. All that is left today of Windscape are the concrete pads they were placed in; however, the poles are in safekeeping, awaiting a neighborhood or business association’s participation with the city in a maintenance plan for the facility.
Memo photo/Tim Curran

What do readers think? Should Windscape return? Let us know, and, as Mr. Chinakos did, if you have questions about your neighborhood or what’s going on it, give us a call at 503-287-8904 or email editor@midcountymemo.com, and we’ll attempt to find out for you.