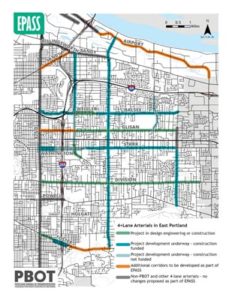 What happens to traffic patterns when changes are made to multiple streets in the same area?
Is PBOT sure it’s using the most effective tools to reduce crashes while making sure people can get to their jobs, schools and other destinations on time, whether by walking, biking, taking transit or driving? East Portland Arterial Streets Strategy, or EPASS, seeks to answer these questions.
COURTESY PORTLAND BUREAU OF TRANSPORTATION

As of late, the Portland Bureau of Transportation has had its hands in many cookie jars throughout east Portland, and officials are taking community complaints over PBOT solutions to heart. Residents have issues with many PBOT solutions, such as lane reductions. In another instance, the addition of protected bike lanes has made some in the Gateway business district roll their eyes.

The Portland Bureau of Transportation has sketched a pathway that will give east Portland residents increased insight on how PBOT might redesign arterials (city streets with four or more lanes) east of 82nd Avenue, starting with the 15 they’re already working on. The name of the game is EPASS, or the East Portland Arterial Streets Strategy. “We want to make sure that while we are implementing these projects [we are also meeting] our safety goals, and we’re also looking at mobility concerns, potential trafficking impacts and diversions onto other streets,” says project manager Steve Szigethy. “We want to make sure these streets will work as a system.”

As reported last month (“122nd Avenue Improvements highlight safety concerns,” MCM Dec. 2018), a November open house for the 122nd Avenue Plan was packed with more than 90 visitors. The open house unleashed results from a summer survey seeking input on priorities for street improvements along 122nd Avenue. The three most cited items were traffic impacts, safety and pedestrian access and comfort, in that order.

EPASS will give the public a chance to get more specific with what these terms mean. With the 122nd Avenue Plan, for example, there have been complaints about lane reductions. And with the Halsey-Weidler Streetscape Project, currently under construction, there were issues raised with reducing parking spots in favor of bike lanes (“Halsey-Weidler Streetscape Project starts in September,” MCM June 2018).

Szigethy promises that reducing traffic lanes will not be the go-to method in every instance. “The Outer Division Safety Project is a good example of a street we knew had a lot of safety issues, but we looked at some lane reconfigurations and realized they just weren’t going to work with so much traffic on the street. Reducing lanes wasn’t a viable option. With Outer Division, we’re looking at center median islands and access management, which is restricting the number of turns into driveways and local streets. Those types of tools can be great safety interventions without reducing the number of lanes.”

With EPASS, it’s every street for itself. “One of the biggest benefits of EPASS is that the project acknowledges every street is different and is used differently,” explains Hannah Schafer, PBOT’s communications specialist. “We’re taking that step back and looking at how people may travel differently on Halsey than, say, Glisan—and where we can apply changes to keep people moving.”

According to PBOT, the way it works is simple. PBOT will put on a series of four focus group meetings allowing a variety of east Portland residents to communicate how they use select roads and what challenges they see based on the arterials’ current status, as well as suggest and discuss proposed redesigns. Szigethy says the key to EPASS is that it utilizes a “public involvement approach,” which allows the community to help edit current solutions and dream up new ones.

Full employment plan
Altogether, EPASS possesses a budget of $265,000, which allows PBOT to partner with the consulting and engineering firm HDR as well as a series of subconsultants, according to Szigethy. Subconsultants are teams concerned with communications, graphics and public involvement, among other items. 23 percent of the subconsultants will be minority- and women-owned businesses. An additional $100,000 will be set aside for PBOT staff. “We’re doing an initial push of sharing information about this. We really just signed our contract with HDR earlier this month [in December],” says Szigethy. “The next few months will be a lot of deskwork and setting up these traffic models and figuring out our exact approach with these focus groups. You’ll see a lot of internal work the next two months, and in March will be when we go out and share some initial traffic modeling information. Stay tuned for the spring; that’s when [EPASS] will blossom with focus groups and public processes.”

In the meantime, EPASS will continue to surface at open houses for other projects, and a public survey is in the works. PBOT plans to wrap up EPASS with an “official document” that will help a flurry of projects move forward by September. “We still have a lot of people pointing out the continued safety concerns out there, and we realize we have a lot of work we’re doing in east Portland. It’s hard to keep track,” says Szigethy. “So, this is a good way of bundling all of the work we’re doing together and sharing it in a one-stop shop.”

Learn more about EPASS and sign up for its official newsletter here: portlandoregon.gov/transportation/78008.