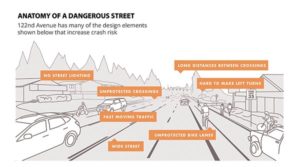 The Portland Bureau of Transportation is developing a plan for 122nd Avenue improvements to be built in 2020. Potential changes include safety improvements, more crossings, improved bike and bus lanes and signal changes to support frequent bus service along this increasingly busy traffic corridor.
COURTESY PBOT

122nd Avenue is among the most dangerous streets in the city. It includes four of the city’s 30 highest crash intersections. Since 2010, there have been more than 400 people injured on 122nd Avenue, including 127 people walking and biking. Nine people have died in the last eight years.

Tragic irony was on full display at a Portland Bureau of Transportation (PBOT) open house for the 122nd Avenue Plan at the Midland Library on Nov. 7.

On Oct. 2, a father and son were struck by a van right outside the Midland Library while attempting to cross the street. The 122nd Avenue Plan is PBOT’s initiative to lower traffic fatalities along the 6.5-mile expanse of 122nd Avenue (on which the library sits) from Marine Drive to Foster Road. The father and son survived the collision, but the accident sent shockwaves through the spines of the city’s transportation planners.

“To have that happen anytime is difficult, but to have it happen right in the middle of your project brings more attention to the problem,” says April Bertelsen, the 122nd Avenue Plan’s project manager.

Given its current disposition, pedestrian crashes are 50 percent more common on 122nd Avenue than other streets in Portland. With its many driveways that invite angled turns, 122nd Avenue showcases an unflattering amount of turning crashes: these are also 50 percent higher than the city-wide average.

According to PBOT, the 122nd Avenue Plan currently flaunts a pot of about $3.3 million, which PBOT can spend on street improvements by 2020. As previously reported (“122nd Avenue next street in line for PBOT transformation,” MCM Sept. 2018), funding for the project stems in large part from the Fixing Our Streets initiative. The Fixing Our Streets initiative saw local voters decide to implement a 10-cent-per-gallon gas tax in 2016. Proceeds are then transformed into road improvements.

The people have spoken
Project recommendations were due this fall, but they’re now expected next spring. In the meantime, PBOT has vetted locals for input through multiple platforms. Last summer, a public survey was released asking Portlanders for direction. The survey received 1,051 replies, with two-thirds of respondents being east Portland locals. And at the Midland Library open house last month, more than ninety people showed up. “The open house included a dot exercise where people could put a dot [sticker] on a board next to their top improvements for 122nd [Avenue],” says Dylan Rivera, PBOT’s public information officer.

PBOT officials admit the project has gained a lot of traction, but they were taken aback with the amount of interest expressed over one request. Lots of people want increased enforcement of traffic violations. “We have safety cameras on 122nd [Avenue] enforcing speed, but they’re pretty far south by the Springwater Corridor crossing 122nd [Avenue] in the Holgate/Foster area,” says Rivera. “So it’s interesting to see folks asking for more enforcement.”

The suggestion that the public strongly favors making traffic violations more expensive was not anticipated. Bertelsen calls this revelation an “a-ha moment.”

While varied, PBOT claims public feedback from both the survey and the open house hint at some common themes. “Some of the most popular responses were for more street lighting, meaning white lights that add visibility to the street,” says Rivera. “Another top response was for enhanced and marked pedestrian crosswalks and bike crossings and rapid-flashing beacons. Two other top responses were protected and enhanced bike lanes and managing of speeding and red light running.”

Graphics displayed at the November open house depict survey results from this summer as being mostly in favor of “traffic impacts,” followed by safety; pedestrian access and comfort; transit performance; and placemaking, livability and healthy neighborhoods. 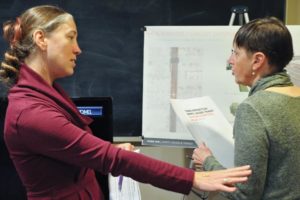 “Any improvements they make to reduce the number of crashes will be important benefits to the community,” says Linda Robinson, who attended the open house. “When I try to drive from Northeast 122nd [Avenue] and Halsey [Street] to Southeast 102nd [Avenue] and Stark [Street], it usually takes 15 to 20 minutes most anytime during the day, and sometimes longer. The timing of the traffic signals, or lack of coordinated timing, is one big reason. It’s my understanding that installing smarter, programmable lights should make that drive easier.”

“We’re trying to figure out what to do first,” says Bertelsen. “We were getting a really broad spectrum of feedback, and we’re taking that into consideration. Where we’re at right now is trying to identify a number of spot improvements we can make along the corridor.”

At the open house, Bertelsen referred to the 122nd Avenue Plan a “multilevel conceptual investment plan.”

What to expect in 2020
Although PBOT is not sure what the focus of the 2020 improvements will be, there are educated guesses. “For that money, it will be a new crossing here and there, as well as some changes to the lanes and lighting,” says Bertelsen.

Priority for transportation improvements will be granted to sections of 122nd Avenue that align with “pedestrian districts and Comprehensive Plan centers,” says Bertelsen. An example of one of these centers along 122nd Avenue is the area surrounding the MAX stations on East Burnside and Southeast Division streets. These locations offer higher citizen densities and “match up with the most comments we’ve received about safety concerns and where the most [dangerous] activity is occurring” on 122nd Avenue, according to Bertelsen.

2035 Comprehensive Plan takes effect
For those unfamiliar, the 2035 Comprehensive Plan was adopted by the Portland City Council two years ago in December 2016 and came into effect this May. It is a long-term plan intended to manage population and employment growth in certain areas of the city. As part of the plan, there will be changes to Portland’s zoning map and zoning code.

Another thing the public can expect by 2020 is for PBOT to continue working closely with TriMet. “The 122nd Avenue Plan is one way we are trying to implement enhanced bus services through street design, because what we’re finding is with population and job growth and traffic on our streets, there’s a negative impact on bus services at a time when we’re trying to encourage usage of buses,” says Rivera. “We’re trying to work with TriMet to find ways we can use the city’s streets and traffic signals to make more reliable and frequent bus services. We’ve done that already on 122nd [Avenue] and on Northeast Prescott Street. Recently, we did several crossing improvements and several sidewalk infill projects that made bus service more accessible.”

Even as different city organizations place 122nd Avenue under the microscope, there will be a continued push for additional public comment. PBOT is releasing a second survey in the weeks following Thanksgiving.

If you’re interested in adding your voice, visit the 122nd Avenue Plan project page at portlandoregon.gov/transportation/76937. You can also contact project manager April Bertelsen at 503-823-6177 or april.bertelsen@portlandoregon.gov.