Home » 2019 » Former Hansen Shelter reopens, but not for the homeless
Tue15

Former Hansen Shelter reopens, but not for the homeless 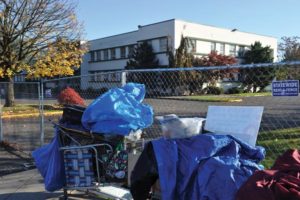 Multnomah County is taking down the fence around the Hansen Shelter property and renaming it the Hansen Building. In addition, 55 to 60 Department of Community Justice employees are temporarily moving onto the site. They’ll work out of a series of 14-by-56-foot mobile trailers on the property while their building down the street is being remodeled. Despite the Hansen Shelter being closed for months, it’s still a Mecca for the homeless.
STAFF/2018

It’s a tale of two east Portland homeless shelters. Or rather, one former shelter and another that has sprouted up just a few blocks away.

Since shuttering last summer, the Hansen Shelter, 12240 N.E. Glisan Street, has quietly returned as the “Hansen Building.” An ailing structure, an immediate use has been found for the site, if not the building itself. The Hansen site will play a key role in the $7.5 million renovation and expansion of Multnomah County’s Department of Community Justice (DCJ) East Campus, 1415 S.E. 122nd Ave., which includes the Wy’east Shelter. Wy’east opened in its south building on June 13.

Wy’east offers a 24-hour shelter along with support services and a health clinic, which is operated by the nonprofit Central City Concern. Wy’east is geared toward men over the age of 55, veterans and those with disabilities. Starting this February, the two shelter buildings will be linked. After years of planning, Multnomah County’s Facilities and Property Management will begin a sparkling renovation and expansion of its East Campus. As part of the plan, 55 to 60 DCJ employees will be housed in a series of 14-by-56-foot mobile trailers outside the Hansen Building amidst East Campus construction. “The renovation and expansion are part of the DCJ’s efforts to provide more robust services and supervision and a greater presence in the community where clients and services exist. The Hansen site is serving as temporary relocation for DCJ staff and clients while the renovation occurs,” says Jessica Morkert-Shibley, a communications coordinator for Multnomah County. “The DCJ East Campus Renovation is a project that’s been in the works for quite some time. We’ve been working with the neighbors and the surrounding community since 2015 and want to make sure everyone is aware of the renovation plans.”

According to its official website, the DCJ “provides supervision and treatment to youth, adults, families and communities to address the underlying issues that drive crime. Our efforts are guided by evidence-based strategies to maximize our resources and results.” Changes to the DCJ’s East Campus are significant in that they provide insight into the future for both the Hansen Building and the Wy’east Shelter.

Good neighbors
When the Wy’east Shelter was first announced, it was met with mixed feelings on full display, echoing outward into local television and The Oregonian, as well as feeding into the fears of local campaigns fueled by homeless-induced crime.

In September, the Mill Park and Hazelwood neighborhood associations made a collective statement by helping fund a creative “Eat and Greet” at Wy’east enabling homeowners to meet their new neighbors. The Eat and Greet was praised by county officials for its sympathy (“Homeless shelter in Mill Park rouses debate,” MCM Oct. 2018). It also occurred as a stark contrast to the Enough Is Enough PDX campaign, which started a Change.org petition that same month asking politicians to pay more attention to east Portland crime. As of late December, the petition is nearing 6,500 signatures. An Instagram account with the handle “montavillainitiative” regularly updates its page with photos of litter and stolen bikes.

To its credit, the Wy’east Shelter has remained quiet since summertime. When asked to describe Wy’east’s influence since opening in June, Morkert-Shibley responded: “Our operator, Transition Projects, reports no significant issues. They’ve worked to manage a responsive and productive relationship with immediate neighbors. In fact, we’ve heard compliments from neighbors about how the shelter is being managed.”

Last summer, the Joint Office of Homelessness joined the County in installing permanent, privacy-screened fencing around the East Campus. This project was planned before the shelter itself was proposed, and fencing was installed sooner than anticipated.

Renovations are set to take 12 to 18 months. In that time, only the shelter inhabitants will remain on site, but they won’t have the place to themselves. Security is expected to increase. “24-hour staff will be on site at the shelter,” says Morkert-Shibley. “This is in addition to lighting improvements during construction.”

Love it or hate it, the shelter may still succumb to a short shelf life. The shelter could close its doors when the Joint Office’s long-term shelter at 6144 S.E. Foster Rd. opens this year. And if you ask Denis Theriault, a Multnomah County communications coordinator who works closely with the Joint Office of Homeless Services, that’s the plan. “The shelter at DCJ East will remain open until Foster opens.” Theriault states that until then, “The shelter is going to stay in operation and isn’t moving and won’t otherwise be affected [by the renovation]. The other parts of the campus will be renovated, part of a years-long planning and design process that’s culminating with the long-expected start of construction.”

The idea that Wy’east might stay put—and become a mainstay—wouldn’t be up to any one party. “Any decision on keeping the shelter as a long-term facility would require a community conversation and also be guided, in part, by budget considerations around operational costs and potential capital improvements,” says Morkert-Shibley.

A sitting duck
As fencing has gone up around the Wy’east Shelter, fencing will come down around the Hansen Building this month. A sort of sitting duck, the streets surrounding the vacant property—which operated as a shelter for nearly two years—have continued to attract homeless individuals. An influx of DCJ employees could change this.

“That’s why we’re excited to activate this site; we’ve talked about how difficult it is to keep that site empty,” says Chris Fick, the chief of staff for Jessica Vega Pederson, Multnomah County’s District 3 county commissioner. “We put up a fence and we have regular patrols, but it’s still a magnet for activity. So we think having people there will be helpful.”

During the DCJ occupation, security will patrol the site during off-business hours. This could hint at a win-win for concerned neighbors and DCJ staff.

By utilizing the Hansen property, DCJ receives a speedier and cheaper remodel over at the East Campus. While Hansen’s site will house DCJ staff, the building itself will not receive any makeup. “Renovations or upgrades to the Hansen Building will not occur while DCJ staff occupy the site,” says Morkert-Shibley.

The eventual fate of the Hansen site is up in the air. There has been a lot of talk about what might come next for the space, which was reported to have a “host of code violations” at the time, including structural and sewer issues, swaths of asbestos and a potent fly infestation (“Whither Hansen? A look at life after the shelter,” MCM Aug. 2018). Despite its flaws, Hansen has not been forgotten.

“The Hansen property remains a key opportunity for east Portland and the neighborhoods around it. I am committed to finding a use for the site that will serve the long-term interests of the community,” says Vega-Pederson.

The County has not name-dropped any potential buyers, or looky loos—even as they circulate a FAQ sheet which states that the renovation will effectively “allow the County to continue conversations with entities that have expressed interest in redeveloping the Hansen site but who don’t need to purchase the property while it’s used by DCJ.”

Talking potential suitors, Morkert-Shibley comments, “There will be a public process when formal interest is solicited. For now, it’s too early to comment.”

If you have additional questions about DCJ’s renovation of the East Campus, contact Jessica Morkert-Shibley at 971-563-3735 or jessica.morkert-shibley@multco.us.