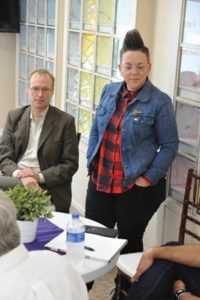 Marc Jolin, the director of Multnomah County’s Joint Office of Homeless Services, and Stacy Borke, the senior director of programs at Transition Projects, speak about homelessness in east Portland in general, and the new Wy’ East shelter for men specifically, at the September Gateway Area Businesss Association luncheon.
STAFF/2018

Shiny new toys, such as Gateway Discovery Park, are attracting foot traffic to east Portland streets. But not all visitors are tourists, and some don’t go home (or have a home). Whether the community is the one paying a price is becoming a point of contention.

Before the temporary low-barrier Wy’east homeless shelter, 1415 S.E. 122nd Ave., opened on June 13, it was already raising eyebrows. With 125 beds, the all-male emergency shelter––which prioritizes veterans, men with disabilities and men over the age of 55––stirred the Mill Park neighborhood and local media into a frenzy. A lack of communication between residents and Multnomah County left neighbors in the dark about the shelter until it was only weeks away from welcoming occupants. Local news outlets, such as KOIN 6, latched onto the panic and dug up another surprise: City zoning regulations stipulate that Wy’east can host a maximum of 75 beds. Yet, Wy’east debuted with a far greater head count. Moreover, a temporary permit can allow a shelter to exceed the 75-cot limit, which Multnomah County had applied for. But in an abnormal move, the permit wasn’t made available for public inspection on Portlandmaps.com.

Over the summer, tensions have both simmered and boiled. With east Portland becoming Portland’s new homeless hub, a question follows: Are the homeless costing you, or are you costing the homeless?

Every two years, Multnomah County conducts a “point in time” survey to help illustrate the distribution of Portland’s homeless population. The most recent 2017 survey unveiled that now more homeless people––22 percent––are unsheltered in Southeast Portland than in the Downtown/Old Town/Pearl District area.

On Sept. 13, Marc Jolin, the director of Multnomah County’s Joint Office of Homeless Services, and Stacy Borke, the senior director of programs at Transition Projects, were the guest speakers at a Gateway Area Business Association Luncheon. Homelessness in general, and the new Wy’east Shelter—run by Transition Projects—in particular, was the topic of discussion, with east Portland business owners encouraged to pose questions or concerns. The meeting was tense.

Jolin was discussing the Wy’east Shelter’s mobile team. Residents are encouraged to reach out to shelter managers and recommend people who might need assistance. An attendee mentioned a houseless woman she has encountered along Halsey Street who “believes people are taking advantage of her.” While this was an ambiguous statement, it prompted Jack Hagan, who owns Northwest Flyfishing on Northeast Halsey Street, to guffaw at the question’s wording. In the houseless woman’s defense, Gateway Area Business Association board member Karen Montez then interjected, “If she’s being raped or attacked, don’t laugh.” She then added, “You have no idea what she [the homeless woman in question] meant by that. Take a breath.”

Hagan conceded that he could not speak for “that gal.” Instead, he was reacting to the irony that the homeless are the ones “being taking advantage of.” In clarifying his point, Hagan calls temporary shelters like Wy’east a band-aid, advocating for mental health facilities or clinics before shelters. “I pick up trash outside my store every day, and it’s gotten way worse in the last six months. I’ve been picking up human feces for years, and I’m sick and tired of it.”

What’s more, Hagan believes that homeless individuals should be encouraged to give back to the greater community by performing cleanup duties. “I would like to see these shelters that are using our tax dollars put to good use in the communities in which they reside, meaning a little sweat equity and self-respect, so they [the homeless] earn their time.”

This was not the first time that shelter residents were likened to people in the prison system. Addressing a question framed in the same vein as Hagan’s comments later on, Borke stated bluntly, “People in shelters are not inmates.”

Enough is enough
Hagan is not alone in criticizing the character of some of east Portland’s homeless population. This summer, a concentrated group of neighbors from the Montavilla neighborhood formed Enough Is Enough PDX. It’s a city-wide campaign speaking out about public spaces becoming illegal camping grounds for houseless persons. The group is worried about heroin and methamphetamine usage, which might support “stealing from the neighborhoods they are located in on a daily basis,” according to a description attached to their Change.org petition. The petition is addressed to local police and city of Portland officials, including Mayor Ted Wheeler and Portland Police Chief Danielle Outlaw. The petition advocates for issuing a police memorandum clarifying that “officers are allowed and expected to enforce laws equally and not exercise discretion to consider individuals’ housing status to decide whether or not to enforce laws.”

The petition also takes aim at Multnomah County Health Leadership’s Needle Exchange Program, which the group views as a failure. They believe needles are too commonplace on public streets and that drop boxes should be installed in green spaces, such as Montavilla Park.

On Sept. 17, the heated group gained further media attention after it gathered and held a banner protesting the homeless camps from the Glisan overpass above the I-205. To date, their petition has garnered around 3,000 signatures of their target goal of 5,000.

Still, this is one side of the story. Others argue that #EnoughIsEnough, a trending online hashtag, might represent a vocal but impassioned minority.

As Hagan puts it, “I’m thinking of moving.” 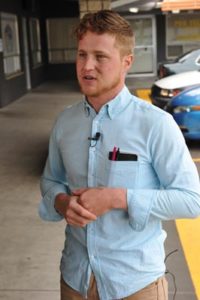 Embracing neighbors
Mill Park resident Caleb T. Coder, who moved to Portland from Montana a few years ago to attend seminary school, but now works in construction, is a regular at Mill Park Neighborhood Association meetings. The backyard fence of the home he, his wife and three roommates rent, meets the Wy’East property line. For Coder, interacting with Wy’East residents is a daily occurrence, and unlike those around him who own property, he sees those in the shelter as his neighbors.

Coder is critical of Enough is Enough PDX, believing the group does “not address the well-being of a whole community.” A free-thinker, Coder sees the current narrative as being “critical from a distance through social media or disengaged until [personally] affected.”

Coder poses a couple questions of his own: “What would it look like for a neighborhood to welcome its new neighbors? What does that narrative look like?”

On Sept. 21, joined by neighbors from Mill Park and Hazelwood, Community Investment Trust, Mercy Corps, Transition Projects, and the Joint Office of Homeless Services, Coder established a Parking Lot Eat and Greet near Wy’east. An impressive number of neighborhood businesses, including La Osita, Bridge City Taproom, and the Portland Mercado, contributed catered food. Wy’east does not currently have an established kitchen, with most residents eating crock-pot meals.

“We’ve never seen anything like this before,” says Denis Theriault, the communications coordinator for the Joint Office of Homeless Services. “I can’t remember a time when neighbors asked, ‘How can we welcome a shelter and show we are one neighborhood?’ The Mill Park and Hazelwood Neighborhood Associations have been contributing funding like snow cone and popcorn machines. They emailed us and said they have been happy [with Wy’east], and they’re planning a barbecue. It’s unprecedented.”

Roma Peyser, the director of development at Transition Projects, is also gracious. “The Eat and Greet is really exciting; it’s the first time we’ve done that type of event with a shelter.”

Peyser says there is no security at the shelter, but there has only been one complaint reported by neighbors since June. An Aug. 31 KOIN article, however, describes several: “Aside from one incident, all complaints have come from a single household whose backyard borders the site.” That single household involves a couple with small children who witnessed a drug transaction in July. On a separate occasion, they were flipped off by a “ranting man” outside the shelter. The couple has been critical of the shelter from the beginning.

According to a Wy’east FAQ page, there are three rules at the shelter: be respectful, be kind, and be safe. Underneath “be respectful” is a bullet point: Be a good neighbor.

More shelters, less homeless
If there’s anything people on both sides of the fence agree on, it’s rent. Transition Projects, which operates nine transitional facilities throughout Portland, including Wy’east, writes on its website that “Portland area rents rose by 13 percent in 2016.” This was more than three times the national average. Meanwhile, homeownership in Multnomah County is escalating into a pipe dream.

“The federal government, which has essentially withdrawn from the development of affordable housing in the last 30 years, has had the biggest impact,” Jolin stated at the Gateway business luncheon. “The county, city and housing authority have decided to add 2,000 units of affordable housing over the next 10 years. If we can deliver on that promise at least, we can make a real impact on what we’re seeing on our streets.”

Despite the net gains, the Joint Office of Homeless Services will continue to scratch its head. Makeshift shelters remain a stepping stone until people get back on their feet. The knight in shining armor? Affordable housing, including rent assistance.

“Four years ago, there were roughly only 4,000 people getting rent assistance,” says Theriault. “Last year, we helped 6,300 people stay in their apartments with rent assistance.”

For east Portlanders, more shelters are coming to a street near you. While the Hansen Shelter closed this June a few blocks away (“Whither Hansen? A look at life after the shelter,” MCM Aug. 2018) from Wy’east, another 120-bed shelter will open in 2019 at the site of a former Winly Cash and Grocery, 6144 S.E. Foster Blvd.

For the foreseeable future, the homeless will continue to stimulate community division and conversation.

“What if neighborhoods embraced shelters as a chance to give back to their communities without sacrificing livability?” says Coder. “I believe Wy’east Shelter presents just such an opportunity to our community. But success on that front will not be realized without work and support. To support and empower people to thrive.”

To learn more about the Wy’east Shelter, go to Transition Projects’ shelter webpage at tprojects.org/shelters. If you would like to donate clean clothes or fresh food, you can visit the shelter, or call Wy’ East Shelter Manager Avery Browning at 503-488-7730, avery.browning@tprojects.org.