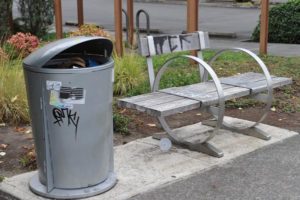 More trash cans and benches, like these in front of Riverview Bank, are set to be installed in the Gateway area. Sadly, vandals have been at work.
STAFF/2018

One man’s trash can is a community treasure. As the curtain closes on 2018, you’ll find more places to chuck your trash around the Halsey-Weidler business district. On Nov. 21, two new trash cans were installed outside Atomic Auto, 610 N.E. 102nd Ave.

As previously reported (“New benches and trash cans, thought to be long lost, set to appear around Gateway,” MCM Aug. 2018), six new, state-of-the-art trash receptacles come at an individual price of $2,500. They’re part of a $29,106 community livability grant on behalf of the Parkrose Heights Neighborhood Association, or PHAN. Prosper Portland is footing the bill.

The trash can grant will also see six benches installed around the same spots. Two benches were placed near the Immigrant and Refugee Community Organization, 10301 N.E. Glisan St., along with two outside Atomic Auto earlier this year.

The installation date for two remaining trash cans and two benches, also planned as part of the PHAN grant, will be placed at the “East Entry Triangle” separating Halsey and Weidler at Northeast 112th Avenue. By next spring, pedestrians will be greeted by much more than the lonely Douglas fir on the site. They can expect more firs, a bioswale, and a walking path, among other new additions. “The two trash cans for the Triangle are coming later on, as soon as the cement is poured,” says PHAN Chair Tom Badrick, who wrote the grant behind the trash cans and benches, as well as some of the grants contributing to the Triangle’s remodel. “I was walking by [the East Entry Triangle] the other day, and they have the plastic construction plugs in the ground where the cement is going to be poured. It still takes some imagination, but you can now say, ‘This is where the pathway will be.’”

Additionally, “locks will be installed on the trash cans, so some of the issues of mess around the garbage cans will be taken care of.” According to Badrick, this will occur in the first half of December.