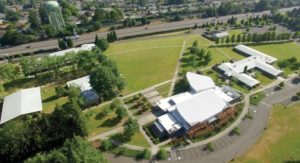 University of Western States came to an agreement to sell its 22-acre campus in the Russell neighborhood to Linfield college for $14.5 million last month.
COURTESY UNIVERSITY OF WESTERN STATES

Fast forward to November. Not only had the campus been placed on the market—attracting a bidding war—but another health care-oriented program announced that they would be moving as well. The fallout has further cemented east Portland’s reputation as a health care industry titan.

A win-win
The buyer is Linfield College, best-known as a private, four-year institution located in McMinnville, Oregon. It submitted its offer to UWS in June.

Linfield offers a popular Bachelor of Science in Nursing program, for which it has been renting space at the Legacy Good Samaritan hospital in Northwest Portland. The move, believe it or not, might make the program both more amenable and less competitive. “Linfield has been looking at options for a number of years, working with multiple nursing deans and nursing faculty members,” says Christian Feuerstein, Linfield’s director of media relations. “Our nursing program is very popular, and the existing Portland campus was just too small to accommodate the demand. We had students on waiting lists, really full classrooms, and just not enough space.”

Linfield’s lack of accommodations speaks to a national trend.

“In the United States, nursing schools turn away more than 64,000 students each year, largely due to insufficient classroom space, faculty and clinical preceptors. Oregon isn’t exempt from those pressures, and this new campus will allow us to meet the health care needs of Oregonians, while expanding our reach in Portland,” says Feuerstein.

The decision to make a pitch for UWS’ campus was a practical one. “It came about fairly quickly. The college had a real estate broker, who alerted us to this property being for sale over the summer. From there, the due diligence and negotiation process went relatively fast,” adds Feuerstein.

Most students enrolled at Linfield’s Portland campus will continue to complete their first two years in McMinnville, transferring as juniors: a policy that is not slated to change. Feuerstein hopes Linfield students will become active in and around their new digs. “We hope to be good neighbors [within the Russell neighborhood], and we look forward to assimilating into a vibrant community. Linfield administrators are planning to meet with community members in the near future to talk about our new home and their new neighbors.”

For its part, UWS has faith in Linfield’s ability to integrate. “UWS is thrilled. We feel the nursing school is an amazing fit for the neighborhood and the space. We believe they will be good neighbors for the Russell Neighborhood and east Portland. We have been here for more than 40 years; this has been our home, and we wanted to find a new owner who would continue to honor our relationship with our neighbors,” says Nugent.

No regrets
While UWS is happy to see Linfield fill its shoes, or at least its facilities, its decision to relocate kept its own growth in mind. UWS’ on-campus doctor of chiropractic program is getting bigger, and a review of campus facilities revealed that they’re not up to par. Built in the 1950s, the Russell campus buildings house outdated heating and cooling systems, electrical issues and aging water pipes. These were all factors that led UWS to sell, but they did not deter Linfield from buying. “We had a team of professionals conduct a round of due diligence on the facilities before we agreed to the purchase,” says Feuerstein. “There will be maintenance needs to consider, as there are on our McMinnville campus. We’re comfortable that we’ll be able to deal with those in our normal course of business.”

Buying as opposed to renting provides Linfield with some peace of mind. Portland’s commercial rental market is becoming less manageable, as has also been witnessed with its real estate market. According to the August 2018 Portland State University quarterly report, which covers the commercial real estate market, “year over year, rents have experienced a growth rate of 7 percent, largely because of buildings incorporating improved and innovative amenities, attracting top-of-the-line tenants.”

Selling a campus—or retaining one—is no easy task. That was made clear when Marylhurst University, a 125-year-old institution formerly located just south of Lake Oswego, shuttered due to financial difficulties this year. Negating this pessimism, Linfield and UWS appear to be surfing, rather than drowning. “UWS received two competitive offers that eventually bid against each other and did lead to an offer above asking price,” says Nugent. When all was said and done, UWS raked in $14.5 million with the sale, well over the $14.2 million listing price.

Commenting on the bidding war, Linfield confirmed, “Our broker negotiated what we felt was a fair price for the property.”

Though UWS is planning to move out by April, Linfield will move into the Russell neighborhood by fall of 2020. It’s leasing its future campus back to UWS until that May.

More good news: UWS is closing in on a new property, too. “UWS has chosen a location in Northeast Portland, less than three miles from our current space,” says Nugent. “We are in the process of finalizing details for the space and will make a public announcement very shortly.”