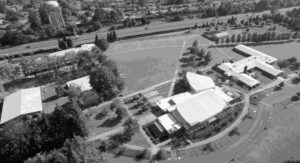 University of Western States is putting its 22-acre campus in the Russell neighborhood up for sale.
COURTESY UNIVERSITY OF WESTERN STATES

Nowadays, you can get an education just about anywhere: downtown, the Internet, and at east Portland’s University of Western States (UWS), a ballooning institution that specializes in integrated healthcare education.

UWS’s aging Russell neighborhood campus, 2900 N.E. 132nd Ave., was built in the 1950s as Marycrest, a girls’ Catholic high school. It was purchased by UWS in 1973 for $1.1 million. In a surprising twist, UWS hopes to celebrate the Northeast 132nd Avenue campus’s 70th birthday in a new location—one with improved facilities for students, employees and staff.

Make no mistake: it’s not every day a college puts its entire campus on the market. Yet, UWS is prepared to do just that in the name of staying local and moving into “sustainable,” modern new facilities.

According to Megan Nugent, UWS’s director of marketing, communications and public relations, UWS believes the time is ripe to move the campus in an undecided direction within its current 10-mile radius. “In the past five years, the university has grown in both our on-campus doctor of chiropractic program and online master’s and doctoral programs,” says Nugent in a statement meant to address the urgency of the move. “As a result, the institution has strategically commissioned an audit of the campus facilities to review the space constraints and facility issues in order to be the best stewards of university funds and to ensure optimal facilities for students and employees.”

Nugent says that results from the audit, in addition to input from students and staff, pushed UWS to consider “current and future space needs.”

For now, no new properties have been acquired. To nobody’s surprise, this move will not happen overnight. “The offer that the university is currently pursuing includes the purchase of the entire campus. If the potential buyer chooses to proceed after the conclusion of the due diligence period, the university would then thoughtfully transition to a new space over the course of the following one to two years,” says Nugent. “In that scenario, all classrooms and offices at the N.E. 132nd Avenue property would move. Off-site clinic properties are not part of this relocation.”

Issues that have been cited with UWS’s current facilities include outdated electric, heating and cooling systems, as well as deteriorating water pipes.

In with the new

Plans indicate that UWS would pay for the move through funds it attains from selling its current campus. It’s anyone’s guess where the new campus will be located. “We are currently reviewing buildings,” says Nugent. “The Board of Trustees has also indicated that whatever space we select must create a sustainable and excellent learning environment for students, as well as provide a meaningful experience for both students and employees.”

As with the audit, the UWS community will be able to contribute in efforts to relocate the campus. Nugent urges the school’s “internal community” to get involved in the planning process by attending one of two “feedback sessions” with BrainSpaces, the university’s consulting firm, which will be held later this summer. Following each feedback session, surveys will be sent out to gauge community feelings. UWS has also implemented a “facilities planning task force that has employee and student representatives,” according to Nugent. The task force will monitor input and discussion as the campus’s migration moves forward.

Asked if UWS might head in a different direction than a full-on relocation, Nugent remained open-minded. “The university has considered leasing space and has also received propositions from developers in the area to either build new space or move into existing space. At this point in time, all options are being considered.”

If you have any specific comments or concerns regarding UWS’s upcoming move, reach out to the university by calling Nugent at 503-251-2836 or sending an e-mail to facilitiesplanning@uws.edu.  n