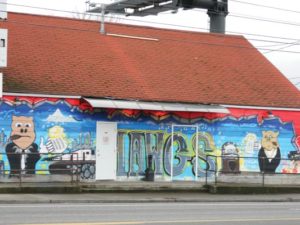 He’s a nighttime vigilante who often catches local crimes on his various storefront cameras (“Closed-circuit cameras fight crime,” MCM Aug. 2016) and acts as a tasteful patron of the arts.

In 2017, Olsen renamed the popular drinking hole Magic Inn as “Hawg’s 2,” 619 S.E. 122nd Ave., to connect it with his other business. As part of its new title and Olsen’s brand, Olsen hired a local graffiti painter and longtime friend, Morgan Young, to design a mural on the side of his Southeast 122nd Avenue business. The product: a large-scale image of a pair of pigs sporting evening attire and Tony Soprano cigars, with a vintage jukebox to separate them. To Olsen, the mural is an inviting addition to the community, one that is plagued by less attractive elements, such as theft.

“I wanted something different than what anybody else does. It’s graffiti art. It’s all done with spray paint,” explains Young, who claims he’s heard plenty of people walk by and praise the mural. “Every day during construction, there were no less than a dozen people who stopped and talk to him––about who he is and what he’s drawing. There’s always somebody who doesn’t like it, but when people are driving by, they’re looking at.”

Most people might not have had a chance to see Young at work, unless they were night owls. He is known for deriving inspiration out of the early morning hours.

“I have to admit, I love the money and that I get paid working with spray paint [Montana paint, to be precise] in front of a building at 2 or 3 a.m.,” says Young. “That’s when I get in my zone graffitiing the whole side of the building. There’s a little pressure knowing that everyone is going to see it even if they don’t know I’m the artist who did it, but I do well under pressure. Larry is a marvelous human being and a delightful boss.”

Olsen sought Young after discovering some of his other work around town. On a personal note, he’s even hired Young to paint a forest-oriented mural inside his house, which is still unfinished.

The process to finish the mural on Hawg’s 2 took about three to four weeks last October, but the trust between Young and Olsen surrounding Young’s creative process is what’s most unusual here. Olsen gave Young complete creative control of the façade of his business.

“You don’t do it in one day or two days. You look at it and you add more to it as you go,” explains Olsen. “It’s like decorating a room in your house; you don’t buy everything you need at first. You paint the room or put the floor in and then build onto it. That’s how an artist [works].”

Hawg’s 2’s new wall art has sparked celebration while events at one of Olsen’s other businesses––The Daily Double––created commotion in February. On Feb. 11, The Daily Double was robbed. “They spent enough time in there to take my safe,” says Olsen. “It’s the cost of being in business: you get people who plot and plan. I know who these people are, and they’re creative in how they did it. They got keys to my business and somehow got my alarm code and turned it off.”

Olsen, who has become addicted to installing high-tech cameras around the perimeters of his businesses, has already done the necessary math to solve part of the mystery.“They’re smart in one way and stupid in other ways,” says Olsen. “This is how good I am. The keys they left at the crime scene were copies of one of my keys, and there are only two places in Oregon where they sell these keys. He [the perpetrator] also pulled his mask down in a pitch-black area, which my camera picked up.”

Olsen claims he has provided police with footage.

To learn more about graffiti artist Morgan Young and his business, visit his Facebook page at facebook.com/morgan.young.7906.