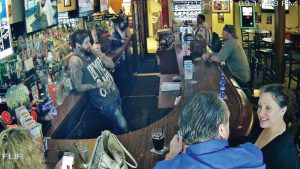 Larry Olsen records thousands of hours of mostly mundane activity on state-of-the-art video systems at his four east Portland bars. In addition, Olsen’s cameras catch the mayhem happening inside and outside his bars perpetrated by purse thieves, armed robbers, burglars, alleged drunk drivers and even murder suspects. In this still photo from his video, Olsen (back to the camera) is speaking to longtime customer Cory Lumber on the day she died. Her boyfriend, Spencer Johnson, sitting alone at the bar while she chats with Olsen, allegedly murdered her within hours of this video recording.
COURTESY LARRY OLSEN

Larry Olsen helps police bring criminals to justice with the assistance of his many closed-circuit television cameras (CCTV) inside and outside the four east Portland bars he owns. Olsen says the cameras keep customers safe by deterring illegal acts, but there’s still crime to record. 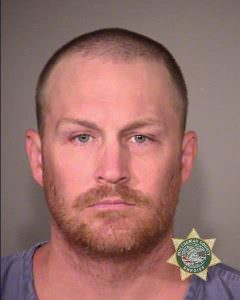 In July, Spencer Johnson, a frequent patron of east Portland bars, was arrested for allegedly murdering girlfriend Cory Lumber in their Southeast Portland apartment. They were at Olsen’s bar just hours before the shooting incident.
COURTESY MULTNOMAH COUNTY SHERIFF’S OFFICE

Friday, July 1, his cameras recorded longtime customer Cory Lumber with her boyfriend, Spencer Johnson, at one of Olsen’s bars a few blocks from their apartment. Just hours later, Johnson allegedly murdered her with one gunshot.

Olsen recently testified before the grand jury as to the video’s authenticity and the content of his conversation with Lumber that night.

Olsen said for business owners concerned about the safety and security of their customers and property, purchasing FLIR cameras (forward looking infrared) at $150 per unit is a small price to pay. He believes the technology is a worthwhile investment. Moreover, he’s happy to share his experience and expertise with others. While he believes he can’t change people, Olsen feels he can deter and detain them, as well as diminish their negative impact.

He’s seen about 40 incidents in a short period of time at his four east Portland bars: Boss Hawg’s Bar ‘N’ Grill, Mr. Dealer’s Double Up Cafe, the Magic Inn and the Daily Double Inn. The incidents range from people stealing wallets and purses to armed robberies, and now, murder suspects. He’s helped authorities catch and apprehend all of the perpetrators involved. Olsen’s cameras recorded a serious crash outside his bar, the Daily Double Inn, on Northeast Halsey Street at 162nd Avenue. The driver who ran the red light and caused the crash walked away, went in the front door of Olsen’s bar, paused, and then walked out the back and away from the scene before police arrived, avoiding any kind of field sobriety or breathalyzer test.
COURTESY LARRY OLSEN

In March, Olsen and his cameras helped nab a hit-and-run driver by sending high-quality video to the police. The driver had run a red light on Northeast Halsey Street at 162nd Avenue (in front of the Daily Double Inn) in the middle of the afternoon, crashing into another car and injuring both occupants. Olsen’s video shows the crash and the driver walking away from the scene; through Olsen’s front door, and then out through the back. Police caught him the next night. But by then it was too late to test him for alcohol impairment.

Infrared cameras manufactured by FLIR, based in Wilsonville, Ore., have been around since the late ’70s and are used globally in search and surveillance situations, including 9/11 and the Oklahoma City bombings. As the technology has improved, prices have dropped, and now these cameras are available and affordable for consumers. “Too many business owners are naive,” said Olsen. “We have these amazing tools at our fingertips. We’re not going to totally get rid of thieves, but we will put a nick in it and make a difference.” 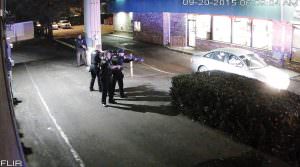 “The police and public working together is essential for keeping the public safe,” said Sgt. Greg Stewart, a sergeant in the Portland Police Bureau who supervises its Crime Analysis Unit. “We are always looking to improve how we partner with the public, and the use of video cameras is one way.”

Olsen’s cameras are two megapixel FLIR night vision IP address cameras, which run on fiber optics for high definition pictures. The clarity is equivalent to that of a $2,000 television set.

In many cases, the details are so good that Olsen can identify people by facial recognition. He’s even installed 14 cameras in and around his own home—a sort of testing ground.

“Unfortunately, there are people who see stealing or breaking into a car as ‘free money,’” said Olsen. “I’m happy to say that I helped put two guys in jail in February for 15 and 11 years based on the quality of the images on this camera.”

Astonishingly, one individual actually stole a puppy out of one of Olsen’s customer’s cars. Olsen assured the customer that he’d get his dog—and he did, two days later. This was after sending the video to local television station Fox 12, because they love animal stories.

It turned out the puppy thief was also breaking his Washington parole by committing a crime in Oregon. Earlier, the perpetrator had been in prison for kidnapping, sodomy and the rape of a young woman. “What does a guy like that need with a puppy?” asked Olsen. Police arrested the man after the story ran on the news.

Olsen talked to the felon’s parole officer, after which the parole was revoked and the man received a 13-month sentence for taking the dog. The dog’s owner was ecstatic that Olsen had gone the extra mile for him.

Then there was the infamous Don Pedro incident, in which thieves who had just committed a robbery went to Don Pedro’s restaurant at 615 S.E. 122nd Ave. to celebrate their success over a meal. Well, someone saw them enter the restaurant, and all of it was caught on video. Local police now use the video for training because the quality of the images is so clear and compelling.

A year ago, Olsen also helped apprehend a car prowler in his neighborhood. The prowler was wearing unusual Russian/Ukrainian athletic shoes and drove a Porsche Cayenne (which was somewhat unusual in Gresham). Again, Olsen sent the video to Fox 12, and the man was nabbed by local authorities.

“It’s sad that people that people will take something whether it’s worth $10 or $10,000,” said Olsen. “I’ll continue to do my best to curtail as much of it as I can. I’m happy that I can make a difference in the world and help my neighbors and customers.”