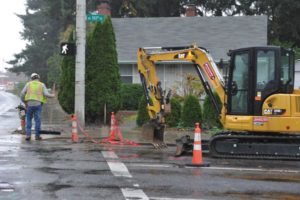 The Halsey-Weidler Streetscape Project will transition into more frenzied action in November. It’s time for the demolition of aging sidewalks on the Halsey and Weidler street corners from 102nd to 113th avenues. Later, wider sidewalks will be built in their stead. The entire project is expected to wrap up around May 2019. Expect traffic delays through then.
STAFF/2018

The Halsey-Weidler Streetscape Project seems fresh out of surprises. The Portland Bureau of Transportation’s (PBOT’s) project will revitalize the streets along the Halsey-Weidler business district (or “couplet”) from 102nd to 113th avenues. It was scheduled to begin early this summer and instead broke ground in September, though unchartered delays appear to be a thing of the past. “Construction is underway, and work is going according to schedule,” says Dylan Rivera, PBOT’s public information officer. “We ask the public to obey directions from flaggers and construction area signage. We appreciate the public’s patience as our contractor works to deliver a great new look for the corridor, [one] that will make it safer and more comfortable for everyone who is traveling to local businesses and traveling through the area.”

As reported last month (“Halsey-Weidler construction work more visible in October,” MCM Oct. 2018), most of the beginning work has been happening out of the public eye—or rather underground. PBOT has been digging for existing stormwater systems in spots where they intend to add conduits for electrical cables, as well as for foundations for incoming traffic signals and pipes.

With November comes the project’s transition into more frenzied action. It’s now time for the demolition of aging sidewalks on Halsey and Weidler street corners. Later, wider sidewalks will be built in their stead. The entire project is expected to wrap up around May 2019.

If you have any questions or comments concerning the Halsey-Weidler Streetscape Plan, take them up with its PBOT project manager, Elizabeth Mahon, at 503-823-0396 or elizabeth.mahon@portlandoregon.gov.