The Portland Bureau of Transportation plans to turn 103rd Avenue between Northeast Halsey and Clackamas streets, or “The street to nowhere,” as locals call it, into an outdoor seating area for customers of Namaste Indian Bazaar.
COURTESY PORTLAND BUREAU OF TRANSPORTATION

After a couple rainchecks, the Portland Bureau of Transportation (PBOT) has hit the play button on the Halsey-Weidler Streetscape Plan. When we last checked in with PBOT (“Halsey-Weidler Streetscape Project starts in September,” MCM Sept. 2018) about the Plan, which is due to modernize the Halsey-Weidler business district––the couplet that runs from 102nd to 114th avenues––an established production schedule was hearsay. Now that the contractor has been given the go-ahead, PBOT can discuss the Plan’s official order of operations.

Though construction broke ground in September, the Plan has not taken off the ground running to the naked eye. Business owners along Halsey-Weidler have noticed few indicators of what’s to come.

“I’ve seen street painting,” says Brad Fouts, the owner of Bradford’s Sports Bar. “The crews have been locating pipes, and they look like they’re doing preparation work. If you go down on 102nd Avenue, a sign says it will begin in September, but it looks like there’s been nothing yet.”

Dylan Rivera, PBOT’s public information officer, admits that so far, none of the work has been flashy. In fact, most work has happened underground.

“The contractor was given a notice to proceed [with the project] on Sept. 10,” says Rivera. “One of the first things they’re doing is inspecting utilities in areas where we expect to have to dig to put conduits for electrical cables or foundations for traffic signals and storm pipes. We need to know where old drawings say there is an existing stormwater system, and we have to verify that by digging down. That’s the first phase that the public will see this month.” 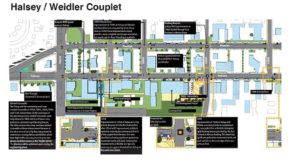 As temperatures drop, construction will heat up. At least, roadwork should become more visible to Halsey-Weidler business owners. “This underground work will go on for a couple of months. In November, we expect demolition and concrete work to begin on the corners of Halsey and Weidler, and that will involve the demolition of existing sidewalks at the corners, replacing those with wider sidewalks that are safer and easier [to access],” says Rivera.

Expect curb extensions on certain sidewalks. There will be new parking lanes and, in some cases, pedestrian islands. A final lane of traffic will be created for bikes.

Pavement grinding will be saved for last. It’s planned for the spring.

“They’ll start with spot repairs in March and be paving throughout April and May,” says Rivera. “The pavement maintenance project involves a pretty significant area of Halsey from the I-205 to 102nd Avenue, as well as from 102nd Avenue to halfway through the middle of 112th and 114th avenues. There will be a three-inch grind and paving job, which will remove top asphalt and replace it with fresh asphalt. This is maintenance repaving that should last a couple decades.”

New and improved signal poles and streetlights are also expected, but not until the springtime.

One controversial aspect of the Halsey-Weidler Streetscape Plan has centered around PBOT plans to relocate parking from its current position next to the curb out to the street. There, it will act as a buffer for incoming protected bike lanes. Businessowners shouldn’t expect to see these changes until March at the earliest.

Asked about the delay of the Plan and the possibility that it could take six months for the bike lanes to appear, longtime critic Fouts remains outspoken. “My opinion has stayed the same,” he laughs. “As for any delays, they’re a good thing. Our football season started two weeks ago, and they’re tearing up those streets now?”

Jason Shepard, of PBOT’s design and construction team, who’s been on the construction scene, maintains that PBOT is open to working with the community over the next eight months. “We’ve had ongoing conversations with the Gateway Area Business Association and other groups,” he says.

Rivera goes further, saying, “We’re hoping to work with the business community with ways to support them during construction. Those conversations are getting underway.”

If you have any questions or comments concerning the Halsey-Weidler Streetscape Plan, take them up with its PBOT project manager, Elizabeth Mahon, at 503-823-0396 or e-mail her at elizabeth.mahon@portlandoregon.gov.  n