Adopting “Windscape” could be the answer 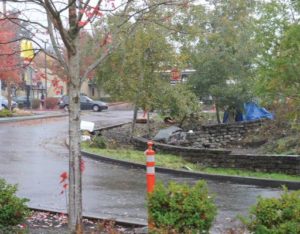 The traffic rounder at Northeast 102nd Avenue and Weidler Street known as “Windscape” has been a point of contention since 2013, when homeless campers began moving in. Efforts to redesign it and make it less hospitable for camping have been underway for years.
STAFF/2018

You would be hard-pressed to find anybody more concerned with the state of the “Windscape,” the rundown traffic rounder at Northeast 102nd Avenue and Weidler Street, than Tom Badrick. If you listen to Badrick talk about his relationship with this particular plot of land, it’s akin to hearing somebody in the thick of couples counseling. He’ll do whatever it takes to forestall a separation. “I think I see the light at the end of the tunnel,” says Badrick, the brain behind an up-to-$60,000 Prosper Portland-backed grant to rehab Windscape on behalf of the Parkrose Heights Neighborhood Association (PHAN). Badrick anticipated a setback last month (“‘Windscape’ renovation plans paused,” MCM Oct. 2018) in the planting schedule for the site after learning the project manager he has been working with from Prosper Portland, Susan Kuhn, is retiring. He now blames this anxiety on a miscommunication. “I had a conversation with one of the project managers, and they thought we needed an engineering drawing, but it’s just landscaping that we’re doing. If it was any kind of complicated design work, they would have to do the contracting,” says Badrick.

Badrick is wholly dedicated to restoring and maintaining Windscape. He wants to plant native trees and bushes, sprinkle some boulders around the site to discourage foot traffic and get the bioswale back up and running with the help of the Bureau of Environmental Services (BES). Still, some Gateway residents are skeptical of Windscape’s potential.

“What will it look like in five years after it’s remodeled?” asks Linda Allaway, an east Portland resident who is all too familiar with the site. “I seriously doubt that the funding provided can really make a serious difference. It is impossible to provide landscapes that will thrive without regular maintenance and an abundant source of water, neither of which will be available. The impact of transient use will destroy anything of value.”

Thinking outside the box, Badrick has already recruited a neighborhood group to clean the site once this summer. He’s also put together a separate cleanup crew, which he hopes will visit Windscape twice each month.

Allaway argues for native plants for the site. Previous efforts have brought in species that have turned out to be invasive. Badrick has already acquired a $12,000 Prosper Portland grant, also made out to PHAN, that will allow him to plant eight native trees. Douglas firs are the most likely candidates.

“The goal of the grant is to get trees around the Halsey-Weidler couplet, and it would be a way to accomplish two goals at once,” says Badrick. “There aren’t that many spaces I can put in a street tree, as there’s only so much sidewalk in the entire [Halsey-Weidler] corridor that’s wide enough. The planting season is coming up.”

Casually surfing the Portland Bureau of Transportation’s (PBOT’s) website in October, Badrick uncovered PBOT’s “Adopt a Landscape” pilot program that helps community members beautify their neighborhood by providing care and maintenance to the city’s medians, traffic circles, parkways, and other street area landscaping. The site explains that it offers an appropriate adoptee the proper permit to “use the free compost to repurpose, enhance and energize adjacent spaces of unimproved public right-of-way space (for example, planting strips, medians, or pathways).” This would give Badrick the go-ahead to landscape Windscape as he pleases without PBOT intervention, and it would allow him and a cleanup crew the right to look after the site.

“They have had about a dozen inquiries about the program this year,” says Dylan Rivera, PBOT’s public information officer, speaking on behalf of the Adopt a Landscape program. Rivera said the time it takes to review an application varies widely by project. “We will reach out to Mr. Badrick and Prosper Portland to learn about their plans and see if this program could be helpful to them,” Rivera added. Badrick doesn’t think it will take long at all. He says Rivera is helping him access the materials needed to apply, and he plans on doing this as soon as possible. “I think it’s a pretty straightforward process,” says Badrick. “I would use Prosper Portland’s money to pay for the landscaping work, and as a neighborhood association, PHAN would own the responsibility of maintaining it.”

Badrick is still waiting for Prosper Portland to approve landscape design firm Nevue Ngan’s final drawings for the site, but “adopting” Windscape could be the answer. “I’m highly confident that I will get all the support I need from Prosper Portland. Things change very quickly, but they haven’t been the holdup. If I can get them to understand that PBOT is ready to go, they will come loose with the money.”