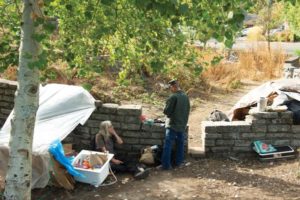 Renovation of the traffic rounder formerly known as “Windscape” at Northeast 102nd Avenue and Weidler Street has been delayed, which means it’ll be a haven for the homeless until the next sweep or until renovations begin.
STAFF/2018

Despite new hurdles threatening a speedy construction window, Tom Badrick is not backing down on plans to rehabilitate “Windscape,” the traffic roundabout island at Northeast 102nd Avenue and Weidler Street. As the grant writer behind the proposal, he’s determined to make headway on this passion project this fall. But he’ll need help.

“Windscape” has fallen on some summertime sadness. After a coordinated mid-season cleanup, the Portland Bureau of Transportation (PBOT)-owned property has seen a resurgence of homeless campers. Things also look bleak in terms of city approval for the site’s final design—the go-ahead that major construction needs to move forward.

As reported in August (“Traffic rounder redesign committee approves final site recommendations,” MCM Aug. 2018), one of Badrick’s passion projects is being funded, in part, by a $60,000 Prosper Portland grant. Design firm Nevue Ngan is waiting to unleash its final mockups for the site until PBOT gives it a thumbs up. According to Badrick, Susan Kuhn, the Prosper Portland project manager who was working with Badrick on the grant, is retiring from Prosper Portland. Left hanging, he believes her replacement won’t prioritize his project.

“I have nine grants I was working on with her [Kuhn], and now I’m in Neverland. The new person is supposed to start in October,” says Badrick. “I’ve gone ahead and done all the communication she was doing. I’m working with PBOT on an answer for ‘When will you say I can do what I want to do, and when can we do it?’”

One of Badrick’s main intentions for the site is purchasing boulders from the Bureau of Environmental Services (BES). He can spread the rocks around the lot to discourage campers. BES will rehabilitate the bioswale on the site on their own time. This is not an action that’s reliant on PBOT’s permission.

“In September, I started talking to BES about purchasing the boulders if I transfer the money to them, so we can get that done,” says Badrick, referring to leftover funds from the design portion of the Prosper Portland grant. Badrick thought he could nab some boulders from the co-occurring Halsey-Weidler Streetscape Plan, but that idea has been deserted.

Long-term thinking
With more campers, comes more responsibility. Badrick needs to clear litter from the site before anything else, as well as tear out non-native plants for incoming native species.

“Windscape” has a long history of being trashed. No group is committed to routinely cleaning the site, which explains its constant state of disarray. In response, Badrick has done the honorable thing: he got on his laptop.

Through the website Nextdoor.com, Badrick found people looking to mobilize. He’s in the process of forming a cleanup coalition made up of dedicated neighbors.

“While the trash situation across Portland has been worsening over recent years, I couldn’t help but notice how bad it’s become in the Gateway and Hazelwood area,” says Cheryl Thomas, who is planning on working with Badrick to pick up litter around east Portland. “Having recently purchased a home in Hazelwood, I wanted to find a way to improve the situation any way I could. I live near Ventura Park, and a beautiful new playground was installed last year, but the trash and occasional drug paraphernalia sprinkled around the area really take away from what could be a much more enjoyable spot if kept clean. This prompted me to purchase a ‘grabber’ and head outside and pick up every bit of trash I could find in the streets surrounding my home.”

Thomas claims she was encouraged after spotting a duck in her neighbor’s front yard. “He hadn’t moved in a while, and when we went to check on him we noticed there were various pieces of trash tied around his feet and wing.”

Likewise, Esther Mohrmann has also become acquainted with Badrick’s Nextdoor circle. She says that if she had to rate trash in east Portland “on a scale of 1 to 10, with 1 being Grandma’s yard and 10 being a teenage boy’s room, I’d say it’s an 8.”

Talking logistics, Mohrmann believes a group of eight or so members could rotate in groups of two to four and take to the streets weekly. She is personally willing to commit to four hours a week and “maybe more on weekends.”

The Nextdoor cleanup crew wouldn’t go to the “Windscape” every week, but they could be the ones to pave the way for the boulders. After that, they could return each month.