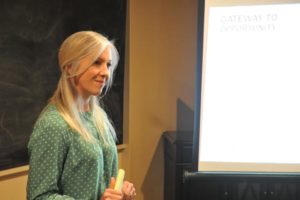 As early as 2019, you’ll have half as many lanes to choose from on parts of Northeast Glisan Street between Northeast 105th and 160th avenues. Starting next year, the Portland Bureau of Transportation (PBOT) plans to restripe popular sections of the street, minimizing the current five-lane configuration to three.

The city gives two reasons for the change: bicycles and death. According to crash statistics provided by PBOT, one person dies every other year on Northeast Glisan Street from I-205 to 162nd Avenue. Between 2006 and 2015, 46 people were seriously injured. In total, there have been five fatalities in the past decade: three people died in cars, while two were walking.

As part of PBOT’s upcoming East Glisan Street Update, the organization is planning on redoing three key pieces of Outer Glisan—Northeast 105th to 119th avenues, Northeast 125th to 145th avenues and Northeast 150th to 160th avenues—to make room for protected bike lanes and pedestrian crossings. The project will likely happen in two phases of striping work, one in 2019 and one in 2020, from the spring to the fall. PBOT maintains that similar happenings elsewhere around town have provided encouraging results.

“We’ve done lane reconfigurations, and we’ve had improved safety outcomes and more livable streets along inner Glisan between 60th and 82nd Avenue and on Southeast Division from 60th to 80th Avenue,” says PBOT project manager Timur Ender. “We found significant reductions in crashes and speeding, and for the most part, travel times and volumes were relatively unchanged.”

As previously reported (“Gateway to Opportunity Project means roadwork—lots of it,” MCM May 2018), Glisan Street’s game plan relates to two PBOT initiatives: Vision Zero, a 2016 Portland City Council-passed planning effort mandating that PBOT prioritize reducing car-related fatalities throughout Portland, as well as the Gateway to Opportunity Project (GOP). The GOP involves a series of construction projects assigned to Gateway with the goal of enhancing biker and pedestrian safety. 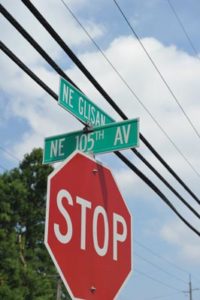 The Portland Bureau of Transportation has decided to remove traffic lanes along portions of Northeast Glisan Street between Northeast 105th and 160th avenues. The work begins in 2019.
STAFF/2018

While the GOP is invested in increasing connectivity and community in the area, its main priority is bikers. Gateway was chosen as one of 10 national neighborhoods by the nonprofit People for Bike’s Big Jump Project (“Bike lanes cause rift between city and Gateway businesses,” MCM Aug. 2017). For three years, People for Bikes will provide Gateway with $200,000 as a “nationwide challenge” to “double or triple bike ridership,” according to their website.

Community reaction
While news of restriping on Glisan has been public knowledge for some time, it was reiterated at the August Gateway Area Business Association (GABA) luncheon by PBOT project manager Liz Mahon. Attendees, many whom were local business owners or those who live near and use Glisan Street regularly, had varying degrees of awareness about PBOT’s plans, and most did not handle the news well. “The meeting was the first time I had heard of this action, and it came completely out of the blue. No warning at all,” says Ted Vogelpohl, who lives off Northeast 109th Avenue “on the Weidler side.” For Vogelpohl, who attended the August GABA meeting, PBOT’s plans for Glisan are all too familiar.

The Halsey-Weidler Streetscape Plan is another major upcoming PBOT project. It will add protected bike lanes from Northeast 102nd to Northeast 114th avenues along Halsey Street, the area that Vogelpohl calls home.

“What it’s [the East Glisan Street Update] going to do is force the local people to take side streets between Halsey and Glisan to make it out to east county. I’m one of them,” says Vogelpohl. “That’s going to put a huge burden on these side streets that these families have children on. I’m not going to be one of the ones speeding, but I’m worried for the safety of the children. Cars are going to try to manipulate the traffic congestion to get where they want to go.”

Resident Ken Pearce also attended the GABA meeting. He lives off Northeast 118th Avenue and Glisan. “When I first read about this, I thought, ‘How in the world are they going to do this and not affect the traffic flow at all?’ I can’t believe they could even propose cutting the lanes in half.”

Pearce has taken a more proactive approach than Vogelpohl. He asked Ender if they could meet for coffee, offering to pay. Ender obliged. “I said my piece and he said his,” says Pearce. “We both learned a little bit. I’ve been emailing him on a weekly basis, and I call it my ‘traffic report.’ Midday, I’ve seen that a left-hand turn lane [attempting to merge onto Glisan] gets up to a dozen cars during rush hour. If you strung out the traffic into one lane and back it up that far, there’s no way those cars will get through any Glisan intersections even if they ‘adjust the lights.’”

When Pearce refers to “adjusting the lights,” he says this was Ender’s answer to possible traffic congestion.

“The best way to explain it is that the signals are the source of congestion,” says Ender. “During a green face at 102nd or 122nd [avenues], basically three blocks of cars can get through the signal. For the rest of the street away from the signal, we can make safety changes by putting in bike lanes and pedestrian crossings without touching the [vehicle] capacity. That’s determined by the signal.” 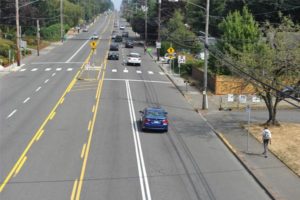 This section of Glisan Street from Northeast 129th to 145th avenues, which runs in front of Menlo Park Elementary School and Glendoveer Golf Course, is set to lose two lanes of traffic to bicycle lanes as part of the city’s East Glisan Street Update.
STAFF/2018

In addition, Ender says PBOT is looking to improve the signals in some spots along Glisan.

In PBOT’s defense
During Mahon’s presentation, she referred to PBOT as having “necked” the Glisan area. The term “necking” was lost on some in the audience. “It’s just a colloquialism,” says Dylan Rivera, PBOT’s public information officer. He and Ender insist that the restriping of Glisan was not a decision made lightly—or overnight.

“It’s two separate things,” explains Ender. “We have done traffic modeling on the corridor, and the other thing [Mahon] meant is that we had some field testing about two years ago where we set up a construction zone during rush hour on Glisan and 106th Avenue related to pavement testing, and we used that opportunity to see how the street performed with one less lane at 108th [Avenue]. We have real-world data to go off of.”

Moreover, PBOT is currently in the process of conducting additional modeling to reflect how affected areas of outer Glisan will appear in 15 years.

Unconvinced that traffic congestion won’t be a consequence, either intended or unintended, Pearce has lobbied Ender to consider an alternative: setting up fixed-speed cameras instead of restriping. PBOT has already installed similar items on High-Crash Network streets, such as Southeast Division between 148th and 162nd avenues. Portland’s Vision Zero Action Plan, activated in 2016, has allowed for cameras throughout four high-crash corridors as part of a pilot program.

It’s possible that PBOT could target additional streets in the future, but for now PBOT has its hands tied. “PBOT is a pioneer in using that type of technology in Oregon, and Portland is the first city to get the state legislature to give permission to offer speed safety cameras in Oregon. We can only cover four corridors currently, but they’ve been very successful at reducing speeding,” says Rivera.

On the other hand, Rivera suggests the cameras can only do so much. “They don’t solve problems like providing a safe crossing where there are hundreds and hundreds of feet until the next crosswalk. It’s difficult for children to walk to school and for neighbors to access parks and destinations. With the Glisan project, we’re able to make safer crossings. It’s a more comprehensive solution than the radar would be.”

Pearce argues that reducing lanes won’t do much to deter late night speeders he believes to be the root of Glisan’s bad safety PR. However, PBOT’s crash data from the last 10 years tells a different story. It depicts most crashes in the three-mile section project radius as “occurring most frequently in the 3 to 7 p.m. time frame,” says Rivera.

Street reconfiguration done deal
Currently, there are no plans to hold additional public forums to discuss the East Glisan Street Update, all but ensuring restriping along the arterial.

While you’ll be hard-pressed to find anybody at PBOT without bikes on the brain, PBOT sent out “a mailer to thousands of residents [i.e., car owners] that outlined two upcoming east Portland safety and transportation open houses earlier this spring,” according to Ender. The open houses were meant as springboards for gauging public opinion and concern.

Moving forward, PBOT will focus on lobbying the Oregon legislature for permission to reduce outer Glisan’s speed limit. “It’s a legislative priority for us. After we implement this project, the city can make a request to the Oregon Department of Transportation to reduce the speed limit,” says Ender. However, he notes that “often times, those requests are unsuccessful. The state says ‘No, you can’t reduce the speed limit,’ because they see it as a road that’s designed for a higher speed. Currently, Glisan is designed for that.”

It’s this design Ender will attempt to alter. In his view, Glisan is also “designed for crash-prone driving and travel.”

Still, some neighbors argue that the decision to cut Glisan in half may have been a discussion with the community, but it was never an open-ended one. “They’re holding an open forum, but they’ve already made up their minds,” says Pearce, admitting that he has been pleased with the one-on-one communication he’s exchanged with Ender. “They’re not holding an open forum about ‘How do we solve the speeding problem on Glisan?’ It’s ‘This is what we’re going to do, what do you think?” And if 90 percent of people are against it, they’re still going to do it. It’s not the right way to do things.”

Both Ender and Pearce attended an August 22 “Transportation changes—Gateway, 102nd and 122nd” meeting at the CherryWood Village Retirement Community. At CherryWood Village, Ender entertained public opinion on the East Glisan Street Update for what might be the last time before construction breaks ground next year. “It was about 90 percent against it and 10 percent for it,” says Pearce. “I only remember one guy being for reducing the lanes.”

If you want to learn more about the East Glisan Street Update, visit PBOT’s project page at portlandoregon.gov/transportation/75685 or contact project manager Timur Ender at 503-823-7084 to let him know what you think about the project. You can also e-mail him at timur.ender@portlandoregon.gov.