Bike lanes cause rift between city and Gateway businesses 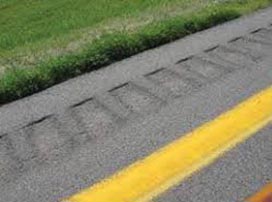 To prevent cars from drifting into bike lanes why not install Rumble Strips instead, obviating the need for the city’s project says avid bicycle rider Phil Norman, who lives in Gateway. Rumble strips are a series of raised strips across a road or along its edge, changing the noise a vehicle’s tires make on the surface thereby warning drivers of speed restrictions, or of the edge of the road.
OREGON DEPARTMENT OF TRANSPORTATION

Bikes are to Portland as houses of worship are to religion: They embody a deeply held ideology, as well as a lifestyle. According to the Portland Bureau of Transportation (PBOT), 7.2 percent of the city’s commuters travel by bicycle, making PDX the city with the most bikers per capita in the country.

And now, in an ironic move, the state government is trying to cash in on the success of its eco-conscious denizens. This past legislative season, Oregon became the first state to approve a $15 excise tax on the sale of bikes that cost over $200 with a minimum wheel diameter of 26 inches. The move made national headlines, and plenty of people are angry. Some may ask: What hot Portland commodity is the Oregon legislature going to tax next? Donuts?

The city of Portland, much like the Oregon legislature, is also bike crazy. One of PBOT’s next plotted moves is just as controversial—and it’s completely centered on Gateway, an area that locals argue city officials know little about.

Since December 2015, the city has set its sights on a redesign for bike lanes—and parking spaces—on the half-mile stretch of Halsey and Weidler between Northeast 102nd and 112th avenues. Cars, which are now parked next to the curb, will be moved over so that there is a protected bike lane between parked cars and the sidewalk.

PBOT has teamed up with PeopleForBikes, a national bicycling organization that doubles as a piggy bank for local city governments, in the hopes of spreading innovative biking practices. Right now, its sights are set on 10 different cities as part of its Big Jump Project. Through the Big Jump Project, PeopleForBikes aims to add cohesive bike networks that will increase bicyclist safety.

“We believe that the 10 cities participating in the Big Jump Project contain the right mix of community leadership, technical expertise from city staff and projects in the pipeline to prove the concept: If a community completes a network of convenient and comfortable places to ride and encourages people to use it, bike use will double or triple over a three-year period with reductions in serious crashes for all modes,” explains Kyle Wagenschutz, the director of local innovation for PeopleForBikes.

Wagenschutz believes Gateway is a solid template for incorporating the bones of the Big Jump Project.

“The Gateway neighborhood in Portland is no exception to these ambitions,” says Wagenschutz. “Gateway contains all of the characteristics we were looking for in a city, as described above, while also offering some unique perspectives that other cities around the U.S. may learn from: the community-led planning and fundraising of Gateway Green as a new outdoor recreational destination inside Portland’s city limits, the proximity of the Gateway Transit Center and its role connecting residents beyond the neighborhood limits and the diversity of residents and business owners participating in activities and campaigns to make their neighborhood better.”

PBOT is set to receive a handout of $200,000 in technical support from PeopleForBikes each year for three years. Additionally, there will be $50,000 in matching funds or financial commitments from local organizations. And that’s not all: as the Memo previously reported, Prosper Portland has also dedicated $500,000 to the Northeast Halsey/Weidler corridor. 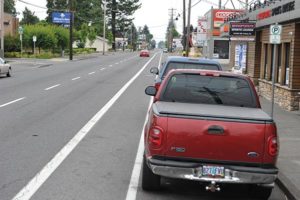 Business owners along the Halsey-Weidler corridor in Gateway, from Northeast 102nd to 112th avenues, are concerned about losing what few parking spaces there are to a plan to create bicycle lanes between the curb and parking spaces.
STAFF/2017

This may seem like an innocent directive, but it has caused quite a stir with some of the local businesses situated along the stretch.

“They have not alerted me of anything,” explains Brad Fouts, who runs Bradford’s Sports Bar. “I went to the meetings, and my understanding was that we were going to lose all parking on the opposite side of the street, and they were going to move the bike lanes over to where the parking stripes are. They have no interest in helping small business, and we all expressed disapproval. They [Prosper Portland] don’t care.”

Fouts says the changes are bad for his business, which is already struggling. He notes that the city’s plan may appeal to increased safety for bikers, but it’s putting automobiles in the hot seat. Logistically, he claims he sees around three bikers a day pass by his bar, which means bikes have nothing on cars.

“I’m totally up in arms about it. Right now, on the sidewalks, bicyclists knock my customers over as they walk out of the bar,” says Fouts. “Think of the little old lady who pulls up wanting to get out on her driver’s side and now she’s opening her door to traffic instead of a bike lane.”

Phillip Norman, another Gateway local, agrees whole-heartedly with Fouts. He claims the city has little interest in the perspective of the people who populate the area they’re so set on altering.

“Biking is my main form of exercise,” says Norman. “I want to be a part of the conversation, but I’ve showed up at meetings and representatives from the city act like they don’t want me there.”

But Norman has taken things a step further than Fouts by proposing an alternative solution to the current plan, in the form of rumble strips.

Rumble strips, also known as “drift lines” and “drunk bumps,” are placed alongside simple painted lines to alert inattentive drivers about encroaching danger. In this case, it could prevent cars from drifting into bike lanes. Thus, there would be no need for the city’s project.

In response to Norman’s solution, Michael Andersen, a Portland-based writer for PeopleForBikes that is assisting Prosper Portland with this specific project, responded with, “I think rumble strips can be useful in some cases, but they make it hard for a bike to get in or out of a bike lane because they can catch a bike tire. In our observation, the most successful parking-protected bike lanes—there are more than 100 around the country—are the ones that add barriers between the auto parking lane and the bike lane. That makes it clear to most people where they’re supposed to park. I’m not aware of any parking-protected bike lanes that use a rumble strip for this purpose.”

With or without rumble strips (and it’s most likely without), the city’s plans are set to proceed. When asked if the proposed bike lanes will annihilate some parking spots altogether for local businesses, PBOT Public Information Officer Dylan Rivera retorted with an open-ended response: “Without knowing specifically which businesses, it’s hard to know what to say,” says Rivera. “The plan generally has been for minimal parking removal. In many places, we observed lots of vacant, unused on-street parking spaces, so reductions to those would have little to no effect on area businesses. In fact, the improved access for people walking or taking the bus to local businesses would improve [overall] access to area businesses. And the overall redesign of the corridor would give it a more welcoming identity, making it a place where people want to stay and shop rather than a place where people simply drive through on their way somewhere else.”

The matter, unfortunately for some businesses like Fouts’, is a question of “when” rather than “if.” It is unknown when the new bike lanes will see the light of day, as both PBOT and Prosper Portland were mum on the subject when reached for comment. The project was initially slated for completion two months ago. BikePortland.org states that PBOT plans to complete the project by 2019.

“I believe it’s coming at the beginning of next year,” says Norman, who has eagerly researched and followed the blueprint from its inception. “And it will pit automobiles against bikes.”

Hopefully, the city has chosen its side wisely.