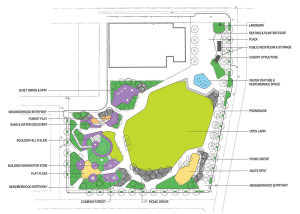 First, a skeptical reader asked what’s the cost of the new trash cans and coming-soon benches, and why the Halsey/Weidler couplet improvement plan did not simply use Portland’s standard tubular blue bench seats and gray-bottomed, black-topped plastic-lidded trash cans that already line the south side of Halsey Street and the north side of Weidler Street? Short answers: The direct cost of the freshly designed trash cans and benches is $0, since this design work, material and labor cost, including installation, was borne by a PDC grant funded by the local property tax base (in accordance with tax increment financing), the application for which was written by PHAN Chair Tom Badrick. And the new designs are because we are talking about something new here, not business as usual.

So where is the near-term progress that has been promised by various agencies and individuals over the past several months?

The last of the futuristic trash cans have been installed on either end of Riverview Community Bank at 10401 N.E. Halsey St.

Badrick says the prototype of the bench was due from the vendor in December of 2015 but has been inexplicably delayed. When it arrives from the vendor, the prototype will be reviewed by Gateway Area Business Association before the remaining three or more benches are ordered. Pressed for why the prototype delivery was delayed by two months and who vetted the vendor, Badrick said the vendor had not answered Badrick’s emails and that he planned to telephone the vendor to obtain a status update. Prototype delivery, approval and bench installation is now expected, according to Badrick, late March 2016.

PDC Pilot Program grants have been awarded to nine businesses along the corridor (“PDC Pilot Project participants named” MCM November 2015). Visible storefront improvements for some of these businesses are just around the corner, according to Seanette Corkill of Frontdoor Back, the consultant hired by PDC to “vision” storefront improvements that increase a business’s visibility and accessibility and aesthetics. The “visioning” process was supposed to have concluded in December of 2015, and contractors and subcontractors were to have been already chosen based on bids against Requests for Proposal (RFPs), but these steps have not yet concluded. Frontdoor Back is still interviewing contractors and “parsing costs” to determine whether desired improvements are within the various Pilot Program grant recipients’ PDC-assisted budgets.

Also, according to Corkill, Metropolitan Contractor Improvement Partnership registrants were consulted to ensure a “double win” for the affected storefronts and the diverse community stakeholders. She said the selected “lion’s share” contractor, whom she declined to name, “would use the clients’ subs.” Corkill believes that the general contractor, subcontractors and property owners/developers are pushing through the numbers in anticipation of a weather change that will give cover to actual work beginning. She said five of the six remaining successful Pilot Program applicants—with the singular exception of Furniture Plus, which she described as “in the dark”—are close to being costed out and design completed. “It took a little bit longer than I thought,” said Corkill about the design-to-cost process that is needed properly to fund PDC’s Pilot Program businesses.

According to Corkill, Kings Omelets, McGillacuddy’s Sports Bar, Portland Adventist Community Services food pantry—three of the four corner anchors of the couplet will see nearly immediate visible improvements. Namaste would be the fourth corner anchor that apparently will see visible improvement soon. Look for new landscaping at Kings Omelets, an added parapet at McGillacuddy’s Sports Bar, a new Halsey Street-facing entrance at PACS and further cleanup work at Namaste Indian Cuisine restaurant to anchor the Halsey/Weidler couplet improvements in the near future.

Nidal Kahl, owner of Furniture Plus across 103rd Avenue from the future Namaste, said that he is ready to go on major work to his store—in “six figures” contrasted with the modest $10,000 PDC Pilot Program grant—but that he awaits a clearer identity and streetscape concept so his newly renovated space will anchor or at least compliment its new neighborhood. Kahl is encouraged by recent progress across Northeast 103rd Avenue at nearby Namaste and is optimistic: “Positive change is coming, sooner rather than later,” he said.

PP&R recently completed a supposedly transparent public renaming process for Gateway Discovery Park at Northeast 106th Avenue and Halsey Street (“Beech Park, Gateway Park (re)named” MCM February 2016). Phase 1 construction drawings are complete, according to PP&R Media Relations officer, Mark Ross, and Phase 2 construction drawings should be done by May 21, 2016. Phase 1 construction (site utilities, excavation, grading) is scheduled to begin in April and Phase 2 construction (hardscape, landscape, play area, walkways) is scheduled to begin in July, according to Ross. A Gateway Discovery Park groundbreaking ceremony is Saturday, May 7, 2016 at 11 a.m., said Ross in an email. The public is invited. Completion is expected by summer 2017 (although a recent report that Gateway Discovery Park’s construction costs are well above original estimates might impact scheduled completion).

The highly visible Halsey-hugging site of the future Namaste Indian Cuisine restaurant was tagged with graffiti last fall while the property lay vacant with its windows papered. Some interior demolition work on the future home of Namaste Indian Cuisine restaurant began in late January and some squatters who were “occupying” the rear recessed entrance off Northeast 103rd Avenue apparently have moved on. Namaste’s architect, Lorraine Guthrie, said that PBOT is supposed to design and construct the widened sidewalk and parking area along Northeast 103rd Avenue, and she said she believed it would be five or six months before the design work is done. Namaste owner Harjinder Chand stated in late December 2015 that only one or two months of work was needed after permitting and before opening a rather expansive Namaste Indian Cuisine restaurant, gift shop and cooking school that PDC has dubbed a key “corridor enterprise” (“Renovation slowed by transportation improvements” MCM October 2015). It remains to be seen how a widened sidewalk and needed parking will be accommodated around this Northeast 103rd Avenue and Halsey Street corner.

According to PDC’s Anne Mangan, Gateway Discovery Park was originally scheduled for excavation to begin in 2016, since delayed by two months. She said the acre of property adjoining Gateway Discovery Park is a small piece of a $61 million Portland Housing Bureau RFP. PHB is leading the bidding process, and it is expected that recommendations on funding and site selection will be made in late 2016. Mangan said the green triangle park is part of the streetscape project, including some agreeable form of protected bike lanes as well as improvements that PBOT and PDC recently stepped up along stubby Northeast 103rd Avenue off Halsey Street (“City requires new building owner to improve street to nowhere” MCM September 2015) that will go out for bids late this summer. In the Pilot Program, Mangan said cost estimates have been received and design review scheduling is in process so far for only three of the nine successful applicants: McGillacuddy’s Sports Bar, PACS and Kings Omelets. Mangan confirmed that Namaste Indian Cuisine restaurant now has its building permits. The demand beacon marked crosswalk at Northeast 106th Avenue and Weidler Street is part of the couplet improvements, explained Mangan, but is not PDC funded.

When asked whether wastewater management, sidewalk and street improvements—including parking along Northeast 103rd Avenue and couplet-proximate marked crosswalks, curb extensions and ADA-compliant curb ramps—are on schedule to be completed by July 2016, PBOT’s Public Information Officer, Dylan Rivera, said in an email that “the planned right-of-way improvements on Northeast 103rd between Northeast Halsey and Clackamas will be incorporated in the Halsey-Weidler Streetscape Project. PBOT is currently about halfway through engineering plans for the streetscape project. Final plans are expected in summer 2016. The project is scheduled to go out to bid fall 2016. Construction of [Northeast] 103rd improvements would most likely occur by mid-2017.”

He adds, “PBOT is currently working with PDC, BES, adjacent property owners and the community on the design for right-of-way improvements on [Northeast] 103rd [Avenue]. The goal is to develop a flexible right-of-way design that will support the needs of adjacent businesses as well as create a sense of place and opportunity for future community events. On-street parking availability and stormwater facilities are to be determined by this collaboration. Sidewalk will be constructed on the east and west sides of 103rd (minimum of 12 feet) to accommodate café seating and increased pedestrian activity. Utility conflicts have not been determined. PBOT will work with public and private utilities to relocate facilities if they conflict with the planned right-of-way improvements.”

About the rest of the couplet and east triangle park improvements, Rivera said “PBOT is working with BES to determine stormwater requirements for Halsey-Weidler based on improvements that are triggering stormwater requirements. Improvements at the East Entry Triangle ([Northeast] 112th and Halsey/Weidler) will be incorporated into the streetscape project. The design for the triangle currently includes a public plaza and stormwater facility. The city also received a grant to pilot the use of solar technology to power streetlights in the triangle as well as the pedestrian rapid flashing beacons for both crossings near the triangle (on Halsey and Weidler [Streets] at [Northeast] 112th [Avenue]).”

Badrick was forthcoming about the status of the triangle park designed for the small plot of land due east of JP Morgan Chase bank at Northeast 112th Avenue, the tiny signature plot literally wedged in the Y of Halsey and Weidler. Badrick said that Nevue Ngan’s design work is done, the water feature is in and the work with PDC, PBOT, PP&R and BES is on schedule for ground to be broken late fall of this year.