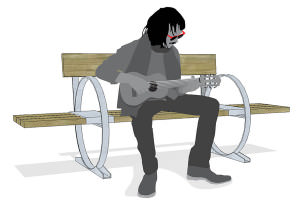 Benches like this artist’s rendering will be installed along the Halsey/Weidler couplet in Gateway. Featuring Alaskan yellow cedar and a satin-finish stainless steel frame that is complementary to recently installed trashcans. At least four are set to be installed between 102nd and 111th avenues by year’s end.

The Halsey/Weidler couplet improvement project is as multifaceted as it is ambitious. Various pieces all need to come together to have a beneficial impact on Gateway. These pieces include: Possible speed reduction on Northeast Halsey Street between 102nd and 122nd avenues; the addition of benches and trashcans near Northeast Halsey and Weidler streets between Northeast 102nd and 112th avenues; the planned east triangle green park with a beacon crosswalk, swale and signage at the Halsey and Weidler streets split at Northeast 115th Avenue, the planned Gateway Park and Urban Plaza at 10600 N.E. Halsey St.; the adjacent lot meant for development; the ongoing and planned sidewalk and crosswalk improvements on Halsey between 102nd and 122nd avenues; the older storefront improvement projects funded in part by Portland Development Commission and the newer Halsey Pilot Program improvements scheduled on Halsey and Weidler Streets between 102nd and 112th Avenues, also funded in part by PDC grant money.

Each individual project has merit and they could work together well, but real synergy requires a critical mass of these individual projects coming together in a reasonable timeframe. So is this multifaceted and variously managed-and-funded super-project doable, or is it dreaming at best and down a rabbit hole at worst?

How many different organizations are involved here? Eight, by the Memo’s count. Perhaps more important, who is in charge? Well, PDC certainly has the highest number of involvements, because of its chartered emphasis on grants.

Tom Badrick, Halsey/Weidler couplet work group member, says the minor couplet improvements are coming along. The group has proposed to PBOT a consistent and moderate speed limit of 30 mph along Halsey and Weidler streets between Northeast 102nd and 112th Avenues. Ultimately, ODOT will decide the petition and designate the speed along the couplet, a decision Badrick estimates is still eight months away. Meanwhile, five of seven “Back to the Future”-esque trashcans—UFO-topped, satin-finish, aluminum over carbon steel over an invisible cast-iron base—have been installed on private property between Halsey and Weidler streets and from Northeast 105th to 111th avenues. The remaining two are slated for installation following what Badrick describes as some needed digging on either end of Riverview Community Bank at 10401 N.E. Halsey St.

An artist’s rendering of the prototype bench features Alaskan yellow cedar and a trashcan-complementary satin-finish stainless steel frame. Badrick estimates that four or five benches will be installed by year’s end.

The cloistered east triangle green park design, created by Nevue Ngan with some abbreviated public input, is nearly complete (“Community offers ideas for east triangle design” MCM July 2015). Originally planned features included a pedestrian plaza, an eco-info kiosk, a footbridge, a miniature rainforest, a bench and a “GATEWAY” sign spelled out in massive 3D block letters, all arrayed about a lone, iconic Douglas fir tree. Ben Ngan, owner of Nevue Ngan, said the final engineering phase of the design is crawling forward but that Nevue Ngan’s planned completion is in tune with PBOT’s engineering work on the streetscape. The final design and engineering should be completed by next spring. Ngan also noted that probably the “GATEWAY” block letters will not be included because of PBOT concerns that it would be more distracting than informative.

Portland Parks and Recreation’s public involvement manager, Elizabeth Kennedy-Wong, says that neither the plan nor schedule for Gateway Park has changed (“Gateway Park plan presented” MCM May 2015). This means that the design and approval processes will be complete in December and that preliminary construction efforts begin January 2016, with completion slated for March 2017. Kennedy-Wong says the renaming of Gateway Park is in process; with the naming applications window now closed, a naming decision should be coming soon. So the family-oriented, multi-use, three-acre Gateway Park that is a cornerstone of the Halsey/Weidler couplet will become visible as a work in progress early next year. (According to Kennedy-Wong, Beech Park in Argay also is on schedule, its design unchanged; it too will be officially renamed soon.)

Seanette Corkill of Frontdoor Back is optimistic about the visioning and planning process undertaken last month. According to Corkill, all nine of the pilot project grantees have been engaged in ideating and planning visibility, access, colors and other storefront look and feel issues in an attempt to “extend their brand presence on the street [while improving the district’s brand] one business at a time.” McGillacuddy’s Sports Bar and Portland Adventist Community Services have made initial branding inputs, obtained ideas from Frontdoor Back, reviewed those ideas relative to their inputs and approved going forward to contact contractors and obtaining bids for grant prioritization purposes. Most other grantees are in the middle of the visioning project, having given their branding inputs and reviewed Frontdoor Back’s ideas. Slower progress is nearly on hold, according to Corkill, for grantees Namaste and Furniture Plus, which she describes as being on the Frontdoor Back’s “back burner.” Corkill admits the most difficult aspect of the project is to honor individual business preferences while attempting to build a unifying Gateway District message. She draws from the themes of the east triangle park design elements from the work group, the neighborhood association and the Nevue Ngan design folks. The goal and challenge is to build a collective with individual personalities, a broad brush of unique brushstrokes that should become evident along the Halsey/Weidler couplet in the spring of 2016.

It is fair to ask whether the agencies tasked with project goal setting and achievement have an established and favorable record in terms of meeting budgets, transparency, public involvement, working relationships with other agencies and on-time project completion.

PDC is certainly involved in more projects than any other player. More importantly, perhaps, PDC has purse-string control of the many projects it funds. Moreover, according to Badrick, PDC is “interested in supporting … Gateway … in becoming all it should be.”

Next month, the Memo analyzes these criteria to determine the likelihood of synergistic success of the Halsey/Weidler couplet projects.