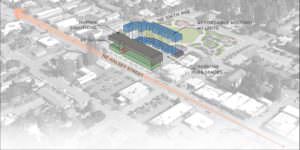 Human Solutions, Inc. has recently bid for and won exclusive rights from the Portland Housing Bureau to negotiate and develop low-income housing and retail space adjacent to the new Gateway Discovery Park on the Halsey/Weidler couplet at Northeast Halsey Street at 106th Avenue. The plan includes a new headquarters space for the nonprofit.

In other words, Human Solutions’ proposal most likely will be implemented by PHB, but the final use mix will be determined “through further negotiations.”

So much for a high-end, highly visible Halsey/Weidler couplet build-out that might have been Gateway’s crown jewel.

According to Uhlman, when PDC and Portland Parks & Recreation acquired the parcels in 2008, “there was general agreement” that three acres would be for a park and one acre would be for mixed-use development. That agreement was approved by Portland’s City Council as part of the park’s Master Plan. This differs from some reports that PP&R ceded the one-acre parcel to PDC.

According to sources, 27-year-old Human Solutions has completed 18 new housing developments to date—only two of which are mixed-use and have a substantial commercial component—with the 17th believed to be the recently completed Glisan Commons at the corner of Northeast Glisan Street and 100th Avenue.

The 40 residential units would include a mix of studios and one-, two- and three-bedroom apartments.

According to the proposal subject to negotiation with PHB, “Gateway Park will implement screening criteria designed to reduce barriers for families of color and to affirmatively further fair housing. Examples of relaxed screening criteria include: reduced income-to-rent ratios; greater leniency toward negative credit history; relaxed scrutiny of residency, history of evictions or unpaid landlord collections; and ability to accept residents with certain criminal histories.”

To keep costs down, the three-story residential building would be wood-framed and modular, with the modular units assembled off-site and then brought and connected together with mechanical, electrical, plumbing, skin, roof and circulation on-site. Also to keep costs down, no elevator would be provided, leaving the three residential stories to be circulated or traversed on foot and by stair. On the other hand, Human Solutions is budgeting higher exterior skin costs based on recent negative design reviews of less expensive exterior materials.

“Human Solutions will finance, manage and own the retail/commercial building, creating a valuable asset for the organization that will also significantly contribute to delivery of the mission of the agency,” according to the proposal. Human Solutions’ proposed development fee (albeit 100 percent deferred in favor of as-needed contingency loans back to the development effort): $925,000.

Human Solutions itself intends to move from its current “outdated, inefficient space” located at Southeast Powell Boulevard and 122nd Avenue to occupy the entire second floor and thus the entire office space of its supposed mixed-use office and retail center in Gateway.

The proposal says Human Solutions has a secret would-be “public partner that is interested in substantial office space and major community facilities.” That partnership would expand the office opportunity by an additional 70,000 square feet, according to the proposal. And Human Solutions is “aware that an adjoining parcel to the west could also be available for purchase and incorporated into a larger plan.”

Housing at the proposed mixed-use Gateway Park is not the only thing about the proposed Gateway Park project that is low-income. The retail space itself, according to the proposal, would “[i]nclude in the base construction budget a ‘warm vanilla shell’ [a basic shell structure with HVAC thrown in] finish level, which will decrease the amount of out-of-pocket investment required by retailers to complete tenant improvements and thereby increase access by smaller and less well-capitalized retailers to the retail spaces.”

Human Solutions planned in January of this year to have the option/contract executed by March 2016, and zoning approval would be obtained by December 2016. Construction would begin upon permitting in March of 2017 and would be completed in April of 2018.

Linda Robinson, who was on PDC’s Project Advisory Committee (PAC) for the Gateway Regional Center Urban Renewal Area said in an email that PHB did not “talk with any of the individuals who spent so many years (about 15 years) working on the Gateway Urban Renewal citizen advisory committee (which PDC disbanded a year or two ago).” Indeed, the Master Plan of a few years ago envisioned a high-quality, mixed-use building on the undeveloped couplet site with “market rate” housing on the upper floors with “eyes on the park” and a quality ground-level restaurant opening onto the park, Robinson said.

Uhlman’s emailed response to concerns over the proposed use mix of rental and retail space said: “The award is made to a development team and a project concept, but it takes months (sometimes years) of work to shape a project that is responsive to numerous competing demands, including the priorities of the local community. While the selected development teams are typically vested with the responsibility for outreach to the community, given the community’s interest in this project, PHB will insist on robust outreach and community involvement in the design and programming. While the 40 units of affordable housing are non-negotiable, the community will have opportunities to provide input on all aspects of the project, including the affordable housing portion, as the project moves forward.”

Robinson claimed that there are other parcels in the Gateway Regional Center Urban Renewal (URA) area that would be more suitable for an affordable housing project, some of which are already owned by PDC. Uhlman refuted that claim: “PDC does not own other property in Gateway beyond the transit center parking lot.”

Robinson claimed that PDC previously has rejected two bids for a similar low-income housing and commercial project in this signature undeveloped Halsey/Weidler couplet space. Asked about two prior proposals that were rejected by PDC, Uhlman said, “Previous iterations of the proposals submitted did not maximize activation of the plaza and/or sufficiently address the community desire for a mixed-use development.”

So what’s the next step? “The negotiation process will involve PHB, Gerding Edlen and Human Solutions, with engagement by PDC as well,” said Uhlman via email, concluding that PDC will “continue to be a key partner working on programming of the site.”

“In the short term, PHB in partnership with PDC will negotiate with the selected development team, using the NOFA proposal as a starting point,” Uhlman said. “During initial negotiations, PDC and PHB will ask the development team what its plans are for incorporating public input, including that already received, as well as on an ongoing basis,” Uhlman concluded.

When asked directly about the public part of the decision-making process, Uhlman said, “More broadly speaking, the Halsey-Weidler Group has served as the advisory body to PDC and bureau partners on the Halsey Weidler Investment Strategy … The community in the form of [Halsey/Weidler Work] Group and others will continue to be involved as the project moves forward … [t]he process—including opportunities for public involvement—is only just beginning.”

PDC holds an open house for its Gateway Action Plan Wednesday, May 11, at the Immigrant and Refugee Community Organization, 10301 N.E. Glisan St., from 5 to 7 p.m.  n