Things were hard enough for Robbin Martell last September when one of the double doors leading into her shop, Hearts Décor Interiors & Accessories and SOS Moving Management, 10630 N.E. Halsey St., was shattered with a brick. The crime underscored a losing battle between Martell and homeless vandals following a series of strikes. Martell says they defecate on the property every day.

She remained optimistic. She figured an increased presence by Portland Bureau of Transportation (PBOT) construction crews—set to occupy the Halsey-Weidler couplet as part of the ongoing Halsey-Weidler Streetscape Project until May—would keep her street safe. Instead, Martell was mortified to find her entire building sealed off by construction crews.

For the past couple years, there has been marked opposition and resentment emanating from Halsey-Weidler business leaders toward aspects of the Streetscape Project. The plan calls for the creation of a refined “Main Street” within the Halsey-Weidler couplet, from roughly 102nd to 112nd avenues. But until they were in the thick of it, few predicted the exact impact of construction on their Gateway shops. For some, it’s been hell; for others, purgatory; for the rest, limbo. 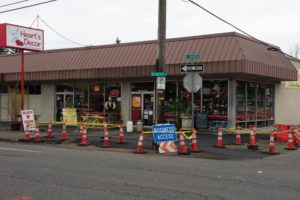 Hearts Décor owner Robin Martell is feeling the pain of road work in front of her shop. The Halsey-Weidler Streetscape Project is expected to continue through May 2019.
STAFF/2018

Bad timing
“We started to feel it in October,” says Martell. Hearts Décor Interiors & Accessories offers consignment services to seniors; SOS Moving Management helps seniors move out of family homes. “We don’t have enough parking for our full crew, and we started hearing a lot of complaints from our consigners and customers saying [the street] looked so treacherous. They said, ‘We haven’t stopped in because it looked too hard to get to.’”

Martell bemoans PBOT’s decision to position construction during the holiday season. Aside from the construction, she claims 2018 was looking like a better year for business due to a forecast of less snow and ice. “We had new consigners come in, but the construction pulled the rug up from underneath us. The vibration of the equipment was so bad that there was stuff falling off our shelves.”

Meanwhile, the all-women gym Curves, 10634 N.E. Halsey St., has also seen less foot traffic. “There has been some decrease in people coming in because of the parking. They will come and circle around the buildings a couple times, then leave if nothing is open for them,” explains Curves’ owner, Karen Hume.

Curves shares a back-parking lot with three businesses, so a lack of parking in front—a byproduct of construction—has added a competitive tension that dissuades Curves’ generally older customer base. Many Curves customers have their gym memberships covered by their insurance plans, such as Medicare. “In some cases, I am paid by the member’s wellness program per visit. So if they don’t come in, it potentially reduces revenue for me,” says Hume.

For Hume, the timing is also not ideal. As previously reported, Curves is up for sale (“Curves owner to sell and retire for good,” MCM Dec. 2018). Less customers at her business could mean less customers interested in taking over her business. Hume was attempting to sell by the end of the year.

“The little old lady”
Some components of the Halsey-Weidler Streetscape Project have drawn more ire than others. Construction-related complaints underscore some of the historical issues Halsey businesses have had with the project. Chief among them is the argument that Gateway’s population is more likely to be behind the wheel, or even in the passenger seat, before being on the seat of a bicycle. As part of the Streetscape Project, street parking will be reimagined. It will no longer sit next to the curb; it will instead serve as a buffer (requiring parallel parking) between traffic and incoming protected bike lanes.

Brad Fouts articulates his neighbor’s concerns best with his depiction of the “little old lady.” Fouts, who operates Bradford’s Sports Lounge, 10346 N.E. Halsey St., says PBOT is not interested in the “little old lady who pulls up on her driver’s side” and finds that “she’s opening her door to traffic.” Above any other aspect of the project, Fouts argues that the bike lanes highlight the age gap between the real people who shop along Halsey-Weidler and the demographic PBOT is attempting to attract to the area. The populations native to Curves and Hearts Décor Interiors & Accessories support this theory.

“When they put that bike path in, I’m going to lose a lot of my parking where the old people park,” says Martell.

On the other hand, PBOT can’t deny that it’s future-minded. Dylan Rivera, PBOT’s public information officer, contends that the Halsey-Weidler Streetscape Project would reduce a minimal amount of parking while improving walking access for pedestrians through curb extensions and street lighting, such as at the intersections of 103rd, 106th, 108th and 112th avenues on Halsey-Weidler.

PBOT is tackling discontent head-on through the upcoming East Portland Arterial Streets Strategy (EPASS). EPASS will look at street improvements throughout east Portland from a “holistic” standpoint, according to Shane Valle, who represented PBOT and EPASS at a Gateway Area Business Association meeting last November. Valle stated, “We’ve been doing these one-off roadway reconfiguration projects without thinking about how they’re affecting the system.” Valle says PBOT wants to “nip and tuck” where they can make east Portland’s arterials safer while reducing both traffic deaths and traffic. EPASS will thrive off a “broad public outreach strategy” through four focus group meetings and public surveys, according to project manager Steve Szigethy.

Purgatory
In response to her business woes, Martell did something out of character. She ranted about them on NextDoor.com.

“We’ve had a lot of pity sales,” says Martell. “There are people coming in and helping, and I was touched. I didn’t think anybody cared. I had one lady named Edie come in, and she made me cry. She was saying, ‘Please don’t leave [the neighborhood].’ I had no idea our store meant that much to the community. I need more encouragement, because it’s a struggle to survive here.”

Martell acknowledges that she’s had shifting views of the city’s copious plans for east Portland. She says the nonprofit Venture Portland helped her with a grant. She suggests the introduction of Gateway Discovery Park rallied more people to her shop, but this was short-lived as construction took over. Ironically, the park is also a potential nail in the coffin.

“[Our property owners] might not renew us because there’s been more interest in the area because of the park,” says Martell, whose lease is up in two years. “We’re wondering how long we can hold on. We don’t have any insurance to cover the broken windows, and my landlord doesn’t cover it. We had to decorate it for camouflage.” Countering the stress, Martell holds out hope that it will all work out once construction concludes this spring. Hume echoes this sentiment, but with pause. “It’s a long time until May when this is supposed to be completed. Traffic seems to be moving smoothly, so I suspect they might be shutting down or scaling back on construction.”

Speaking for PBOT, Rivera paints a different picture. “Regarding Halsey-Weidler, construction has not been delayed. We have not received any complaints about construction impacts.”

If you have questions or concerns about the Halsey-Weidler Streetscape Project and its construction timeline, contact project manager Elizabeth Mahon at 503-823-0396 or elizabeth.mahon@portlandoregon.gov.