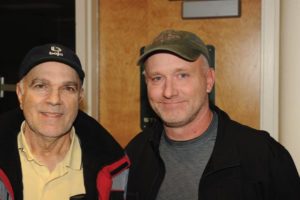 Metro is funding a grant to create a master plan for one of the largest undeveloped parcels of land in Portland: the 32 acres of farmland at Northeast 122nd Avenue and Shaver Street in the Argay Terrace neighborhood. Split into three parcels, the property is owned by the Rossi, Garre and Giusto families, who have farmed the land for many decades. Al Garre, left, and Joe Rossi, who represent two of the families, are pictured here at a Comprehensive Plan meeting in 2015.
STAFF/2015

The Rossi, Giusto and Garre farming families are teaming up to explore opportunities for future development of one of the largest undeveloped parcels of land in Portland: their 32 acres of farmland at Northeast 122nd Avenue and Shaver Street in the Argay Terrace neighborhood. Funded with a $112,500 Metro Construction Excise Tax grant, the families, with the community’s help, want to create a master plan for a complete, healthy and connected neighborhood on the property. “The grant is for planning purposes,” explains Barry Manning, the senior planner for Portland’s Bureau of Planning and Sustainability (BPS). “The goal of the study is to develop a coordinated concept master plan for the farm site, plus some other ancillary parcels in the area, not a development proposal.”

Nicknamed the “Rossi Farm Plan,” the project is expected to be completed in the summer of 2019. “At the end of the process we’ll have a plan, not a development proposal,” Manning said. The families are not bound by the study’s conclusions. “We hope we’ll be able to come up with something that’s a win-win-win. We’re [the city, Metro and local families] interested in making sure the community has some benefits to it, whether it’s commercial services that make sense for the neighborhood, improved connectivity or connections to open space—or there’s more housing that could be provided to meet the needs of families over a variety of income ranges, whether it’s affordable or market-rate housing.”

On Dec. 11, nearly 100 spectators attended the Parkrose-Argay Development Study Workshop, which was hosted by Historic Parkrose and the Argay Terrace and Parkrose neighborhood associations. The event welcomed all ideas, big and small, for what could become of the combined properties.

Joe Rossi contends that his family history and contemporary east Portland speak to a “continuing story of people seeking opportunities in America.” And while Rossi might be about as far from an immigrant in 2019 as one can be, he wants to see Parkrose preserve its all-American melting pot ethos.

While broad public interest in the project speaks to the community’s future, its success could depend on three families and their connection with the past.

A family matter
All three families—the Rossis, Garres and Giustos—have possessed their respective parcels that make up the 32-acre quilt since the 1920s. Back then, with large tracts of land available, eastern Multnomah County was a hotbed for Italian immigrants who relocated their fervor for farming and family across the Atlantic.

Over the years, the families became just as interwoven as their property is today. The modern-day Rossis and Giustos, for example, are related due to two cases of intermarriage dating back to the late 1910s. The Garres have grown into close family friends, and the three groups have cradled their roots side by side for three generations.

The purpose of the grant is to create a master plan for a complete, healthy, connected neighborhood, not a development proposal for the 32 acres. The families are not bound by any of the study’s conclusions.
COURTESY BUREAU OF DEVELOPMENT SERVICES

“[All] our families came from villages in the same region of Italy and spoke the same Genovese dialect, which was common before the language in Italy was standardized just before World War II,” says Rossi, explaining the families and their closeness. Thus, the decision to put their combined soil on the market was not only considered a broader community—it was a family matter.

The idea sprang from Rossi’s interest in representing Parkrose, as well as his position as a property owner. City planners came to recognize him at meetings focused on the 2035 Comprehensive Plan. “They approached me about applying for a Metro grant because I had been attending about two years’ worth of city meetings,” says Rossi. “I tell people I felt like a season ticket holder on the process. The city applied for the grant on our behalf, and we were one of the very few applications that were voted for funding by Metro.”

According to Rossi, Metro is seeking solutions for developing land parcels that can strategically address immediate public need in the long-term. “Metro found that as large land parcels get broken up for development, opportunities get missed to evaluate how sites could best serve the public. Usually this step-in property discernment is out of the budget. Throw in also the immediate need to deliver a return on investment, and one can see how different the potential outcomes could be.”

Rossi recognizes that east Portland is changing by the day. This means its customs, including farming, are effectively altered due to an increase in people and development. Rossi worries over the conflict between the past and the present. “Farming in an urban environment is very difficult and not sustainable. This process will help us plan ahead with the goal of making smart future decisions. The challenges and added costs of having a farm in the city mean we should plan ahead in partnership with our neighbors.”

Wish lists
As the Rossis, Garres and Giustos have merged as families, Rossi sees his study as a tool to better blend neighborhoods. In accordance with this tone, many community leaders appeared at home at last month’s Development Study open house. “I thought there was a great turnout with good representation from the Argay [Terrace] and Parkrose neighborhoods,” says Annette Stanhope, president of the Parkrose Neighborhood Association.

Doug Cook, chair of the Argay Terrace Neighborhood Association, also finds the project meaningful. He says Joe Rossi consulted with him months ago on ways Argay Terrace residents can participate throughout the process. “After presenting the information to the ATNA board, I responded that I believed the process would be a great opportunity that would ensure that neighborhood input would be heard regarding the future of the farmland, and we would like to participate in the process.”

Cook says a “neighborhood grocery store” is at the top of most Argay Terrace resident’s wish lists. Though he represents the 6,000 residents of Argay Terrace, he sympathizes with Parkrose and its unique concerns. “ATNA recognizes that the Parkrose area has faced many deficits. The loss of restaurants, retail and neighborhood gathering places over the last several years has created a feeling of nonsupport for our community neighborhoods. Opportunities that other neighborhoods throughout Portland have at their disposal are but a dream for Parkrose neighborhoods.”

At the moment, there is no concrete list of takeaways from the open house, but city officials see some themes. “We are still compiling information and expect to receive mailed-in questionnaires, but here are our initial impressions: people responded favorably to the idea of adding retail and other community serving uses on the site—the type and scale is to be determined,” explains Manning. “Small-scale retail like coffee shops, restaurants and other gathering-type places seem to be desired, as well as a mid-size or specialty-type grocers. On the other hand, we did not hear any strong desire for any large-format [big-box] retail on this site.”

Manning adds that interest in housing on the property was varied. “There was some desire for affordability, but there was quite a range of opinions about the type and scale/size of housing. There was some feedback about the need for larger family-size housing.”

For his part, Cook does not think affordable housing should be the focus. He extends “concern” that the city sees the 32-acre site as a potential solution for the affordable housing crisis when “our community already has a balance problem with affordable housing.” For example, Cook cites the “disproportionate amount of low-income housing we have in our neighborhoods” in relation to the high percentage of Shaver Elementary students who are on free and reduced lunch. “The percentage is such that it discourages many young families from moving into our area. And for those who do, many opt to send their children to other [places] for their schooling.”

Manning says Metro is eyeing a draft of a “summary report” of wants and needs that will be compiled by January. He expects feedback to continue to trickle in through two large public workshops to debut in the first half of 2019. They will “likely focus on discussion of master plan alternatives (possibly to consider three different site layouts and use allocations) and then sharing information and taking feedback on a preferred master plan.”

Currently, there are workshop questionnaires online—with no cutoff date—that seek public commentary. An online questionnaire was also expected to be released around the beginning of the new year. Still, the study itself ends this June. 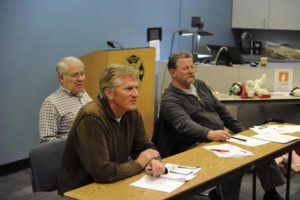 Development a long way off
If you think you’ll know which seeds Rossi and co. are planning for their soil by summertime, you better pull up a chair. While the intentions behind the study are clear, any definitive development plans for the farmland are possibly a long way off. “The only preconceived ideas at this point are very general,” says Rossi. “Some common ideas the families have heard and like are that the site connects our three Parkrose School District buildings well [Shaver Elementary, Parkrose Middle School, and Parkrose High School] along with our new Luuwit View Park. A grocery store would be great, scaled in a size that best serves our neighborhood. A nice commons area for folks to gather and have coffee, breakfast, lunch and dinner. Possibly a brewery experience.”

When asked when construction might break ground, Rossi shrugs. “Really, I don’t know. The timing will depend on when the study says something can be viable to do. Anything that does happen at some point will most likely be phased in sections over a long period of time.”

The city is in the middle of putting together two teams to mitigate the Development Study. The project will spend most of its budget—$85,000—on a group of consultants who are described by Manning as “private-sector firms that will do the actual market conditions research, economic analysis, and creation of master plan drawings [layout, streets] and land use allocations [type of uses, size, units].” Additionally, the city seeks a “Project Working Group,” or an ongoing advisory group made up of a mosaic of different organizations and voices from the affected communities. “BPS asked local neighborhood and business associations, and some organizations that work with underrepresented communities, to appoint a representative to participate. Their role is as a two-way communication conduit to the respective organizations and constituencies, and they may also offer advice and feedback on aspects of community engagement and some aspects of the concept master plan. Their role is advisory, and they are not a voting or decision-making group,” says Manning, explaining the Project Working Group.

To be clear: any final say concerning what will be built atop Rossi’s ancestral soil will come from the three families. Rossi has not made clear when this could occur, but he does have a preference or two. As one might expect, it hearkens back to a Mid-county of yesteryear. What’s surprising is that it also speaks to the future. “Speaking personally, I’m hoping for a project where we don’t have to get in our cars often—something like our historic Parkrose business district once had in its early history on Sandy Boulevard.”