Gateway Discovery Park has no friends … yet 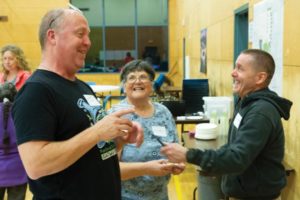 From left, Tom Badrick, Linda Robinson and Christopher Masciocchi chat at the first meeting that is attempting to form a Friends of Gateway Discovery Park group for the new park on Northeast Halsey Street at 106th Avenue.
STAFF/2018

Tom Badrick likens political decision-making in east Portland to the Catholic Church. “If you don’t start letting new people in now, you’ll never let them in,” says Badrick. “We need to get new blood going so it’s not the same people on every committee making the decisions.”

Badrick is encouraging a changing of the guard.

“We have a really thin leadership team in Gateway, and we have at least 35 people who want to get involved,” says Badrick, who is also in charge of the initiative to clean up “the Jughandle,” the roundabout island at Northeast 102nd Avenue and Weidler Street. “With all the new people we have moving in and all the energy coming in, it’s up to us to help them become the next us.”

However, no resounding public interest has revealed itself at public events promoting the park’s group.

Low turnout
On Oct. 25, Badrick, along with other community leaders such as Kimura, decades-long chair of the Hazelwood Neighborhood Association (HNA); Christopher Masciocchi, a 35-year resident; and Robinson, a decades-long HNA board member, put together an open house looking to recruit members for Friends of Gateway Discovery Park at the Immigrant and Refugee Community Organization building, 10301 N.E. Glisan St. In a stroke of disappointment, the open house attracted less than a half-dozen spectators.

Badrick explains a lack of marketing involved with the event. “We had a brief turnout because if you just post on Facebook, you’re not going to receive a huge throng of people.”

Robinson oversaw publicity for the event. When asked at the open house about the methods she utilized, she said there was no form of paid advertising involved. She posted the event on several social media pages, including the group’s Facebook page and Nextdoor.com. Additionally, she sent out individual emails to those, she said, that she “might know who might be interested.”

The poor showing was not predicted; however, neighbors who neither own a computer nor have home internet access are often overlooked in these types of e-mail- and social media-only outreach attempts.

In a comment at the open house, Masciocchi brought up Sunday Parkways as evidence that Gateway Discovery Park is on people’s minds. Sunday Parkways, a Portland Bureau of Transportation (PBOT) event, returned to outer Northeast Portland this year on Aug. 19. One of its main selling points was the debut of Gateway’s new parks. It involved a 6.4-mile-long walking and biking route constructed around different green spaces where pedestrians could sample “music, food and fun finds,” according to PBOT.

According to Masciocchi, 17,000 people attended this year’s Sunday Parkways this year. Along with Badrick, Robinson and Kimura, Masciocchi is helping put together the Friends of Gateway Discovery Park group. “The Sunday Parkways was anchored at the new park.”

So, where were these people at the Oct. 25 meeting? While it’s difficult to answer this question for sure, Badrick admits it has hurt the group. “We’re having a little hiatus because of the turnout,” says Badrick, claiming the group has still not formed and likely won’t until after the new year. “But we’ll return to the task after the holidays.”

Diagnosing the open house’s low turnout, Badrick questions whether its purpose was clear to the community—even those who attended. “I’m an organizational person; you can’t just say, ‘Come to the meeting and talk about what you like about friends’ groups.’ Most people don’t know what one is,” says Badrick. “At some point, you need to stop having meetings about how to have meetings and do something.”

Good intentions
The face of east Portland is becoming less recognizable, even if community leaders are tiring of seeing their own. In 2011, the Pamplin Media Group revealed that four in ten people in east Portland are people of color, compared to about one in four throughout the rest of the city. It was also in 2011 that the Portland City Council approved plans to build a 3.2-acre park that would become Gateway Discovery Park. The founders of Friends of Gateway Discovery Park are eager to welcome change.

“It truly is a new day in Gateway,” says Masciocchi, discussing the significance of the Gateway Discovery Park inauguration this summer. “Over 10 years in the making, seeing the park literally overflowing with a wildly diverse sea of smiling faces at the grand opening was evidence that the need for quality infrastructure in outer east Portland is very real. It also shows the importance of building infrastructure that encourages social interaction and that the opportunities for doing amazing things in the Gateway Regional Center are virtually unlimited.”

Badrick sees the foundation of Friends of Gateway Discovery Park in two lights: as a passing of the baton but also as a learning opportunity for newcomers. “I think there are people who need to take a leadership role and discover what that means, and then [the park] will be great. But it’s like with being in a political office; the same people shouldn’t be doing it very long.”

Badrick will continue to check his e-mail for piqued curiosity. “Suddenly, a lot of young people are moving here, and I can’t think of a better time to get a new generation moving. I want to see new people step up and get involved, so we have new perspectives. If you do this stuff forever, you can get in a rut.”