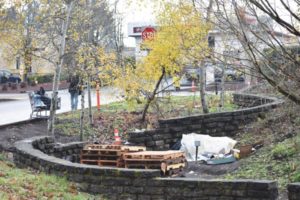 Renovation of the traffic Jughandle also known as “Windscape” at Northeast 102nd Avenue and Weidler Street is still on track; it’s just been delayed a little. Until renovation is finished, however, it continues to serve as a place for homeless.
STAFF/2018

Last month (“Adopting ‘Windscape’ could be the answer,” MCM Nov. 2018), Badrick admitted that the Portland Bureau of Transportation, or PBOT, which owns the property, had misunderstood the renovation’s creative process. PBOT expected engineering drawings, but all Badrick needs money for is landscaping. After clearing the air, Badrick expected to receive the green-light. He was wrong, and more was needed.

Even as Badrick and PBOT clarify terms, he still needs Prosper Portland to seal the deal. After all, Prosper Portland is picking up the bill. But Badrick may have ordered too much off the menu. “I’m frustrated with Prosper Portland, but we’re at the last couple things (before construction). They should be going smoothly, and they aren’t,” says Badrick. “I still have people offering to clean it up when it’s time to set up, which is the best thing I’ve seen in Parkrose Heights since I’ve been associated with the neighborhood. I want to be able to say, ‘Here’s when we’re going to do the stuff.’”

Taking control
To be clear, Prosper Portland and PBOT have never prioritized the so-called Jughandle. As it’s on PBOT-owned property, Badrick has spent the latter half of 2018 trying to concoct original ways to make progress against the slow movement at the city level.

A volunteer group independent of PHAN initiated a cleanup of the property this summer. Soon after, the efforts were undone when homeless campers returned to the grounds and trashed it once again. From there, Badrick realized a more regular cleanup crew would be necessary in order to maintain the site post-renovation. “Litter patrol is about to get ramped way up,” says Badrick. “We’re talking about a whole April month-long series of events to do littering and recycling around east Portland. We haven’t even formed this team yet, but I will have a meeting with people next month and a full proposal.”

Earlier this fall, Badrick stumbled upon a group of east Portland neighbors bemoaning the trash situation around east Portland—specifically around the Windscape site—on the website Nextdoor.com. Nextdoor.com networking provided enough participation to put Windscape on track for a potential biweekly cleanup. That is, after the grant is fulfilled.

In another move, Badrick is now on the path to officially “adopt” Windscape from PBOT. While it would remain PBOT-owned, PBOT’s “Adopt a Landscape” program could allow Badrick to oversee plantings and maintenance. “I have all the support I need from PBOT, and I now have the right person at PBOT to help me get the permit process taken care of,” says Badrick. “What I’ve done is simplify the budget and the plan to show that we’re not doing anything that requires a complicated permit. So they should be able to say yes pretty quickly.”

Mixed signals
Badrick claims the majority of the Community Livability Grant he was promised for Windscape has gone toward design firm Nevue Ngan Associates’ mock-ups for what could be done with the site. Now he’s struggling to find the funds to bring any of the pictures to life.

Back at the drawing board, Badrick considers reorienting leftover money from other grants. The original proposal for Windscape would have allotted $98,000 to Badrick’s Windscape grant, but he notes that number is now down to a total of $53,000. “Right now, I’m over budget. I need to find a way to whittle it down,” says Badrick. “One of the things they[Prosper Portland] can easily do is authorize another $8,000 toward this. If they just took $6,000 out of my $12,000 tree grant, I could apply it to the Jughandle. When I submit my final draft of the tree grant, there should be about $6,000 left over. There’s always money leftover in these [money] pots for things that never gets used. Why can’t we use it here?”

Since Badrick would be putting the $6,000 from his tree grant toward trees on Windscape, he imagines hitting two birds with one stone. “We had a $14,000 grant to do a drop-off station for Gateway Green, and they [Prosper Portland] wants to pull the plug on it, but that’s $14,000 that could be applied somewhere else. It’s actual money that’s been submitted. It’s not theoretical money,” says Badrick.

In terms of transferring funds, Badrick says he’s continuing to garner mixed signals from the powers that be. Badrick thinks Susan Kuhn, Prosper Portland’s project manager, might have something to do with it. She’s been his point of contact, and she’s retiring this year.

Her replacement, Thea Munchel, has displayed some optimism. “We are excited that we have been able to contribute to the Windscape project to date and would consider additional fund requests for the project in the future, if it were to successfully go through the next round of the grant process,” says Munchel.

Whether or not Badrick makes it to the next round, he will soldier on with his bid for adoption. He stays positive.

“I believe Thea from Prosper Portland has been supportive, and the community has been fabulous,” says Badrick. “We’re right on the edge of having a signed deal, and [then] we can move forward to get a contract of doing the work.”