If you’re sending a submission, include all details that apply: individuals’ names, details of the milestone and a contact name and phone number. If you have photos, send them. The submission deadline for the January issue is Saturday, Dec. 15. E-mail editor@midcountymemo.com or mail submissions to 3510 N.E. 134th Ave., Portland, OR 97230. Call 503-287-8904. 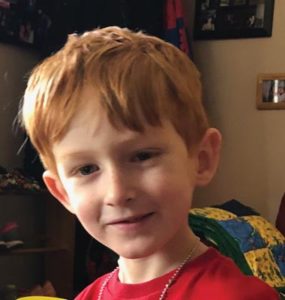 Parkrose Middle School has adopted five-year-old Owen as its Sparrow. Students will establish relationships with Owen and fundraise in support of him.
COURTESY LAURA QUEEN

Owen is a strong, brave five-year-old who loves running, climbing and superheroes. He loves to play video games and swim, and he is always on the go.

When Owen was just 18 months old, his mom noticed that something wasn’t right. Although he was meeting all his milestones, his balance seemed off, and he was having some difficulties walking. She grew more concerned when he was falling up to 30 times a day. Doctors believed that they just needed to wait and see if things improved. However, his mom knew a second opinion was needed.

Cognitive tests showed there was no neurological damage. After seeing a specialist and a few blood tests were done, Owen was diagnosed with a rare disease called ataxia-telangiectasia (A-T).

A-T is genetic disorder that causes incoordination of many motor functions, including speech, eye movement and both gross and fine motor activities. Kids with A-T typically have immune system problems and are at a high rate for cancer. There is no treatment known to slow or stop the progression of the disease. He will simply have to take each hurdle as it comes. Owen’s life will be full of therapies to help support him and his struggles. He will most likely be in a wheelchair by the age of 10.

Just this last June, Owen developed strep throat, and his tonsils became inflamed, followed by a severe infection causing blisters on his hands, feet, and mouth. Despite the risks involved with surgery, doctors needed to remove the tonsils and biopsy them. A few weeks after surgery, Owen’s mom noticed a lump on the side of his neck and grew concerned, knowing A-T kids were at a higher risk for cancer. Four weeks after surgery, the diagnosis was official: Owen had non-Hodgkin’s lymphoma. His treatments began the next day.

With Owen’s treatment protocol, he was unable to start kindergarten, and due to his high risk for infection he has been allowed only minimal contact with others. He will need multiple rounds of chemotherapy and will not be able to undergo radiation therapy due to his A-T and his inability to regenerate new cells.

Owen has been adopted as a Sparrow by Parkrose Middle School. Sparrow Clubs empower youth to be compassionate and do great things in their community. Students will work hard to not only love and support Owen but also raise money for him through sponsored community service and fundraising.