Curves owner to sell and retire for good 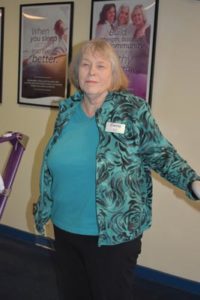 Karen Hume, a Curves member since 2006, was a retiree from the City of Portland when she decided to buy the franchise in 2012. Currently, at more than 200 members, Hume is looking to sell the business.
STAFF/2018

When retiree Nancy Hughes realized something wasn’t right with her arm, she went to the doctor. At the hospital, she was given three options: she could undergo a complicated shoulder surgery, she could try jolting increments of physical therapy, or she could “do it herself.”

Hughes went her own way.

“I’m that person,” says Hughes. “I chose to do it myself. I went directly from the doctor to Curves. And in four months, my arm was just fine.”

Curves, 10634 N.E. Halsey St., is a gym, and a small one at that: it hosts about 200 members. However, its members—all female, with the majority in their seventies—are more close-knit than most church congregations. Curves is not concerned with its members losing weight or getting ripped. Its primary motivation is to instill in women the community support they need to survive—and thrive.

From a macro standpoint, women are persuaded to join gyms like Curves. Federal health insurance programs, such as Medicare, include programs that will pay for Curves memberships in full. Many Curves members aren’t paying a penny out of pocket.

According to an article from The Hill from this summer, loneliness is a growing public health crisis in the United States. For example, our risk of clinical dementia increases by 64 percent without human contact. A quiet social life can also increase the possibility of mobility loss or functional decline.

Either way, Curves comes with unique perks for its target population.

“People come in and say, ‘I didn’t think Curves would help, but now I can do things I couldn’t do before, like walk my dog,’” says Curves’ owner Karen Hume. “Some ladies come in here because their doctors tell them they’re borderline diabetic, and now they don’t have to take their medications because they come here. Many friendships have formed; you can chat with people as you go along. That’s the community part of Curves. We have a lady who’s going to New Zealand soon who’s in here now because she wants to take walking tours.”

Hume says Curves owes its vibrant, older population to “the demographic that happens to be in the area.” She argues that Curves helps retired people from feeling “retired.”

For sale
A Curves member since 2006, Hume purchased the business with her husband in 2012 on a whim. She had heard rumors that its then-owner was putting Curves on the market. Hume approached him with an offer. Hume recognized Curves as a diamond in the rough, something precious that ought to be preserved.

Since Hume assumed leadership, Curves has blossomed. It has recently added yoga, boxing, cardio and balance and stretch classes for all levels of fitness.

Curves is on the market once again—but this time around, Hume hasn’t received the same kind of interest she herself exerted six years ago.

This is troubling, as Hume is hoping to sell by the end of the year. Curves once supplied women with a multitude of locations around Portland. As of Nov. 30, the Halsey location is the last gym standing. Hume’s location has already absorbed scattered populations of two shuttered sister sites, including one that was at Lloyd Center.

“I’m anxious,” says Hume, describing her decision to sell. “I was retired once after 32 years working with the City of Portland, and this will be my last retirement. There are a lot of things I want to do; this is a full-time-plus job for me.”

Hume worries that even if Curves sells, it won’t fall into the right hands. The community aspect of Curves must be maintained. “I really believe in the whole concept of giving a woman a full-body workout without spending an hour and a half at the gym, so you can pencil ‘working out’ in as a part of your day like an errand. It’s just thirty minutes. I want someone who will come in and view these ladies as clients you’re invested in, not just women who work out and leave.” 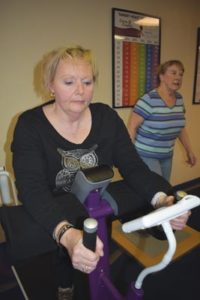 Curves, the Gateway fitness studio on Northeast Halsey Street, is up for sale. Owner Karen Hume, who purchased the business in 2012, is looking to sell the franchise.
Members Debbi Hudson, foreground, and Dale Matthews get their 30-minute workout in.
STAFF/2018

Community lifeline
Hume’s welcoming approach has had far-reaching effects. “It’s hard to put in just a few words what Curves means to me. I’ve been a member for seven years, and I worked at Curves for three of those years,” says Rhonda Piasecki. “The importance of maintaining muscles and strength and balance as we age is a well-known fact. Curves makes it so easy for women to work out in only thirty minutes. The machines are hydraulic; there’s no weights to fuss with and belonging to an exclusive woman-only gym makes women feel more comfortable and safer.”

Piasecki adds that for an older population, everyday mishaps (such as falling) can result in dire consequences. However, she’s seen Curves work miracles. “The speed at which women recover from a fall or from knee or hip replacement surgery here is amazing!”

Some Curves members have relied on the gym for its social networking properties, even after making a big move later in life. “I started in Salem, Oregon, and eventually through relocation ended up in Portland,” says Robin Kisor, who puts herself in the “middle range” of Curves’ average-aged customer. “I have another gym membership that’s a chain membership, but it does not give me what I get out of Curves. At Curves, I come in, get my routine in and enjoy the company of a diverse group of women. No one judges. It is so pleasurable to have discussions with women older and younger than me about issues that affect us. I encourage the younger girls and get encouragement for living from the older women.”

Kisor believes attending a smaller gym isn’t just good for community building; it’s better for women, too. “What I find with all of the cheaper monthly access gyms is a very young clientele and all the social issues younger people deal with. We don’t have those issues [at Curves], and the female support is amazing. We were the #MeToo movement before it was popular.”

Whether or not Hume sells Curves, or it closes its doors, its impacts will continue to be felt.

“I met my hairdresser here, and she’s also my friend,” says Hume. “The ladies are going to lunch today, and I normally join them. The end of our contract is in March of next year, and after that I want to come back as a member.”

If you have any interest in purchasing Curves or learning more about its mission and services, contact Karen Hume at curvesgateway@gmail.com or visit their website at curves.com/locations/portland-or-northeast.