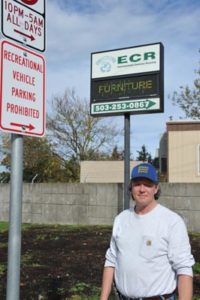 In 2016, the owners of Environmentally Conscious Recycling (ECR) began having issues when a plethora of RVs began parking along Northeast San Rafael Street between 122nd and 124th avenues in front of its business for extended periods of time. In 2018, the city installed No Overnight and No RV Parking signs while ECR teamed with its neighbor Portland Christian Jr./Sr. High School, other businesses and a church on the street to form a safety council. ECR’s Brendan Jamieson shows off the sign that calmed Northeast San Rafael Street.
STAFF/2018

A recycling center and a Christian high school might not have much in common, but when the street they share is threatened, they are a force to be reckoned with. Environmentally Conscious Recycling, 12409 N.E. San Rafael St., and Portland Christian Jr./Sr. High School, 12425 N.E. San Rafael St., are two members of an unlikely coalition of businesses with participants representing the area from 122nd to 127th avenues on Northeast San Rafael Street.

In January, a business watch was formed to tackle the issue of illegal RV camping. The following ten months have proven fruitful.

Since at least 2016, a surplus of RVs has been occupying San Rafael Street, which in and of itself is not illegal. Their actions, however, have been. The cars act as tents for a suspected homeless population, overstaying their welcome by parking overnight or for multiple days. Campers have been witnessed polluting the streets with trash and needles. Some locals have avoided the area, thus affecting both businesses and, perhaps more concerningly, schoolchildren.

“Students were forced to cross San Rafael Street at our driveway toward WinCo in order to use businesses and public transportation rather than walk by the vehicles—and those living in them—parked along that street,” says Sherri James, Portland Christian Jr./Sr. High School principal. “There were several observations and interactions with those living among the vehicles that prompted the school to become increasingly concerned. We felt that the behaviors of the population who were parking/living in vehicles in the school zone were not safe for our students.”

James, who has worked at Portland Christian Schools (PCS) for seven years, says the campers have been on her mind for the last two years.

“We first noticed there was a serious issue with illegal RV parking in our area in 2016,” says James. “The issues included long-term RV parking, broken-down vehicles, garbage and trash accumulating, drug paraphernalia, human waste and unsafe behaviors from those living among the vehicles.”

Businesses had been lodging complaints, but it wasn’t until 2018 that they decided the power might come from within. A group, including several stores—many in the San Rafael Shopping Center, such as WinCo Foods—mixed with the Oregon Central Korean Seventh-Day Adventist Church, 12707 N.E. San Rafael St., and Russell Neighborhood Association members joined forces in search of a solution. James coined the group’s official title, the San Rafael Safety Council (SRSC). “It’s sort of a unique thing,” says Brendan Jamieson from Environmentally Conscious Recycling. “It’s a hybrid business and neighborhood watch because we have businesses and schools and a church. With the participation of the neighborhood association board members, we have that input, too.”

Years in the making
Jamieson claims the SRSC was a long time coming. Environmentally Conscious Recycling had lodged many reports to the Portland Bureau of Transportation’s (PBOT’S) parking enforcement officers. Jamieson’s foreman from Environmentally Conscious Recycling had been “reporting things every day on the PDX Reporter App,” according to Jamieson. The PDX Reporter App, accessible from most electronic devices, allows denizens to “report and request service calls to city assets and infrastructure,” according to PBOT website.

Following a report, the city sends a parking officer out to remove campers. However, this only occurs once every two weeks. The campers caught on to the cycle. “We found out later that this is a hotspot and the city knew it. There were so many complaints coming in. Despite the continued complaints, the cycle of biweekly enforcement was not solving the problem,” says Jamieson, who notes that WinCo had reported the most RVs, as it’s open 24 hours. “The campers would leave for the night and be back the next morning.”

Indeed, Jamieson was not alone in contacting PBOT. This became evident at the SRSC’s first official meeting in early February. On the day of, PBOT had beaten the SRSC to the punch. They had installed anti-RV camping signs along San Rafael Street and the driveways of Environmentally Conscious Recycling and WinCo in the days leading up to the gathering. “It was a coincidence,” says Jamieson. “We didn’t know these RV signs were going up, and we had already scheduled a meeting to talk about how to get them. I was even told they might take some time to get.”

It looked like the SRSC was winning before heading into battle. PCS had also been privy to filing complaints and was elated at the news. “After a coordinated effort of complaints and reporting to the city for two years regarding the RV parking issues, the city responded with putting up No RV Parking signs along San Rafael Street in February 2018,” says James.

SRSC would then stumble upon additional serendipity. The group discovered an open call from PBOT to apply for an “Area Parking Permit Zone Pilot Program.” They discovered the application last minute but were pleased to find that the deadline had been extended.

The program was the result of a Jan. 24 request from PBOT to City Council to offer high-demand areas additional options, such as limiting the total number of parking permits (per address, in some cases), charging a permit surcharge and implementing a parking permit zone. The problem for SRSC was that in PBOT’s eye, they don’t represent a zone with high enough demand. Eight total zones applied, and only two—North Mississippi in the Boise neighborhood and Southeast Hawthorne in the Sunnyside/Richmond neighborhoods—were selected for the pilot program.

However, SRSC’s request cemented them on PBOT’s watchlist. “We found out that we were denied for the program,” recalls James. “Soon after in April, safety council was contacted by a PBOT representative regarding our efforts, which caught their attention. We were offered the opportunity to request signage for parking. We now have signs along San Rafael and south from the school on 122nd that restrict general parking times and RV parking. Our street and neighborhood are now included in regular PBOT and police patrols for parking enforcement.”

Dual messages on signs
Bolstered by several strokes of luck, SRSC worked with PBOT to brainstorm a lasting solution. Even the pilot program SRSC had applied for and lost out on only lasts a year—a trial period. In the end, two signs were better than one. “At the time they determined we were not chosen, they let us know that parking control would talk to us about parking control strategies. These turned out to be signage,” says Jamieson. “We talked about different types of signs, but what it came down to were signs preventing both RV parking and overnight parking. I haven’t seen these two signs go up together anywhere else.”

No overnight parking signs debuted in August. Since the introduction of the dual signage, a weight has been lifted. “You’re talking about schoolkids,” says Jamieson. “If anyone is benefitting from this, there’s so much coming from the school. It’s used for so many things. It has its own sporting events, and they have that great track and field out there. Before [the signs], the RVs would take up the spots and were intimidating, and now the community is back and engaged. It’s really nice to see that.”

PCS couldn’t agree more. “The efforts of [the SRSC] have greatly impacted the livability and safety of the neighborhood that our school resides in. It is now more of a rare occasion when one of our members of SRSC will need to approach an illegally parked vehicle for a request to move or to report it to PBOT for violation. With vigilance and coordination, our community came together to improve an issue that was of great concern.”

Despite the successes, the SRSC is still finding its footing. Individually and collectively, the neighborhood is moving forward with other initiatives.

Portland Christian Schools want more from PBOT
James says that PCS has made a multi-year effort to sway PBOT to install a crosswalk on San Rafael Street near the school’s driveway, in addition to public transportation stops on both the north and south side of the street. “We have students that take TriMet buses to get to school each day, as we do not provide transportation to our schools,” says Jamieson. “The last attempt to request a crosswalk was made in July 2016. A year later, we still had no resolution and have since been denied because PBOT stated that pedestrians should use the crosswalk on 122nd Avenue and San Rafael Street. Since this denial, we have been told that a School Zone flashing light has been designated for the street, but it has yet to be installed, [nor have] any definite estimations for installation [been] provided.”

As for SRSC itself, it’s tentatively planning its first meeting since August this month.

“The signs were phase one, but we might want more signs. We still have a couple more steps to go to really make it clear that this is a neighborhood that this is not a place for camping,” says Jamieson. He adds that SRSC, and the larger community, is bigger than the signs.

“Our future efforts as a safety council will hopefully include shared reporting of crime or concerns for safety that take place on our properties that impact the community around us. We have good relations with the police and PBOT and look forward to continuing this coordinated effort in making our neighborhood a safer place to live and work,” says James.