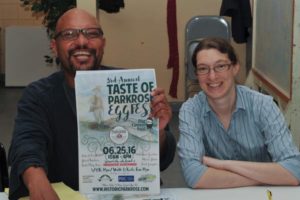 Three and a half years ago, Mingus Mapps was not familiar with Parkrose. Then he took a position that would make him one of the neighborhood’s most influential voices. In October, Mapps bid adieu to his position as executive director of Historic Parkrose, a nonprofit that mediates between community wants and needs through intimate action items, such as its altruistic allocation of storefront improvement grants and community organizing.

“I live off Burnside in inner southeast,” says Mapps, who received his undergraduate degree from Reed College and has always had family in the area, despite being born in San Francisco. “If I knew Parkrose, it was probably because of the hardware store.”

While some blame city-run organizations as walking around with their hands in their pockets, Mapps’ fingers were spread out over many open cookie jars in Parkrose. There was no aura of “business as usual.” In his time with Historic Parkrose, Mapps helmed a stuffed portfolio of community dialogues and action plans.

When he wasn’t vetting a grocery store for the area in 2015 before there was one, he oversaw the rise of several towering neighborhood staples, such as the Taste of Parkrose and Trunk or Treat events.

“The things I’m really excited about and am proud of include Taste [of Parkrose], obviously. That’s become such a special and signature event for the neighborhood,” says Mapps, adding that when he joined Historic Parkrose, Taste of Parkrose resembled a “flea market in a parking lot.” It is now Parkrose’s most attended annual outing, a feat achieved during his tenure.

“There are few jobs in Portland like this where you’re promoting applicable economic development, serving a neighborhood that’s been underserved, trying to invent ways to make Portland work better,” says Mapps. “And the people have been great.”

Shortly after Mapps entered the fray, Kate Coenen was hired as Historic Parkrose’s economic opportunity coordinator. She and Mapps would end up working in close quarters for the next three years; Historic Parkrose is a two-person office. Still, they managed to spin their work partnership into a real-life friendship.

Coenen fondly recalls attending Trunk or Treat with Mapps in 2015. It was one of her first big community outings, and she bonded with Mapps under the shelter of their tent that year with the pouring rain. While the two have worked in unison as Parkrose’s eyes and ears, they’ve also prioritized watching each other’s backs.

“It’s been an honor to work with Mingus for over three years, and I wish him the best of luck in his new position. I look forward to working with whoever our new executive director will be, and I think that this will be a great opportunity to move Historic Parkrose forward,” says Coenen.

Historic Parkrose itself is a fledgling: it has only been around for about five years. Since arriving mid-decade––yes, it really is almost 2020––it’s also seen Samantha Montanaro come aboard as president of Historic Parkrose.

“Mingus has this way about him that is warm, diplomatic and caring,” says Montanaro. “He has truly been a staple of Historic Parkrose, and he will be dearly missed. The Historic Parkrose Board wishes Mingus nothing but success in his new position, where we know our paths will continue to cross.”

“Under Mingus’ leadership, Historic Parkrose approved more than $80,000 in district improvement grants in 2018 for projects that included improvements at El Sombrero Mexican Cocina; Parkrose Chiropractic; Bé Vân Sports Bar; Swell, a Parkrose cannabis extraction company; and O’Dear, the new family-friendly brew pub opening soon. 2018 was a record year for awarding grants since our founding,” says Montanaro. “We had a record turnout for Taste of Parkrose, and we motivated a community policing initiative that has decreased crime in Parkrose significantly.”

Asked what he would be doing on his last day at the office, Mapps stated there would be no going away party. Considering the logistics, there aren’t enough people for a party, but Mapps’ exit could change that. In his place, two new people will be hired. Thus, the office of two will grow into an office of three.

Mapps’ position of executive director is expected to be filled by November, with the second round of interviews having taken place in late October.

“When I arrived … Historic Parkrose was in this nebulous zone where we were between a nonprofit and a volunteer group, but we’ve matured into a strong nonprofit. We’re staffed up, and we’ve figured out what our model is and what we actually do. It seems like a good time to pass the baton,” says Mapps.

Mapps’ departure underscores the evident evolution of a small but hearty Parkrose Business District in a miniscule time frame. As he packs his things and heads off to his new gig within the City of Portland’s Office of Community & Civic Life, supervising a team of crime prevention coordinators, he offers hopeful parting words.

“It was a unique opportunity that came up, and the neighborhood is at an interesting transition point. Development building and renovating properties, that really took off this year, and you can tell that those will continue. I expect that Historic Parkrose will amp up our efforts and build and rebuild in the neighborhood and become really good at doing that,” adds Mapps. “The things that happen next will be really exciting.”

What is Historic Parkrose?

Historic Parkrose is one of eight Prosper Portland—formerly the Portland Development Commission—Neighborhood Prosperity Initiative (NPI) areas throughout the north and east parts of the city. Four NPI areas are east of 82nd Avenue; the other four are St. Johns, Cully, Alberta Street and 42nd Avenue. The eight districts are in areas “experiencing lagging commercial investments, with a higher than city-wide poverty rate and a higher concentration of minority-owned or neighborhood-serving businesses,” according to Prosper Portland’s website.

Prosper Portland funds the NPI with tax-increment financing from property taxes in the areas. NPI areas are, essentially, mini-urban renewal districts, but local volunteers are given control of where and how the money is spent. NPIs are separate entities from local business associations.

Historic Parkrose’s target area is from 99th to 112nd avenues along Northeast Sandy Boulevard. Historic Parkrose offers storefront improvement grants, technical assistance and support to businesses in its target area, and it is “committed to the growth and preservation of the Historic Parkrose Business District and its surrounding neighborhood.” This includes not only the target area but also one block south to Wygant Street, as well as all the way to Northeast 122nd Avenue.

Want to be a Historic Parkrose volunteer? Visit historicparkrose.com for more information or call 503-964-7807.