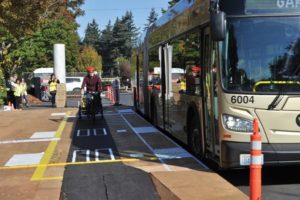 TriMet built an 18-foot-wide plywood mock-up of the 30 stations proposed for the stretch of Southeast Division Street between 82nd Avenue and Gresham to test their efficiency as part of the Division Transit Project.
STAFF/2018

Members of the media and targeted focus groups got a preview of a key part of the Division Transit Project on the mild morning of Oct. 18 at TriMet’s East 181st Avenue Park and Ride in Gresham. A C-TRAN bus (borrowed from Vancouver) like the ones that will be part of the project repeatedly pulled up and departed from a plywood mockup of the stations proposed for the stretch of Southeast Division Street between 82nd Avenue and Gresham.

The demonstration, besides giving interested parties a chance to see some of the project’s innovation, gave planners the opportunity to observe interactions between the bus riders, bicyclists and pedestrians who will share the station and the road, as well as to receive feedback from the bus operator. The station’s platform is 18 feet wide and slightly raised above street level. The bike lane crosses the platform close to its outer edge, separated from passersby and waiting passengers by a yellow line.

“The expectation is that when a bus is docked at the platform, bikes will stop for pedestrians crossing the walk, like they would do anywhere else,” Jesse Stemmler, urban design lead for the project, told onlookers. Public comments have already raised doubts about bicyclists’ attentiveness, which will be crucial for the safety of bus passengers.

The model is based on current practice in Toronto and various European cities. Planners abandoned their idea of placing the bus rapid transit stops on islands separated from the sidewalk by the bike lane due to space constraints. The new model will also increase safety by avoiding bus incursions into the bike lane.

“We see this station design as the future of many stations in Portland,” said Portland Bureau of Transportation spokesman Dylan Rivera, who was also on hand for the event. He predicted the demonstration would yield genuine insights, noting that trial pedestrian-bicyclist interactions on Tilikum Crossing produced unexpected results.

Division Street is a high-crash corridor, Rivera added. The city has already spent $3 million on safety upgrades along the street, and another $7 million has been programmed for upgrades in 2019 and 2020, as the city works in close conjunction with TriMet. According to The Oregonian, those upgrades will include the creation of a raised median, narrower lanes to slow the flow of traffic, 13 new pedestrian crossings and buffered bike lanes.

Thirty transit stations will be built for the project—one every quarter mile—and they will be served by 60-foot-long articulated buses that will be 20 feet longer and have 50 percent greater passenger capacity than other TriMet buses. Thirty-two of the new buses will cost about $1 million each. They will have three doors for entering or exiting, with mobility devices using the first door and bicyclists using the last door to access bike racks inside the bus. This will help increase performance along the route, as will “transit priority” traffic signals along the 15-mile route from downtown Portland to Gresham.

Another $60 million of the $175 million total price tag for the project will go for construction, according to Jeff Moreland, president of Raimore Construction, the lead contractor of the project and builder of the model station. Raimore, a member of the Disadvantaged Business Enterprise Program, has grown in 20 years from a “small trucking outfit.” It has worked with TriMet on all its major projects since the construction of the Interstate MAX, Moreland observed.

The construction price tag is modest for a public works project, Stemmler told the Mid-county Memo, and with the construction scheduled to start late next year and finish in 2022, it is also fast. That is because of the relatively light nature of the work: building stations, widening the street and altering signals and lanes. Half of the funding for the project is expected to come from the federal government, although no federal funding has been approved yet. The city of Portland has set aside $17.7 million for it so far, and the city of Gresham has contributed $500,000.

Despite the funding gaps, planning is in full swing. The project is at the 60 percent design completion stage, and as Stemmler said, “I can’t even tell you the number of committees” that have had a hand in it. Footage of the C-TRAN bus docking at the model station can be seen on the Mid-county Memo Facebook page at facebook.com/midcountymemo/videos/302888750437839/. In it, Raimore Construction’s Jeff Moreland is seen exiting through the center door and walking toward the camera.