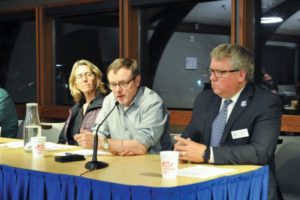 By all measures, the initiative to transfer power over the whole of 82nd Avenue from the state of Oregon to the city of Portland has seen unprecedented success in 2018. Everybody is on the same page, but no ending has yet been written.

According to Keny-Guyer, the city is not able to take 82nd until the street is “move-in ready.” This means an excess of roadwork with no one pulling out a checkbook. “What money we’re talking about now, we’re not really sure, but maybe somewhere in the vicinity of $150 million to properly bring it up to a place where the city will accept it. We might have a little variety of what that figure could be,” says Keny-Guyer.

The most telling takeaway from the panel discussion was that all these representatives were present and united in a common interest. Eight months ago, not everybody’s position was so clear.

As previously reported (“Pols send letter to ODOT about 82nd Avenue jurisdiction change,” MCM May 2018), it wasn’t until March, when ODOT revealed that it did not plan on prioritizing 82nd Avenue in its 2018 Regional Transportation Plan, that Dembrow made his support for the jurisdictional transfer known. He co-signed a letter addressed to the Oregon Transportation Commission, the city of Portland and the Metro Council bemoaning 82nd Avenue’s absence from the Plan. In April, a follow-up letter spearheaded by Dembrow and Keny-Guyer was sent to ODOT, PBOT and Mayor Ted Wheeler arguing for an expedited jurisdictional transfer of 82nd Avenue. Since spring, all major players—ODOT, which currently owns the “orphan highway”; PBOT, which would take the reins following a transfer; and local and state representatives—are in favor of the transfer. 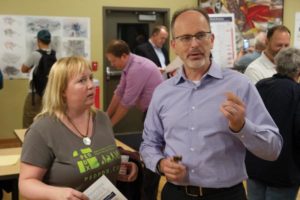 Brian Wong, one of the founders of the all-volunteer 82nd Avenue Improvement Coalition, chats with Eve Nilenders, who lives near 82nd Avenue.
STAFF/2018

“If you go back to the 1930s, the vision was much different. It was, ‘How to get my farm products to market and how do we get regional traffic through here?’ This road is much different than it was back then with literally nothing around it, and now we have Interstate 205, which has taken the bulk of regional traffic, statewide traffic and freight traffic, which are really the things you think about when you think about the function of a state highway,” said Windsheimer, presenting at the panel discussion.

Brian Wong, one of the founders of the all-volunteer 82nd Avenue Improvement Coalition, also spoke at the event. The Coalition, like the public, had unanswered questions walking into the room. Wong lives almost exactly one mile from the southeast PCC campus and one block from 82nd Avenue, which he can see out his bedroom window. “I actually felt pretty good about it,” says Wong, discussing the meeting. “I think that the transit agencies sort of felt the urgency and the desire of the community and knew that something needed to be done. I also felt good that the transit agencies were on the same page for once. There seems to be consensus that the transfer needs to occur. This is the first time we’ve heard this. I’m hoping it can happen sooner rather than later.”

Financial hurdles
Unfortunately for Wong, later looks more likely for now. When he first got involved with politicizing 82nd Avenue, he didn’t think the highway needed a transfer, but he did think it needed a lot of money. Now he believes it needs both. With a transfer on the table, further fiscal realities are sinking in. “Money is the huge problem,” says Wong. “From ODOT’s standpoint, roads like 82nd are low priority, so money will go to other roads before 82nd. Money will have to be dedicated to 82nd Avenue. On the other hand, the road is not owned by the city, so the city is not putting money into it. So where do we find the money?”

A major improvement concern surrounding 82nd Avenue lies in the condition of its pavement.

“It doesn’t make sense for us to go and pave 11-foot-wide lanes, so we can turn it over to the state,” says Keny-Guyer, noting that a jurisdictional transfer might have to occur before some improvements can be made—a real catch-22. But PBOT is unlikely to fund a road it doesn’t own.

Keny-Guyer has been studying other “orphan highways” around the state, which puts her in line with the Portland Metro Council. “[Portland Metro] is coming up with a process right now to look at orphan highways inside the Metro boundaries and say, ‘What should be the priorities? Let’s tackle this,’” says Keny-Guyer. She mentions this process could take 30 years.

During the panel discussion, Gilles added that funding sources, as well as items, form the main questions. “There are two fundamental issues here: there’s the actual pavement condition and what the cost is to bring that up to a good level and what the ongoing pavement cost would be, and then there’s the larger issue of how the road fits into the community or neighborhoods.”

Moreover, without a cohesive project list, an exact estimate is unattainable.

Long-term solutions
In September, Keny-Guyer testified in front of the Oregon House Committee on Transportation Policy. She argued that in 2019, the State House should start funding an assessment and prioritization process across the state for orphan highways. From there, outfits like the Metro Council can rank the roads, like 82nd Avenue, into “tiers” for prioritization, according to Keny-Guyer. She believes 82nd Avenue would come out at the top of the list.

Keny-Guyer is submitting legislation that, if passed, would create statewide assessment and some funding toward roadways poised for transfer. Her legislation asks that each region in Oregon, such as the Portland Metro Council, perform an evaluation of candidates for jurisdictional transfers and that one percent of Statewide Transportation Improvement funds enter a specific Oregon Jurisdictional Transfer Fund. This fund can work toward instigating transfers. If and when statutorily directed transportation investments come in under budget, any leftover money could enter the Oregon Jurisdictional Transfer Fund.

Wong agrees with the bill, but he claims Keny-Guyer’s meeting in Salem showcased a discrepancy. “During the presentation to the House Committee on Transportation Policy, McGregor Lynde, the interim ODOT Highway Division administrator, stated orphan highways are at the bottom of the priority list for maintenance. However, the same roadways, under local control, are the top priority for maintenance.”

“If we get the assessment of 82nd done now, we can say when the Bond passes that we’ve already done the assessment, so here’s our project list and here’s our cost,” says Wong, arguing that this is the quickest construction route.

Still, a jurisdictional transfer also calls for a broader vision for the future of 82nd Avenue, be it five or 20 years from now. The 82nd Avenue Improvement Coalition’s immediate goals include mediating between both jurisdictions, ODOT and PBOT, as well as supporting Keny-Guyer’s legislation.

“We need to talk about zoning issues, redevelopment opportunities and a long-term function,” says Wong. “82nd used to be a dirt path, and the community is much different than it was in the 1930s. The next step is setting priorities.”

At the end of the day, Wong’s real objective for 82nd is simple: he wants to see a street, rather than a highway, that caters to people over cars.

Get the latest updates from the 82nd Avenue Improvement Coalition via their Facebook page at facebook.com/82ndAvenue/.