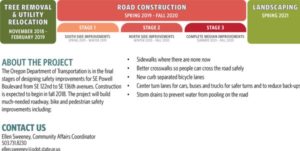 The Oregon Department of Transportation is in the final stages of designing safety improvements for Southeast Powell Boulevard from Southeast 122nd to 136th avenues. The project will build much-needed roadway, bike and pedestrian safety improvements. Construction is expected to begin in fall 2018.
COURTESY OREGON DEPARTMENT OF TRANSPORTATION

Few Oregon streets are set for a transformation more dramatic than Outer Powell Boulevard, which spans from the area east of the I-205 to just east of Southeast 174th Avenue. For starters, when all is said and done, it will no longer belong to the state.

As previously reported (“Outer Powell Transportation Safety Project still on track, despite radio silence,” MCM May 2018), the Oregon legislature passed House Bill 2017, which paves the way for a jurisdictional transfer of Outer Powell Boulevard from the state of Oregon to the city of Portland.

There’s still no word on a set deadline for when the transfer will occur, but before the baton is passed, the Oregon Department of Transportation (ODOT) must complete the Outer Powell Transportation Safety Project. The project has pedestrian safety on the mind, meaning new bike lanes and pedestrian improvements such as sidewalks, crosswalks and improved street lighting. It outlines safety improvements for Outer Powell from Southeast 122nd to Southeast 136th avenues.

Since the project’s last open house in May 2017, ODOT has conducted little public outreach throughout the project’s design phase. That is, until last month, when final designs were unleashed to east Portland residents at a Sept. 27 open house held at the Ron Russell Middle School Commons, 3955 S.E. 112th Ave.

At the event, the specifics came to light. Spectators could see that sidewalks will be implemented from top to bottom. Additionally, improved crossings with flashing beacons will rise around Powell Boulevard and Southeast 125th, 130th, and between 132nd and 134th avenues. Mid-block crossings are expected from the I-205 to Southeast 122nd Avenue and later from Southeast 136th Avenue to east of 174th Avenue. Center turn lanes will also appear throughout the corridor.

Final designs were mostly predictable, but there was one standout twist: street parking is on the chopping block. A reduction in parking will complement the introduction of curb-separated bike lanes.

“Curb-separated bike lanes mean there will be physical separation between where bikes are and travel lanes wherever possible. There will be gaps to allow for driveway access throughout the corridor. All parking along Powell will be removed as it is part of the ODOT right-of-way and will be needed for the addition of sidewalks,” says Ellen Sweeney, ODOT’s community affairs coordinator.

Parking won’t disappear tomorrow. As of now, there’s no contractor. “When the contractor comes on board, they will develop a schedule and sequence the work. We will continue to keep the public apprised of the schedule activities and impacts. For now, we don’t have a specific time frame for when all parking on the corridor will be removed.”

The Outer Powell Transportation Safety Project is not ODOT’s swan song for Outer Powell. Reconstructing the segment of Powell Boulevard from 122nd through 136th avenues is only the “first phase of our work on Outer Powell,” according to Sweeney. After that, ODOT will “design and construct I-205 to Southeast 122nd and Southeast 136th to just east of Southeast 174th [avenues]. The jurisdictional transfer will happen after the full Outer Powell corridor has been constructed.”

While it’s unlikely that ODOT is open to modifying its project designs going forward, the door is open. “The public can learn about the upcoming tree removal and utility relocation activities and impacts and ask any other questions they may have about this project and the future segments of Outer Powell,” says Sweeney.

Learn more about the Outer Powell Transportation Safety Project at outerpowellsafety.org. If you have questions or concerns, contact Ellen Sweeney by phone at 503-731-8230 or by e-mail at ellen.sweeney@odot.state.or.us.