If you’re sending a submission, include all details that apply: individuals’ names, details of the milestone and a contact name and phone number. If you have photos, send them. The submission deadline for the November issue is Monday, Oct. 15. For best results, e-mail editor@midcountymemo.com, mail submissions to 3510 N.E. 134th Ave., Portland, OR 97230 or call 503-287-8904. 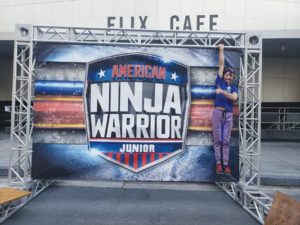 A ninja warrior among us
Caiden Madzelan, grandson of longtime community residents Barbara and the late Dave “Can Man” Luce, earned a spot on “American Ninja Warrior Junior. Caiden traveled to Los Angeles in July to compete against 63 other 13-and 14-year-olds on a side-by-side American Ninja Warrior course.

Matt Luce, Caiden’s dad, says “Caiden has been doing Ninja Warrior-type competitions for two years now, and in 2017 [he] finished fifth in the nation in one of the ninja leagues that has sprouted up due to the popularity of the show.”

The show debuts Saturday, Oct. 13 at 7 p.m. on the Universal Kids Network and will run for 20 episodes. You’ll have to watch from the beginning to see Caiden, as his family has not been informed in which episode he will appear.

Check out vote411.org. Shortly after Oct. 1, vote411.org will go live with nonpartisan information on candidates and measures that will appear on your ballot. Want a paper Voter’s Guide with all Oregon and Multnomah County nonpartisan voter information? They will be available in English and Spanish in early October at League of Women Voters Election Forums at all branches of the Multnomah County Library, Multnomah County Elections Office, New Seasons, college/university and community college campuses, Gresham City Hall and other locations.

Oct. 16 is the last day to register to vote. Oct. 17 ballots are mailed to voters. Change of address on existing Oregon voter registrations can be corrected up to election day.