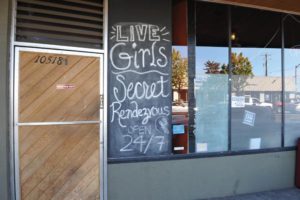 As they shepherded their kids back to school in August, Parkrose parents discovered more than crumpled Office Depot receipts along one of Portland Bureau of Transportation’s-designated “Safe Routes to School.” On Aug. 1, a lingerie modeling shop called Secret Rendezvous opened for business in the former location of Deanz Greenz at 10518b N.E. Sandy Blvd. While parents may have made their peace with the smell of skunk, heart rates dropped at the sight of scantily clad women propositioning pedestrians. In its first two months, it has assembled several enemies.

Neighboring businesses have a lot to say on the matter, questioning the store’s true motivations surrounding its merchandise. Some ask: Is Secret Rendezvous selling lingerie or the women wearing it?

Upset businesses
Rick Chappelle, the owner of motorcycle repair shop Moto Guzzi, works three doors down. He believes Secret Rendezvous makes good on one promise––it has a secret. Asked what he’s noticed outside Secret Rendezvous since August, he says, “I mean, there are more [sex workers]. I think it’s kind of a gathering spot, they have those chairs out there, and those girls will be standing around.”

Also suspicious of Secret Rendezvous is Lily Nguyen, who owns Lily’s Beauty Salon. Nguyen’s salon and Secret Rendezvous are next-door neighbors. “I don’t pay much attention, honestly. They have some customers I guess, but they’re in and out. Nighttime is different. During the day, some people walk in and walk out. Sometimes you see the sign on, and sometimes you see the sign off,” says Nguyen.

While both of Secret Rendezvous’ neighbors appear candid over the possibility of suspicious and potentially illegal activities, neither owners have confronted the mysterious women who have taken over their street. Tony Kassapakis, the owner of Tony’s Tavern, which sits between Lily’s and Moto Guzzi, has tackled Secret Rendezvous head-on. And there have been repercussions.

“Our night manager Heidi went over and started yelling and called the cops and made a big, huge deal out of it. And now they’re [Secret Rendezvous] upset with her. Now they’re harassing her at night, and the cops aren’t doing anything,” explains one of Tony’s daytime bartenders, Theresa. Asked whether Tony’s Tavern had issues with Deanz Greenz, Theresa says, “We didn’t have a problem with them at all, except for parking.”

Neighborhood response
In recent years, many have stepped up in Parkrose in an effort to take down shops promoting R-rated content. Similar to Secret Rendezvous, Tush Lingerie Modeling, previously located blocks away at 4826 N.E. 105th Ave., was targeted for being positioned along a “safe route to school” (“Complaints put Parkrose lingerie shop out of business,” MCM Oct. 2017).

An active Change.org petition, mixed with the discovery of some interior construction faux pas, shut down Tush within weeks. For the record, Tush opened on Aug. 1 of the summer of 2017, which appears as another foreboding link with Secret Rendezvous. Historic Parkrose, as well as the Parkrose Neighborhood Association (PNA), were also instrumental in banding together to push Tush out of the picture. In a move reminiscent of Tush, a Change.org petition was launched by canna-activist Leah Maurer and called, bluntly, “Get ‘Secret Rendezvous’ Lingerie Modeling OUT of Parkrose.” It gained thirty signatures in one day and had close to 100 at last count.

Annette Stanhope, the president of the PNA, is no fan of Secret Rendezvous. “It’s not proven that there’s prostitution happening at that place, but many lingerie places have been caught at this, and some have not,” says Stanhope. “There are kids that walk through this area on a safe route to schools. Families walk through there to get to Grocery Outlet and the hardware store. We’re trying to get more family-friendly type businesses on Sandy, and this is not feeding into that.”

Some members of Historic Parkrose—Samantha Montanaro is the current chair—have also thrown their support behind the initiative, but a PNA meeting on Sept. 19 left some PNA members scratching their heads. The meeting was centered, in part, around the question of whether PNA should throw its support behind the Change.org initiative. In a surprise move, the attempt was unsuccessful.

“The PNA decided not to promote it. This may change, but it’s where things stand right now,” says Stanhope.

For his part, Secret Rendezvous’ owner, Dionne Allen, is standing his ground. He denies that any illegal activity is happening in or around his shop, even if the naked eye picks up other ideas.

“I’m very misunderstood,” says Allen, who is the father of a three-year-old. “None of that is going on. They do private lingerie shows. People think one thing leads to another, but it’s my business and I’m just trying to make money.”

In the meantime, some claim prostitution has been a visible issue in Parkrose since the 1970s. Whether or not Secret Rendezvous involves prostitution, it’s still an issue elsewhere in the area.

“They’re all over the place down there,” says another long-term business owner on Sandy Boulevard. “It was worse [in the 1980s] because there were more motels down here. It was bad when we first opened from the late 1985-to-1986 era.”

In terms of putting a lid on local sex workers, the key may be a broader police presence, as opposed to an online petition.

“The least I noticed it [the prostitution] was when we had the beat cops out here,” he said. “This was probably seven or eight years ago. When we had a cop walking the street here, there were zero [sex workers].”