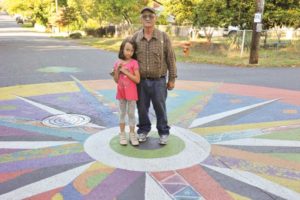 Bob Cole and his great-granddaughter Kinley pose on a street mural at the intersection of Northeast Skidmore Street and 110th Avenue. Created last summer, a depiction of a compass was chosen by the community over two alternatives because of an online poll. All three designs had the focused, circular patterns and many colors.
STAFF/2018

There’s another first in east Portland, and this one couldn’t have been done alone.

On July 21, at the intersection of Northeast 109th Avenue and Northeast Skidmore Street, the Parkrose Neighborhood Association (PNA), the Parkrose Business Association and Historic Parkrose joined forces with more than a hundred attendees, mostly neighbors, for a block party that introduced Parkrose to its first authorized street mural.

The mural is an accomplishment that brings together a rainbow of local business groups and nonprofits.

“Historic Parkrose covered the costs of the food being provided by Last Call Delivery Boyz, a catering business in the Parkrose neighborhood,” says Annette Stanhope, PNA’s chair. “The cost of paint and supplies is being covered by donations from local supporters, and donations by the Parkrose Business Association and PNA. Parkrose Hardware gave us a discount on the paint, which is a special, heavy-duty paint to be used on pavement.”

The idea for the mural was dreamt up some time ago. Roots for July’s implementation activities date back a couple years when Michelle Kimble, one of PNA’s board members, worked on the Plaza del Sol mural in Rockwood, Oregon, before Rockwood’s annual Rock the Block festival.

Stanhope adds, “[Kimble] thought it would add some art to the neighborhood.”

A depiction of a compass was chosen by the community over two alternatives as a result of an online poll. All three designs “had the following in common: a focused, circular pattern and many colors. Whichever design was chosen, we wanted to show a concept that balanced diversity and unity,” says Stanhope. “We have lots of different ethnicities and walks of life in Parkrose, but I keep hearing a common theme of people caring for where they live and wanting to know more about their neighbors. I hope that this project brings neighbors together in a positive way and is one more step towards creating a closer-knit community.”

The winning mural design arrives from Samantha Montanaro, Historic Parkrose’s board chair. “I created three designs based on hospitality, community, education and whimsy to have the community vote on. The residents of Parkrose spoke up and chose the compass!” says Montanaro. “The idea came from the simple idea that many kids walk to and from school along Skidmore Street.”

Montanaro claims she wanted to create something that was “educational but beautiful.” She’s no stranger to the desire for creative community integration.

Montanaro founded Prism House PDX, a monthly meetup group that doubles as a community art initiative. It attempts to connect those involved within the east Portland cannabis industry. Prism House PDX produced the design and managed its installation. “The compass was a natural thought. Each direction points to a landmark in Oregon––north to the Columbia River, south to Crater Lake, east to Mount Hood, and west to the Pacific Ocean. Four local artists came to paint the icons, while the community came together to decorate this beautiful mural. We are thrilled to bring more art to Parkrose.”

The mural was funded in part by a Kickstarter-like online fundraising site called YouCaring.com. Of a $3,000 goal, a total of $1,955 has been collected.

According to a post on PNA’s Facebook page, the project is the “second to be completed without the help of the City Repair Project in Portland.” The City Repair Project, in its own words, achieves “artistic and ecologically oriented placemaking through projects that honor the interconnection of human communities and the natural world.” It’s a program that relies on large swaths of volunteers.

Mingus Mapps, district manager of Historic Parkrose, claims that HP’s involvement is the latest in their thematic string of branding and placemaking activities directed toward underscoring the unique character of Parkrose. Like the mural, the current Historic Parkrose “LOVE PARKROSE” campaign involves an animated sticker depicting local attractions like the Rossi Farms barn, the Columbia River Gorge, and the multi-use path at Gateway Green, which has garnered citywide attraction as Portland’s first mountain bike park. “We’ve got the stickers and the street mural, and we’ll do some new street banners probably in the fall,” says Mapps. “In a year, we’ll have new garbage cans with art on them. We haven’t even gotten to the design part of the banners yet, but the new design will be different from our old aesthetic. It will probably reference the sticker while still being new and special.”