Kmart Property Not Zoned for Housing 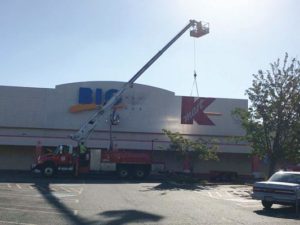 The Kmart sign is removed after the store closed in September.
COURTESY KATHY KRUG

The Kmart on Sandy Boulevard, a fixture of the Argay Terrace neighborhood since the 1960s, has finally closed after fire-selling leftover inventory and liquidating assets. The store, among 63 stores nationwide that were given their final notice in May that they would be closed permanently by the struggling retail behemoth, became the subject of much interest over the summer as rumors started to circulate about what would occupy the huge space next.

As reported previously (“What happens to the Kmart site after it closes?” MCM July 2018), New Jersey real estate development company Garden Homes had plans for a mixed-use “lifestyle center” on the property that would have both apartments and retail. The real estate firm, which has most of its holdings in Connecticut, New York and New Jersey, ran into trouble with the city blocking them from putting housing on the location—at least for the time being. The current plan for the site, as revealed by planning consultant Peter Finley Fry in June, is to build three restaurant/café/retail pads in the massive parking lot, with two on 122nd Avenue and one on Sandy Boulevard. At the same time, waiting for Kmart to leave the site and hope for a permitting change that would illuminate their options on the site or an offer from some developer to do something in the main structure.

When asked if there have been any developments since July, particularly since the store closed last month, Peter Finley Fry was blunt. “Nope. Not really,” said Fry.

Despite the Kmart closing, they haven’t stopped paying rent or vacated the property. “Sears still occupies the property. Sears is the owner of Kmart, and they have the lease,” said Fry. “We can’t even enter the property without their permission.” This permanent state of limbo continues to cloud the project, which has had an almost bizarre lack of public information about it released. Considering the new owner, Garden Homes, apparently has plans to develop the site in the next six months, little is still known.

When the plan was presented before neighborhood associations in June, there was considerable trepidation on the part of audiences that low-income housing units might move in there. In fact, a lot of people expressed concerns about having anyone move in at all, whether the housing was at market rate or not. Many residents have expressed concerns about the area overcrowding and the effect on surrounding neighborhoods in the area, which is unique for its proximity of retail, industrial and residential housing. “We got our permits in to do the three restaurants,” said Fry, somewhat confusingly continuing, “We’re hoping to have our permits by fall, which is now, but we have to build it too, and we hope to start development soon.”

Fry continued to specify that the pads could be open for business very soon. “Hopefully by spring of next year,” said Fry.

But Fry is still not specifying whether they’ll be restaurants at all, or banks or retail spots, and he would give no information on the identity of the actual businesses that will occupy those three pads. When asked about who they might be, Fry said negotiations are under way with potential tenants, but he didn’t, or couldn’t, give any more details.