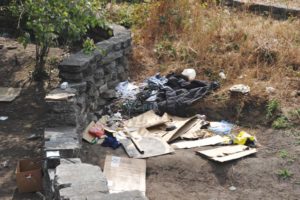 Despite getting a cleanup, brush cutting and homeless sweep in early August, the traffic rounder formerly known as ‘Windscape’ has been reoccupied.
STAFF/2018

Against the odds, one revitalization effort might be happening sooner rather than later: a $60,000 Prosper Portland grant allotted toward fixing up the “Windscape,” a Portland Bureau of Transportation (PBOT)-owned traffic roundabout island at Northeast 102nd Avenue and Weidler Street. The traffic Jughandle is known to be littered with both weeds and homeless campers, and the project itself has been a public spectacle since the first open house was quietly held this January (“Updates to ‘Windscape’ roundabout draw strong reactions,” MCM Feb. 2018). As soon as this October, computer-generated mockups could become reality.

Tom Badrick, who wrote the grant on behalf of the Parkrose Heights Association of Neighbors (PHAN), says that the design firm he hired for the project––Nevue Ngan––has reached “the final landscaping plan” for phase one of the project. Badrick promises there won’t be any last-minute surprises for those following the design process. “We’ve had the public forums and committee meetings and the meetings with the city staff, and we’re wrapping up loose ends rather than making changes in design,” says Badrick.

Phase one includes two immediate action items: the cleanup of the site, which was done last month, followed by the “planting” stage. This means removing leftover “metal clamps” that, according to Badrick, previously served to position the “living sculpture,” a series of 20-foot red poles placed on the site as part of a now-infamous 2008 site renovation. The poles were vandalized and removed by the city in 2014 (“Vandalism blows Windscape away,” MCM Nov. 2014). Badrick sees the clamps as a public danger. He worries that pedestrians could accidentally step into one of the clamps and get stuck while exploring the property.

Cleanup also includes the removal of non-native plants. These will be replaced with native specimens (e.g., the second action item of phase one). The most likely candidates for the lot are Douglas fir trees and Oregon grape bushes. Badrick views Douglas firs as a symbolic tree for the Gateway district and admits that they “get big quickly” and are “low maintenance.” He’s also considering white oak trees and manzanitas, which require little water.

As methodical as Badrick’s plans are, Windscape is not a priority for PBOT. In the end, Mother Nature––not the City of Portland––might be behind the project’s quick turnaround.

“First, somebody would go out there and physically clean the property, so we can start doing the planting. It would be better to do the cleanup before the rain starts, and then do the planting when the rain starts,” says Badrick. “Trees should be planted from November to March. We’re going to hire someone to spend a week cleaning and then a week planting, all at the same time. They’re not going to do a little here and a little there.”

As of late August, nobody has been tapped to do the work. Once the project’s final phase one design is unleashed by Nevue Ngan, it will seek a quick thumbs up from Prosper Portland and PBOT, as well as the Bureau of Environmental Services (BES). The BES controls the bioswale on the site, which will also eventually be resuscitated.

Badrick might be relying on BES to acquire some other key materials. 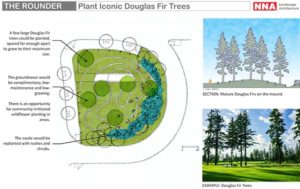 Previously, Badrick thought the Windscape redesign might coincide with PBOT’s Halsey-Weidler Streetscape Plan, which is set to break ground this fall. Badrick was planning on purchasing boulders from PBOT to lay around the lot to discourage campers (“Traffic rounder redesign committee approves final site recommendations,” MCM Aug. 2018). “We’re hoping to have BES buy the boulders,” says Badrick. “The grant will pay for them. If you purchase them through the Streetscape Project, it might have to go through city council. An interagency transfer of the funds would be easier, but we haven’t heard back.”

But the show must go on, with or without PBOT. Badrick intends to work around PBOT to ensure that the site is quickly attended to, as well as maintained––even if it means getting his own hands dirty. “We [PHAN] have the grant and will spearhead cleanup events and maybe a team of people. We’ll have a parent organization that makes sure this happens,” says Badrick. “I would have a litter team. Cleanup events go a lot smoother if you have them regularly, and I’m thinking two Saturdays a month. If I had 20 minutes between meetings I would just run over there and do it.”

Badrick’s call for help is unlikely to fall on deaf ears. The community has seen the Jughandle go through several reincarnations—none with a long-term maintenance strategy. “Sure, I would help,” says Gateway resident Ken Pearce. “That’s an easy thing to do. You spend a couple hours with your neighbors and try to make a difference. I know they’ve had teams that go out and pick up garbage along Halsey either through the business association or some other outfit, and that’s part of staying ahead of the negativity. You have people go out and try to help out where they can.”

If you would like to know more about the Windscape redesign or volunteer to help clean the area up, you can contact Badrick directly at badrickt@gmail.com or 971-325-9727.