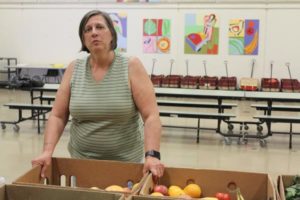 Many assume school pantries in public schools are only for the students and their families, but many are open to anyone in the community with few or no restrictions. Charlotte Davis runs pantries at Shaver, Lincoln Park and Sacramento Elementary schools. STAFF/2018

Food insecurity, the modern phrase for hunger suffered by a household, has been a growing problem nationally, and nowhere has the problem been more pronounced than in Oregon. The state increased its share of households suffering from food insecurity by nearly 40 percent between 2004 and 2015, going from 11.7 percent (just above the national average) to 16.1 percent.

East Portland has organizations that are fighting this alarming trend using food pantries to distribute food from a variety of sources.

More than 130,000 families in Oregon have members who skip meals due to lack of food. Oregon Food Bank has 21 regional banks serving the state and roughly 1,200 additional food assistance sites. Some of these assistance sites are Schools Uniting Neighborhoods (SUN) Community School Food Pantries.

SUN, a Multnomah County program, is a complex network of services and support for families that aims to improve outcomes across the board: social, health, educational and economic. SUN Community Schools use the school as the focal point for delivery of those services.

Parkrose middle and high schools and Shaver, Prescott, Russell and Sacramento elementary schools, and Jason Lee elementary (in the Portland Public School District), are all SUN schools, though not all those schools have food pantries. Russell and Prescott do not, and Parkrose High School’s pantry is not open during the summer. 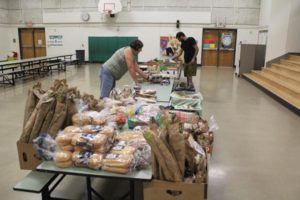 Rocio Rodriquez is the SUN manager for Sacramento Elementary. Every school’s SUN programming is different, and at Sacramento it includes extended days four days a week during the school year at which kids get special classes, homework club, recess and supper. “It’s important for managers like me to have a good relationship with principals so we can start uniting the families and improving the academia in students,” says Rodriguez. 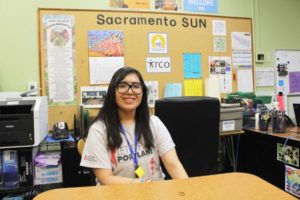 The IRCO Hunger Relief Program assistant in charge of the Sacramento Elementary School pantry (as well as Lincoln Park Elementary School in the David Douglas School District and Jason Lee Elementary School) is Charlotte Davis. “We have six fresh food pantries; I run three of them,” says Davis, “and there are also Oregon Food Bank pantries that have canned goods and non-perishables, and they can actually order things in addition to fresh stuff. We just get fresh food that is almost out of date. It’s all donated.”

The Mid-county Memo spoke to Davis and her colleague, Pedro Navarro, as they stocked a long table at Sacramento Elementary School with boxes of fresh fruit, vegetables, bread and other bakery goods. There were bags of organic kale and enough artisanal breads to feed a small army. “Pedro goes on Thursday and Fridays to New Seasons to get whatever they have there,“ says Davis.

Some fresh food pantries in schools are only available to families of the students, but some of them, like Sacramento Elementary School, are available to all community members. Based on the amount of food they had available, a lot of community members can avoid food insecurity by simply being aware of the multitude of options for free, high-quality, nutritious foods. “Usually bread is the thing we have the most of. Two of my pantries get food from News Seasons and Urban Gleaners,” says Davis. Gleaners traditionally are groups that collect fruit off trees and un-harvested fruits and vegetables, but Portland’s Urban Gleaners bring the concept to restaurants and supermarkets, gathering fresh and prepared food and getting it directly to people in a state of food insecurity. The Urban Gleaners have their own mobile fresh food markets, which are free and open to the community as well.

Each pantry run by IRCO and SUN is open one day per week, but the Parkrose High School pantry is not open during the summer. “At this school [Sacramento Elementary School], we usually have a good turnout. We probably get about 20 to 25 families right now,” says Davis. “During the school year we give out 500 to 1,000 pounds of food per week,” says Navarro.

In addition to the pantries, Davis also does a backpack program at her schools that sends kids home with food for their families for the weekend.

“A lot of people are struggling financially. They may be working, but they’re still working poor. I’ll give you an example,” says Davis. “When I was a special ed assistant for the David Douglas School District, I liked the job and I was good at it, but I’m a single mom of adopted girls; I didn’t make enough money. And so I shopped the pantries.”

From there, Davis said she began volunteering at the pantries and then became a food pantry coordinator for IRCO. “Many people just don’t quite have enough,” says Davis, “and are having to choose between ‘Do I pay this bill, or do I buy groceries?’”

Thanks to the work of Davis, Navarro, Rodriguez and their co-workers at IRCO and SUN, many families in east Portland needn’t have the stress and pain of being faced with that choice.