OSAA Academic All-Stars
The Carl’s Jr. Scholastic Star Program recognizes outstanding achievement in the classroom. Members of the top ten schools with the highest GPAs in each activity are recognized with a commemorative magnet.

Scott attended a ceremony in New York City at Carnegie Hall that recognized student artists and writers from across the country.

The Parkrose High School Symphonic Band qualified for the state competition in Corvallis. It was one of only 12 5A bands statewide to earn the honor.
COURTESY JESSE NAILL 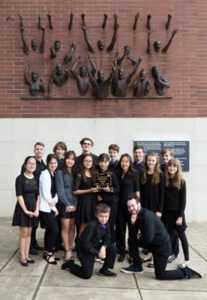 CHOIR
The Parkrose High School A-Choir, Women’s Chorale and Men’s Chorale received the gold award from the American Choral Directors Association for achieving superior scores in festival competition. Parkrose was the only NWOC school with all choirs achieving this honor.

The A-Choir also qualified for state with scores in the 90s and was commended by the OSAA for this achievement.

FBLA
Parkrose students and their projects placed in the top four at the state Future Business Leaders of America competition to earn a trip to nationals. The team had first-place entries in introduction to information technology and insurance and risk management, second place in graphic design, third place in business law and fourth place awards in community service project and business financial plan.

The community service project raised $2,600 for homeless youth in Parkrose. 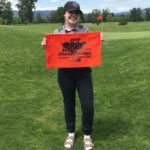 GOLF
Parkrose Bronco Shelbie Dunn took fourth place at the regional tournament which qualified her for the OSAA state golf tournament, where she placed 10th. She was named first team all-conference.

According to the American Association of Teachers of Spanish and Portuguese, which sponsors the exam, “Attaining a medal or honorable mention for any student on the National Spanish Examinations is very prestigious because the exams are the largest of their kind in the United States, with over 150,000 students participating in 2018.”

LETTER OF INTENT
State champion wrestler Anthony Cha (132 pounds) of David Douglas High School has signed a letter of intent to wrestle at Warner Pacific University in southeast Portland. Warner Pacific is a member of the National Association of Intercollegiate Athletics and the Cascade Collegiate Conference.

TRACK & FIELD
Ahmed Ibrahim led the Parkrose High School contingent that competed at the OSAA state championship meet. He placed fourth in the 1,500-meter run and seventh in the 800. Hassan Ibrahim, also a distance runner, placed 10th and 11th in the 1,500- and 3,000-meter events, respectively. Shariayah Crews also competed at state.

The Broncos sent a trio of runners to the OSAA state championship meet in Eugene and collected a host of conference honors this season.
COURTESY MW PHOTOS

Portland Christian High School was represented by more than 50 athletes for track and field events this spring. The Royals placed third at its district meet and sent a nice contingent to the OSAA state meet at Hayward Field in Eugene.

“Phone Drones,” by the seventh-period advanced video class, also made it into the state finals. The video was directed by Erich Dettmann and edited by Shanahan Sweet. n