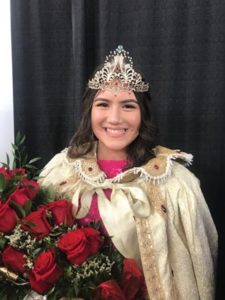 For the first time since 1988, when Parkrose High School became eligible to participate in the Rose Festival Court as a city high school, a Parkrose senior (Kiara Johnson) has been crowned Queen of Rosaria. The new queen will reign for one year.
COURTESY ROSE FESTIVAL FOUNDATION

Before graduating this year, Johnson was a varsity volleyball player as well as captain of the track and field team. She was the sports editor for the Bronco Blaze, the school’s paper, and works part-time at the Shilo Inn near the airport. In July 2017, she participated in the High School Journalism Institute at Oregon State University.

Each Rose Festival Court member receives a $3,500 scholarship courtesy of The Randall Group to use at a college of their choice.

As the Rose Festival’s number one ambassador, the queen makes an annual trip to Kaohsiung, Taiwan, with the Sister City delegation. Johnson’s duties as queen include attending parades and the Pendleton Round-Up in September, participating in Rosarian knighting ceremonies and overseeing the Dragon Boat Awakening Ceremonies in March. In addition, like every other Rose Festival queen, she will sit for a portrait donated by the Oregon Society of Artists.

Though interested in sports and journalism, Johnson hasn’t decided yet on a career path, only that she wants to continue her education. Next year, she plans to attend Clackamas Community College before transferring to a four-year university. When it comes to what she will study, “I’m open to anything,” she told The Oregonian.

The Mid-county Memo asked Kiara Johnson, Parkrose High School’s first Queen of Rosaria, to tell us how she plans to use this platform to promote Parkrose High School and the Parkrose community. In addition, we asked her what has surprised her about the experience, what has been the greatest difficulty she has overcome on her journey to being queen and whom she’d like to thank. Her answers: 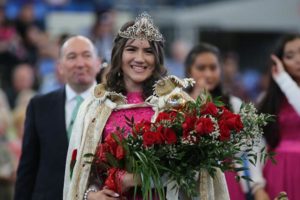 Saturday, June 9 Kiara Johnson, a senior at Parkrose High School, was named Queen of the fictional kingdom of Rosaria. She is Parkrose’s first queen since the school became eligible in 1987 due to the city’s annexation of Mid-Multnomah County by the city.
COURTESY MARK GRAVES, THE OREGONIAN

“Considering how involved I am in the Parkrose community, I am honored to represent so many amazing people. As many people know, I am involved in volleyball, track & field, Mock Trial, We the People Constitution Team, the Bronco Blaze school newspaper, CSU, Asian Youth Society and much more. With that, I have had the unique chance of getting to know a variety of people from Parkrose. With being crowned queen, it excites me that people now have a better chance to get to know who I am, and therefore understand Parkrose.

At Parkrose, we are proud to claim that we are the most diverse public school in Oregon; however, with that comes other statistics that are well overlooked. A huge amount of the student body from Parkrose comes from low-income families, and the lack of a family connection at home is made up for at Parkrose. There are so many students, including myself, that play multiple varsity sports and are involved in clubs, all while maintaining a part-time job. Becoming queen is one of the many accomplishments from the Class of 2018 at Parkrose.

By being queen, I hope to shed light on the brilliance of Parkrose. People that disregard Parkrose based on our statistics, before even getting to know the students, are missing out on a true sense of community. Now that Parkrose has a Queen of Rosaria, we are being looked at. I am always eager to answer any questions people have about Parkrose. As I continue to represent the Rose Festival, I will always keep Parkrose in my mind and heart.

Being on the court has truly changed my life. The princesses and I always joked about each other’s personality types and unique mannerisms. Aside from the jokes, I learned a lot about myself by learning about others. I truly discovered the love I have for people and how rewarding it is to fill someone’s imaginary bucket (a lesson we learned while being on the court).

The greatest difficulty was not being able to work. Before being on the court, I was working at the Shilo Inn Hotel Restaurant and relying on my paychecks every two weeks. However, I made up for that by working part-time as a Postmates Delivery Driver.

Although it was a struggle, I wouldn’t exchange it for the lifelong friendships I made with 13 other girls. I am so thankful for the princesses and all our chaperones for the best five weeks of my life. I have learned so much about Portland, the Rose Festival, my fellow princesses and myself. I encourage any young girl to take advantage of this opportunity, because often we sell ourselves short. The Rose Festival has shown me the true potential I have for greatness, and as queen I hope to exceed the expectations set upon me.”