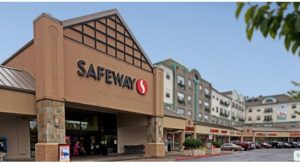 The Safeway store in the Glisan St. Station is set to close next month.

“Like all retailers, we are constantly evaluating the performance of our stores,” Jill McGinnis, Safeway’s director of communications and public affairs said in an email. “Closing an under performing store is always a tough decision, but we are focused on growing our business by being the favorite local supermarket, and running great stores where people love to shop. That’s what will enable us to offer the products and services our customers value most in this market.”

Safeway is “working with the affected employees and the labor unions, where applicable, to attempt to find them other work that is both consistent with the applicable law and/or labor agreement,” McGinnis added. She also said that it is standard for Safeway, when closing a store that is under-performing, to place all of the employees.

The grocery store, in the Glisan St. Station Shopping Mall in east Portland, is across the street from the recently closed Hansen Homeless Shelter, which had nearly a two-year run in the former Multnomah County Sheriff’s Office building.

Even though Safeway did not give a reason why the store was under performing, correlating the homeless shelter’s opening with a rash of shoplifting incidents, and an increase in disruptive activity outside the store, may have contributed to its “under performing,” causing the store’s closure.