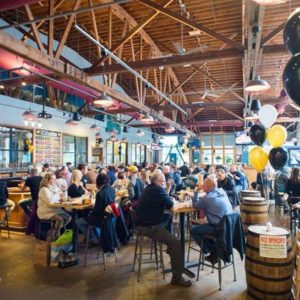 East Portland will soon become home to Portland’s only craft beer designed specifically for golfers––and yes, it’s set to be brewed on a golf course. The Pearl-based brewery Von Ebert Brewing is opening a 9,000-square-foot second location on the Glendoveer Golf Course in the former location of the dearly departed Ringside Grill (14021 N.E. Glisan St.).

If you’re wondering how one of Von Ebert’s founders, Tom S. Cook, uncovered the most golf-friendly beer recipe, it didn’t require as much detective work as you might assume. “We asked the Glendoveer office what the best-selling beer is,” says Cook, who grew up in Vancouver, Washington, discussing the evolution of his golf beer. “They said ‘Coors Light.’ And I said, ‘I’ve got to change that.’ So, we’re working on a beer called the clubhouse lager, a light German lager that is similar in ABV to a Coors Light, but a lot more flavorful and made right there on the golf course. We’re going to do our absolute best to hit that price point for folks, as we think people like that Coors Light is the cheapest.”

Von Ebert’s Pearl District location (131 N.W. 13th Ave.) opened earlier this year after Cook closed the Portland chapter of Fat Head’s Brewery, launching an independent brewpub in its place. The Pearl location specializes in high-volume beers, like IPAs, as well as pilsners and fruit beers. But for Glendoveer, there will be a focus on mostly mixed fermentation and sour beers, as well as some German lagers and French saisons. Cook has been a part of the Portland brewing scene for four years. Beer fanatics will also note that Von Ebert has employed brewer Sean Burke, who left ill-fated The Commons Brewery before it closed its primary facility last fall.

Ringside Grill closed last August. Cook says he’s been working on the Glendoveer location for more than a year.

While a beer made for golfers seems a bit out of the box, even for Portland, Cook stands by his imagination. He sees the Glendoveer location of Von Ebert as an opportunity to indulge patrons with some of the kitschiness that Portland demands from its bar scene. After all, the McMenamins chain includes a location set at a historic elementary school, while Parkrose’s only other big brewery, Level Beer, is stationed in what was a retail produce outlet and greenhouse.

“There are only a couple breweries in the United States situated on golf courses, but it’s also a very Portland thing to have a brewery on the golf course,” says Cook, who believes Von Ebert’s upcoming sister location will be more lodge-themed than golf-themed. “There’s not a lot out there [in east Portland], especially when you compare it to other parts of the city. So going east was kind of a priority. We always keep our eyes peeled for cool and unique real estate that comes available. There’s a lot of density, a lot of people who live out there but work in the city. From my perspective, if I’m going to go have a beer, I like to have it where I live.”

Cook believes Von Ebert separates itself from Level Beer, its main local competitor, by focusing on “mixed fermentation souring-type stuff that is oak heavy.” According to Cook, Level’s beer lineup tends to align itself more with the style of Von Ebert’s Pearl location by capitalizing on hops.

Both Von Ebert locations will have some crossover in terms of beer and food with a menu Cook describes as “about 85 percent similar.” Yet, Glendoveer’s menu will appeal to both golfer taste buds and their schedules. “We’re working on some different things. We’re working on a new pizza, and we want it to be a city-specific pizza. I’ll put it to you that way,” says Cook. “We’re trying to work through whether we want it to be New York- or Chicago-style, but we do want to do a unique style. Right now, we’re testing. I’m working on a new burger, and we’re also working, from a golfer’s perspective, on some golfer-friendly items that are faster, quicker and easier to eat on-the-go.”

Even if you don’t golf, Cook thinks you’ll want to experience the creative juices flowing from Von Ebert’s taps. While the Glendoveer location is smaller than the Pearl location, there’s plenty of room for everybody.

“I think golfers will be a good chunk of our business, but one of the reasons we really wanted this site is that there are 84 parking stalls just for us. Not a lot of restaurants can say they have 84 parking stalls. I think it’s going to be kind of a unique project in that the beers coming out of Glendoveer will be unique with the mixed fermentation, which I’m excited about. I think a lot of the public will want to stop by for a beer and some wings.”

Von Ebert east doesn’t have a firm opening date. Cook says you should be able to experience both a golf hole and a watering hole at Glendoveer this summer.

For more on Von Ebert Brewing, check out their website at vonebertbrewing.com.