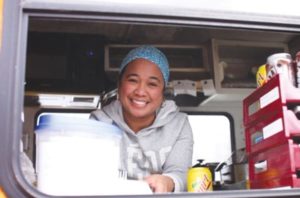 The American dream is alive and well in the food industry. When Old Country Sausage (10634 N.E. Sandy Blvd.), a German-immigrant founded European deli, shut its doors this spring after 40 years, the same doors opened for an immigrant from the Philippines with a brawny ambition to open a brick-and-mortar location for her Filipino barbecue restaurant Fork & Spoon Food House.

Erwina Barney, owner of Fork & Spoon, as well as the defunct food cart Erwina’s Inasal Filipino BBQ, couldn’t help but see the writing on the wall when Old Country Sausage’s space became available. “In March 2018, I learned that the space was becoming available, as the owners were looking to move because of health reasons,” says Barney. “I learned this location has been a sausage deli for 40 years. It has been through three different families. The last family was looking to sell the whole business, but I guess nobody could put an offer together, so they took all their equipment and left a vacant building. I was looking for a space to start my restaurant, and this feels like the perfect location.”

While Filipino barbecue and European deli meats might not speak to the same taste buds, both restaurants have more in common than their silverware. Both Old Country Sausage and Fork & Spoon Food House reflect the bounty that coincides with an influx of diversity in a developing neighborhood.

Parkrose, incorporated in 1911 with the help of mainly Dutch, German and Italian immigrants, has seen another wave of immigrants in recent years, akin to the rest of east Portland. However, not all new residents are from different countries; many individuals and families, specifically African Americans, are forced east after being priced out closer to the river. Still, immigrant populations are growing.

In 2017, Portland State University’s America on the Move project released data revealing that during the two-year period between 2012 and 2014, 22 percent of new Portland residents weren’t born in the United States, a 14 percent increase from the 2008 to 2010 period.

The Oregonian, in a Dec. 2015 piece, also predicted that east Portland would see a large increase in businesses and cultural institutions from immigrants stemming from the Middle East, Southeast Asia and the Horn of Africa. “First, let me tell you that it has always been my dream to cook for people and run my own restaurant,” says Barney, who was born in the Philippines. “I got my first business opportunity to open my food cart (Erwina’s Inasal Filipino BBQ, which Barney operated from 2012 to 2016). After that, I continued catering until last year, when I decided to open a restaurant.”

For Barney, making the transition from a restaurant on wheels to a proper storefront allows her to foster the kind of community a food cart can lack with its grab-and-go culture. “As for differences from the cart, the first would be to create a place people can come and sit at while eating,” says Barney. “Customers can sit and visit and meet new and old friends; in the Filipino language, it is called ‘tambayan’ [‘meeting place’].”

On the merging of her two cultures, Barney points to her business’s title. “I called it Fork & Spoon because while Americans and Filipinos both use the fork and the spoon, each culture uses them differently. This name is kind of bringing together both cultures with both foods; a place where everybody can just come to sit and eat good food and enjoy the company of good people. I do not believe I am bringing something unique to Parkrose. All the people I have met from this area are so friendly and amazing, I just want to give them a place to sit, eat and hangout. Not fast food, but good food as fast as I can.”

However, in the Parkrose area, there may be a shortage of Filipino barbecue restaurants, not unlike German delis. “I know that there are two Filipino places around Southeast Foster, and the other is located, I think, in Beaverton. Sometimes I would hear a cart might open now and then; I’m really not sure though,” says Barney.

Barney claims she was born in the Philippines “with spoon in hand,” which gave her a love for cooking for groups. Before meeting her husband in 2007 and immigrating to the United States in 2009 to get married, she grew up caring for her aunt’s family and attended high school and college in her native Philippines. Upon moving to the United States, Barney attended the Oregon Culinary Institute in downtown Portland. “The OCI was an amazing experience that further cemented my desire to run my own restaurant,” says Barney. “The chefs and instructors were so friendly and very helpful. Then in 2012, I found a friend selling their cart. I scraped together enough money to buy it and opened my very own business cooking meals and catering from 2012 to 2016.”

As for Fork & Spoon’s menu, you can expect delicacies you’d be hard-pressed to match west of 82nd Avenue.

“There will be the old favorites from the cart: the adobo and pancit, as well as more items,” says Barney. “Because it’s a building, I have more storage and refrigerator space for more ingredients. I am still working on my menu, but I can tell you it will include some American eats like burgers and sandwiches, and my husband has a delicious family macaroni and cheese recipe that I will put on the menu. Also, I will be making traditional desserts like halo-halo [‘mix-mix,’ Filipino shaved ice), leche flan and biko, just to name a few.”

There’s no definitive opening date for Fork & Spoon Food House, 10634 N.E. Sandy Blvd., while Barney wraps up inspections and the licensing process, but she claims that she plans to open “hopefully very soon.”

Receive all updates concerning the grand opening of the Fork & Spoon Food House by checking its Facebook page at facebook.com/erwinasinasalfilipinobbq.