If you’re sending a submission, include all details that apply: individuals’ names, details of the milestone and a contact name and phone number. If you have photos, send them. The submission deadline for the July issue is Friday, June 15. For best results, e-mail editor@midcountymemo.com or mail submissions to 3510 N.E. 134th Ave., Portland, OR 97230. Call 503-287-8904. 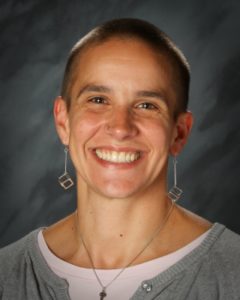 J. Geurts is a 2018 180 Educator and a 2018 Circle of Excellence Educator. Dan McCue, David Douglas School District communi-cations, said, “I can’t think of another example of a teacher receiving two such awards at virtually the same time.”
COURTESY DAVID DOUGLAS SCHOOL DISTRICT

Floyd Light teacher honored for inspiring her students to achieve
Global learning company Houghton Mifflin Harcourt (HMH) announced that J. Geurts, a math teacher at Floyd Light Middle School, has been named one of only six recipients of the prestigious 2018 180 Educator Awards. The awards, now in their 12th year, recognize educators across the United States who have helped advance the trajectory of their students’ progress in reading and math, fostering both personal and academic growth.

Geurts is being recognized for guiding her students to great success. A leader in the David Douglas School District for students and teachers using the intervention program MATH 180, Geurts helps the most challenged students grow to view themselves as “true mathematicians” with her preparation, dedication and compassion. Her ability to see and understand the needs of students with special learning challenges has contributed to impressive growth and achievement in her classroom. Additionally, Geurts serves as a mentor for MATH 180 peers across her district, helping to brainstorm classroom management strategies and foster new ideas for moving students forward. According to one student, “I have had many great math teachers who have helped me, but none have given me the strength, encouragement and tools that Ms. Geurts has.”

“I start with lots of structure and predictability until kids get used to me being really reliable, and then they start to trust me,” said Geurts. “Once they trust me, I can push them further than they maybe thought they could be pushed. Once they get used to that pressure, they will start to push each other, and then eventually they start to push themselves, and at the point that they are owning that challenge, excellence just sort of becomes a habit.”

In addition to this award, Geurts was also acknowledged by OnPoint Credit Union as a 2018 Circle of Excellence Education award winner. The honor includes a $1,000 cash award plus a $500 donation to Floyd Light Middle School.

Beth Wilson, a volunteer in Geurts’ class room said, “To watch low-performing students with no confidence in themselves or their abilities transform into high-performing, self-confident individuals is invigorating.”

PBS Digital Innovator All-Stars will spend the 2018–2019 school year deepening engagement among students, families, educators, schools and their local PBS stations. As an exclusive part of the program, they will have access to virtual and in-person events, including the PBS Digital Innovator All-Star Summit, to connect and learn with their peers and station representatives from across the country.

One of them praised her this way: “I think Andrea really wants to make our school a great place to work and be a student. She is always looking for new ways to recognize students; she volunteers to help all over the school, and you will never hear her say, ‘That’s not my job.’ I also appreciate that she tries to make our building a fun place to be by organizing outings or events where we can bond and have fun as a staff. She pushed to implement a leadership class that has created opportunities for students who may be non-traditional leaders to thrive and grow, as well as doing great things throughout our school.” 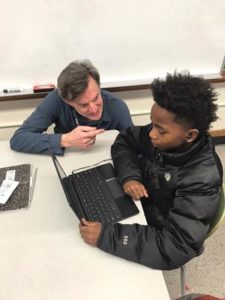 Math teacher Bruce James has been recognized for going out of his way to help students at Alice Ott Middle School.
COURTESY DAVID DOUGLAS SCHOOL DISTRICT

Bruce James has become the latest David Douglas teacher to be singled out by his peers for inclusion in the districts Cadre of Distinguished Educators. James teaches math to sixth- and seventh-graders at Alice Ott Middle School.

According to one of his peers, “Bruce goes out of his way to teach those students that most need support in math. This year he willingly moved from teaching advanced sixth-grade math students to teaching the sixth-grade math students who are struggling to catch up. He has taken this on in addition to all the other classes he teaches and while staying after to lead after school classes and keep kids excited about learning.”

Soccer for kids
Register now for Parkrose Youth Soccer Club. The club accepts boys and girls from 4 to 13 years old. Go to parkrosesoccer.com to learn more and to sign up. 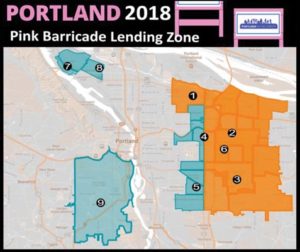 Celebrate in the streets
Have you heard? Block parties are now free throughout Portland. That’s right, you can get a permit for a neighborhood block party for zero dollars. Not only that, but the Portland Bureau of Transportation (PBOT) is pleased to announce that it has doubled the size of its Pink Barricade Lending Zone for 2018. This means more Portland neighborhoods will be celebrating in their streets this spring, summer and fall with easy access to our pink block party barricades.

The original pilot project was launched in neighborhoods in east Portland with great success in 2017, according to PBOT. Portland residents in these neighborhoods told PBOT that the free Block Party permit and free barricade checkouts made hosting a block party a breeze. Many said that they plan to make block parties a new tradition, having connected with their neighbors in new, meaningful ways.

To keep this momentum going, PBOT has expanded the Pink Barricade Lending Zone by adding 26 neighborhoods in Southwest, North and east Portland (see map above). This addition almost doubles the number of neighborhoods who can check out our bright and fun pink street barricades for free.

Consortium opportunities are aligned with the Workforce and Career & Technical Education (CTE) efforts, the regional East Metro STEAM Partnership (EMSP) STEM Hub and AVID for Higher Education and include the following types of activities:

•Equip high-school counselors with the knowledge and resources to better inform students on pathways into traditional and CTE post-secondary opportunities. 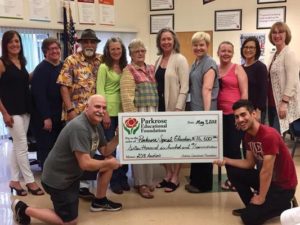 Special ed classes get boost from PEF
The Parkrose Educational Foundation (PEF) presented a check in the amount of $16,600 to Parkrose special education classes last month. The funds were raised during the appeal bid at the annual PEF dinner and auction.