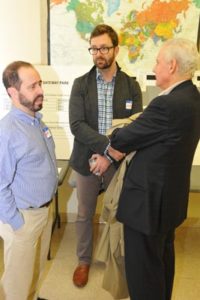 Thursday, May 10, saw the Gateway Area Business Association’s (GABA) monthly luncheon at the El Indio Mexican restaurant on Halsey Street. Attended by local Gateway business owners and other concerned stakeholders, the meeting was another opportunity for Andy Miller, executive director of Human Solutions, to update the community on the progress of the mixed-use development overlooking the soon-to-be opened Gateway Discovery park on Halsey Street between Northeast 105th and 106th avenues.

Last month, Miller gave a similar presentation at an open house hosted by Gerding Edlen, the real estate firm leading the project. “We are a social service and community development agency that has been serving east Portland and all of east Multnomah County for the last 30 years,” Miller opened, introducing Human Solutions to the audience, which undoubtedly must have already been at least somewhat familiar with what they do. “We’re here today because we’re about to become your neighbors here in Gateway,” said Miller. He then went on to unveil the latest sketches and computer renderings of what the new development will look like. As has been covered in these pages previously, the development will include 75 units of housing (with 40 being “affordable” and 35 at market rate), 10,000 square feet of retail space and 10,000 square feet on the floor above that space that will be Human Solutions’ new headquarters. Construction is set to begin in December of this year and is slated to finish in 2020.

Dave Otte, an architect from Holst (the firm that designed the development) was also on hand and walked the audience through the technical specs. “A couple of major components that we had to figure out: one, where does the parking go?” Otte proposed what would become the hottest item of the day, continuing, “[Second,] where does the housing go? The housing is going to be the biggest part of the building, and it’s going to have the biggest impact on how this building affects your neighborhood.”

Midway through Otte’s presentation, a GABA member asked about the location of the parking for the structure. Otte brought up sight plans to answer the question—51 total parking spaces to serve the 75 units, the offices and all the retail space. “We don’t have one parking space per apartment, but if you look at all the buildings going up, we have a higher ratio than the average that’s going around town,” said Otte. When pressed for more details, Otte described a breakdown of 10 spots for the offices, 10 spots reserved for retail and the remaining going to the housing, however the overall ratio of spots per 1,000 square feet is about 0.6 (51 spots for 85,000 square feet), far less than the sought-after golden ratio of 4:1 or even a more conservative one or two spots per 1,000 square feet.

The fire access lane is on the private drive that will be built, fortunately, so outer street parking around the parcel shouldn’t be terribly limited on 104th and 106th avenues and Clackamas and Wasco streets. However, the Portland Bureau of Transportation plans for a new island, and other bike lane additions will also see street parking pared down on Halsey Street. In short, there’s a parking shortage here. And there’s a very pronounced reticence on the part of many of the Gateway business owners to embrace new subsidized retail space in their backyard that might become empty due to lack of parking, a longtime retail-killer. “You can’t do retail with only one parking space per 1,000 feet,” said Jack Hagan, owner of Northwest Fly Fishing Outfitters on Halsey Street, which itself enjoys a robust 5:1 ratio in its own lot.

Another owner at the meeting pointed out that with a lack of parking, the retail business was in danger of creating one of the things adjacent businesses hate most from a large retail space: vacancies. “We’ve represented to our staff that they’re the last priority for parking,” answered Miller, in regard to the Human Solutions staff, who would also be in the mix. Miller noted that the plan was for priority to be given to the retail and office parking during the day, when presumably people from the housing units would be away at work and need the spots less, though it’s unclear how that prioritization would work, exactly. Otte than interjected that the most they could even do under current codes for the area would be a 3:1 ratio.

Also noted at the meeting was that among the community responses regarding what should occupy the retail space included a brewpub and a supermarket. Following that input, talks were already starting with potential occupants on an exploratory level. How a large pub in a subsidized location would affect the numerous local pubs already in the area (including four within just a few hundred yards of the new development), or whether a supermarket would be a necessary addition within a quarter mile of a Fred Meyer, a Safeway, two WinCos and a half-dozen smaller markets are questions that still need answers.