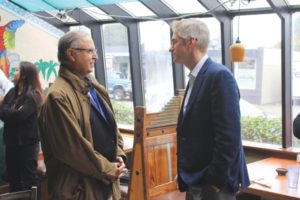 “I’m delighted to be here in Gateway today,” opened Mayor Wheeler before reeling off a list of accomplishments and plans for the east side of Portland.

One of the major areas the mayor touted to GABA members was the city’s investment in the area. Unlike Commissioner Eudaly’s talk, which featured more of her general political and philosophical beliefs, Mayor Wheeler stuck to economic concerns more likely to be on the business community’s radar.

“The Gateway action plan takes a geographic approach, focusing investments on three specific areas: first of all, the Halsey-Weidler business district—we’ve committed to a $20 million investment there. The Gateway Transit center—we’ve committed to $8 million. The central Gateway Area—an additional $2 million, and then the Opportunity Fund does not have geographic boundaries, but in total it offers up $5 million in additional direct investments,” said Mayor Wheeler in a brief speech before fielding questions from the audience.

“Looking forward, there are a couple of big projects I want to bring to your attention,” said Wheeler, citing the complex set to go in next to the still-incomplete Gateway Discovery park, which will add 75 living units, 12,000 feet of retail space and the office headquarters of Human Solutions, the nonprofit that plays heavily in the homelessness issue currently facing the city. 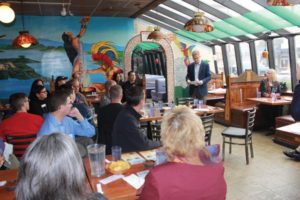 The mayor also described the memorandum of understanding being entered into by Prosper Portland and several property owners and community groups in the area “to develop 10 acres near the Gateway Transit Center, with a long list of goals” including classroom and lab space, performing arts space, senior living and nursing, office and retail space, an elementary school and additional housing, all of which to be backed by $13 million set aside by Prosper Portland. “People see this as an economic shot in the arm and an improvement of livability for east Portland generally,” Wheeler said. “But I also want to assure people that there will be a very robust community engagement process around that development.”

In the Q&A portion of the meeting, Wheeler was put on the spot by the emotional director of operations for Loud Lab, a cannabis extraction facility on Northeast 107th Avenue in Parkrose that is licensed and regulated by the state’s Oregon Liquor Control Commission. “I collectively represent 300 Portland residents in the cannabis community who are currently laid off. We desperately need your help with the permitting process, because we’re having delay after delay that are having us teetering on the verge of going out of business.”

“I support the cannabis industry,” said Wheeler, before referring the issue to his chief of staff, who took information from those present and assured them he’d investigate the matter.

Wheeler was also confronted by Jack Hagan, owner of Northwest Flyfishing Outfitters, for not backing up the promises made on his campaign and administration website. As he highlighted last month at the GABA meeting and in an interview in last month’s issue of the Mid-county Memo, the number one issue Hagan faces with his business is the gathering of homeless community members in his parking lot and nearby. “We need help in Gateway! I’m tired of hearing how great a job you’re doing for Gateway and the people. We need to see some results out here. We need to see more police officers,” said Hagan.

Mayor Wheeler assured Hagan and the other business owners present that he was not merely paying the issue lip service. “I do this approximately 15 times a week, and this is the number-one issue,” said Mayor Wheeler. “I hear it everywhere I go.” He then listed his police-staffing bona fides, including increasing funding for police officers, the park ranger presence in east Portland, and an RV program to get environmentally hazardous and dilapidated RVs off the road. “But to sit here and say these things are going to happen quickly would be disingenuous to you,” said Mayor Wheeler, noting he would be asking for 80 new police officers in the next city budget and that such a move would not be popular everywhere. “But the main message I want to share with you is that I absolutely share your frustration.”

Mayor Wheeler drove home the point that he felt the frustrations of the homeowners and business-owners in the area, mentioning a meeting he had with the mayors of Vancouver, British Columbia and Seattle and how he told them this was his focus. He continued, “If I’m a one-term mayor, this is the issue why.”